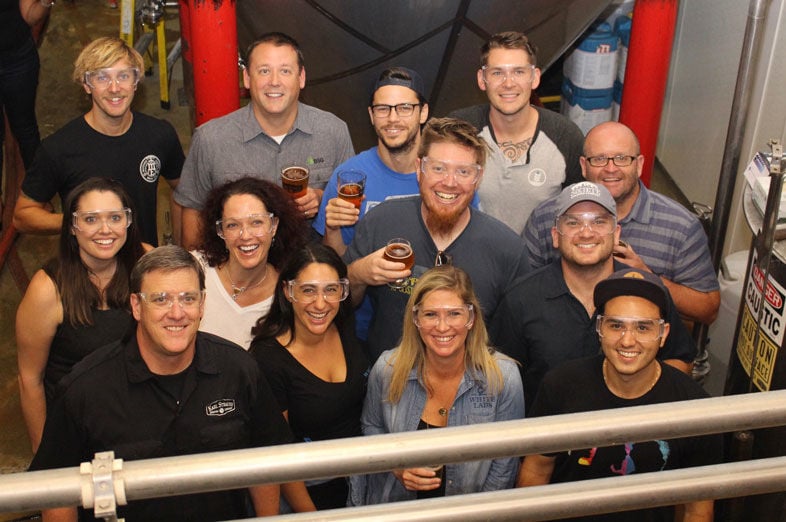 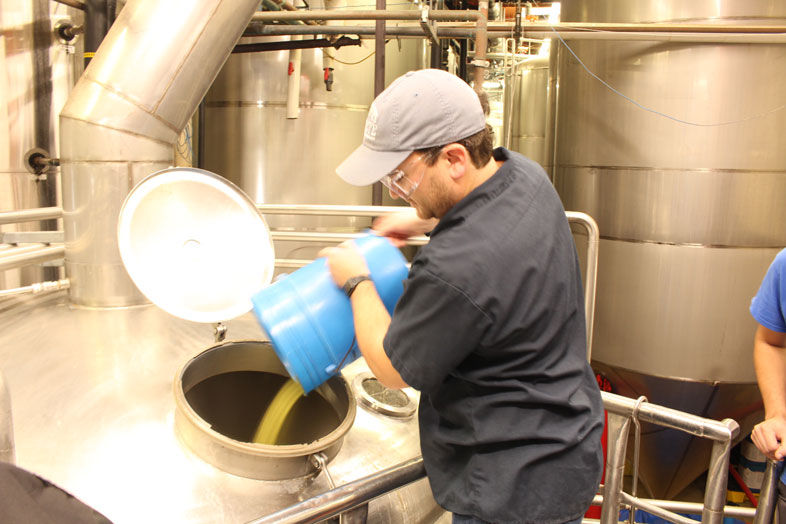 "I’m not sure exactly what took us so long to do this," says Paige McWey Acers, executive director of the San Diego Brewers Guild. She’s talking about the guild’s newest annual tradition: brewing a collaboration beer with a large group of member breweries and debuting it at the start of Beer Week.

"It was something we were toying with and trying to plan logistically for a while," Paige says. "It wasn’t easy figuring out the best way to coordinate with all the breweries that we have. Andrew Wilde from Karl Strauss came to me and asked, ‘Why aren’t we doing this?’ So the two of us sat down and figured out just what we needed to do to make this project happen."

The guild decided that every year, one brewery will volunteer to host a "Capital of Craft" brew, and seven other breweries and brewing teams will come together to make it on brew day. Last year, Coronado was the first to volunteer to host the collaboration; this year Karl Strauss offered up its brewhouse for the endeavor.

Making the Capital of Craft beer is about much more than providing SDBG members with a collaboration opportunity. It’s also about creating a project that speaks to the core of what the guild is about. "We felt it was really important to have something that exemplified the collaborative spirit of San Diego beer to our fans," Paige says. "The brewer community understands collaboration and values it, but we wanted to make sure we had a project that would allow our fans to experience it as well."

It looks like, for the foreseeable future, every Capital of Craft beer will be some kind of IPA. "We have our specific San Diego–style IPA," Paige says, "so it’s really about owning that as a region. And on top of that, it’s a little easier to sell an IPA, which helps ensure that the breweries aren’t stuck with a style that’s hard to move."

This year’s recipe team decided to do a medium-bitter IPA that would combine Old World and New World hops in a 6.5 ABV beer. The grain bill is mostly 2-Row pale malt with some white wheat malt thrown in. Special adjuncts include an addition of agave syrup, which should provide a hint of sweetness on the finish. BSG Craft Brewing donated the hops and malt for the brew, and San Diego–based White Labs donated the WLP001 California Ale yeast.

"Clearly, the recipe was going to be an IPA," explains Tomme Arthur, cofounder of Port Brewing/The Lost Abbey. "It would be tough to do anything else in this town."

Tomme provided some details about the thinking that went into crafting the specific recipe. "We kind of ended up with this Old World/New World mentality; there were a lot of cool Old World hops, like Comet, and then there was New World stuff, like Idaho 7. So the kettle hops [bittering hops] were going to be older and the aroma would be new hop varietals." In a way, this old-and-new mentality reflects on the team’s mix of established and veteran breweries as well.

"I walked away from the final recipe development thinking it was going to be a very cool beer," says Tomme. "We don’t generally brew beer with those ingredients, and I was really looking forward to the use of the Comet."

For the SDBG members as a whole, the Capital of Craft collaboration provides a welcome reason to get together and even meet each other for the first time, share ideas, and socialize before the hectic and demanding schedule of Beer Week takes hold. "The biggest opportunity here is collaborating with people that we’re aware of but haven’t seen in a while or who haven’t been to our brewery," Tomme says. "So this is the chance to meet new people. I think about half the people in the group haven’t really spent much time with each other, and that—on a collaborative level—is probably something you don’t see a lot of. I love the fact that there’s a special beer for Guild Fest and for Beer Week. I love that it’s collaborative and I love that it has overlap—it’s more than just two people working on something together."

Capital of Craft IPA will make its debut on the first day of Beer Week and will be available on draft at select locations around the county. For more information about the beer and about Beer Week 2018, go to sdbeer.com.