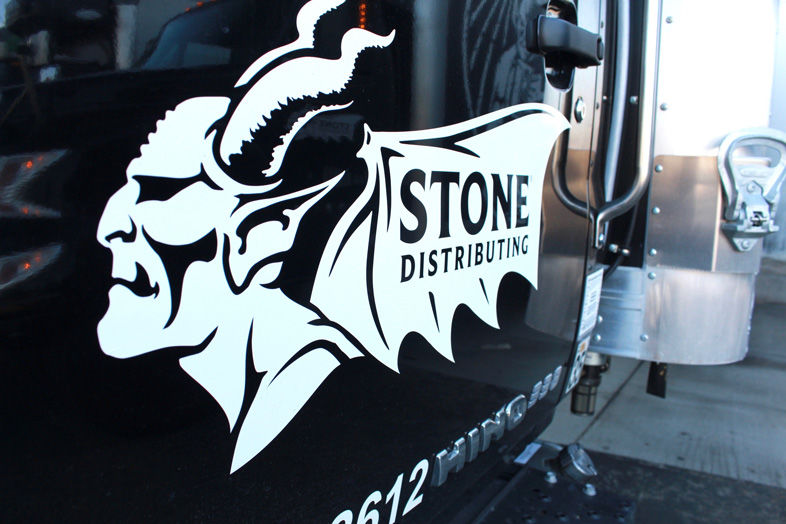 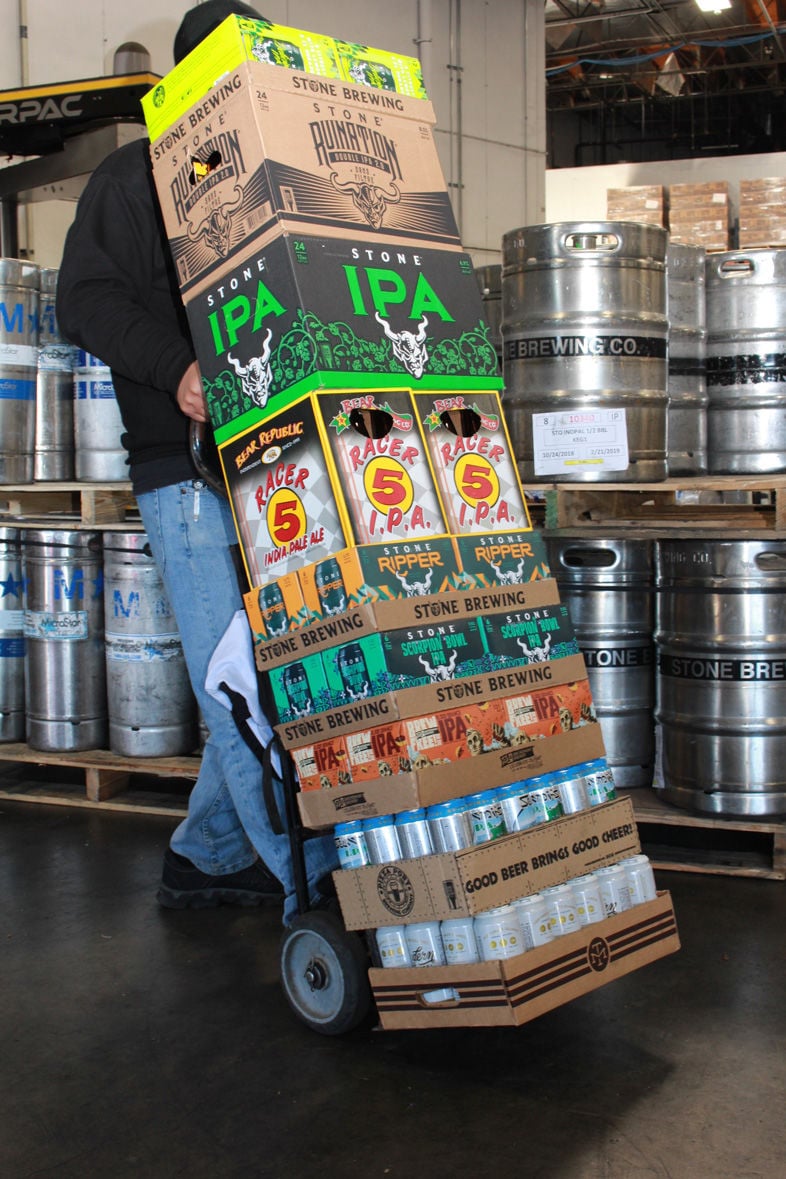 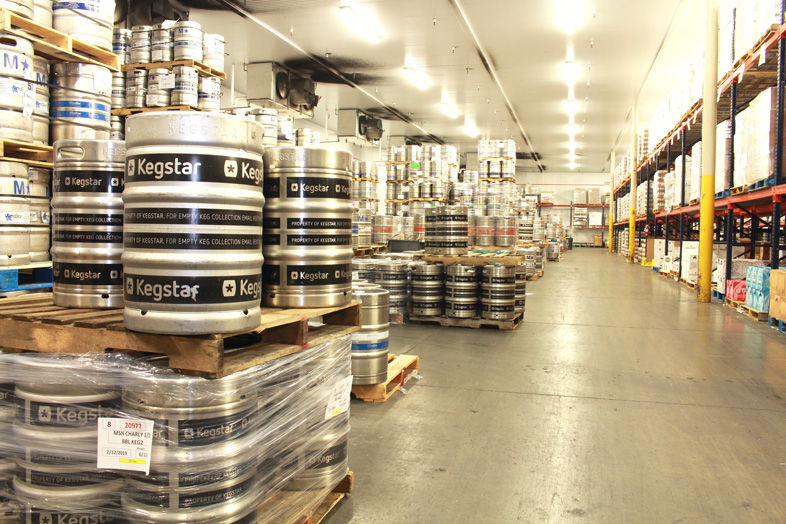 When most people hear the name Stone, they think brewery. That makes a lot of sense. Stone is the ninth largest independent craft brewery in America. It’s also probably San Diego’s best-known brewery—certainly one of the most iconic. As well known and influential as Stone’s beer is, it may surprise you to learn that the company is equally influential as one of San Diego’s largest distributors of craft beer. They put craft beer from lots of other breweries on shelves all over Southern California.

Stone Distributing Company represents about 45 different craft beer brands from all over the country. Their distribution territory encompasses about 40,000 square miles.

"Out of necessity, we actually started self-distributing Stone as soon as we opened in July of 1996," says Stone cofounder Steve Wagner. That exact point in time, according to Steve, was also the "first downturn in craft beer," and finding a distributor to take on a new brewery was not an easy task. "Distributors were saying, ‘This is a fad. This thing is over. We don’t want to talk to any new breweries.’" With little interest from distributors, the company decided that Stone would build its business to a large enough size that, in a few years, it would be attractive to a big beer distributor. "The last thing we wanted to do was get into the distribution business," Steve says. "We wanted to brew beer and sell it. We wanted to be a brewery."

Part of Stone’s reluctance came from the fact that distribution is a tough, capital-intensive business with lots of risks. A successful company must navigate a complicated network of logistics and weather all the financial exposure that goes with it.

If you’re wondering exactly what a beer distributor does, here’s the quick explanation: They purchase beer from a brewery at a wholesale price and then turn around and sell that beer to bars, restaurants, grocery stores, independent liquor stores, sports venues, and the like. For a smallish brewery that wants to increase production by expanding its accounts and the reach of its product, signing with a distributor enables that without investing in trucks, sales reps, and a large non-brewery staff. Going with Stone Distributing, a brewery can take advantage of Stone’s access to buyers and accounts and get their beer in places they wouldn’t normally be able to access.

It wasn’t until 1999, when Stone had been distributing for about three years, that they decided to leverage their infrastructure and take on some other brands. "We had built our business up and had some conversations with other San Diego beer distributors about taking us on," Steve says, "and we got pretty far down the road. We thought it was a done deal, but it didn’t work out. We were a little bit pissed off, you might say. So we thought, if we’re going to have to continue self-distributing our beer, then we’re going to be a real beer distributor." That decision, of course, meant that instead of joining one of those big distributorships, Stone was going to compete with them directly.

Since they decided to fully commit to expanding the distribution side of their business, SDC has taken on more than 300 employees and their growth has been impressive. "We currently have some really good growth with some of the newer breweries that have been making a big splash," Steve says. That growth is fueled by about 45 different brands carried under the Stone umbrella; they generate sales of about 4.5 million cases a year to more than 12,700 different accounts. SDC’s 40,000-square-mile territory—known in the biz as the Southern California Grocery Region—extends from San Diego’s southern border all the way up past Santa Barbara to Santa Maria and way out east through the desert, including Big Bear, Riverside County, Los Angeles, and the Inland Empire. "It’s kind of unusual for a single distributor to cover a footprint that large," Steve says, but the payoff in leverage and revenue makes it worthwhile. It’s no small business. Steve estimates that Stone Distributing and Stone Brewing are roughly on par with each other, in terms of total annual domestic sales.

It’s taken years for Stone to grow their distribution side to its current size, and each year there’s less room for new additions to the line. It seems the company has reached a sweet spot in size, scope, and infrastructure. Steve says, "In order to take on a new line, we used to look for people who made really good beer. But that’s not enough anymore. For us to be interested now, a brewery has to have a real plan to grow. They have to have good marketing. And they have to have capacity so they can deliver on sales."

The potential—and often the goal—is to get a small brewery to grow pretty large, but growth potential is not the most decisive factor. With 45 brands, SDC has most every beer style and category covered. To add someone new, the proposition needs to be unique and highly convincing. Stone just recently signed Brooklyn Brewery, which is a good example of a brewery that dovetailed with the rest of the portfolio. Brooklyn’s East Coast takes on classic styles offer different flavor profiles from most of the beers already in the lineup. (According to Steve, the chance to work with old friends—brewmaster Steve Hindy and cofounder Garrett Oliver—was also a deciding factor.)

The benefits of distributing beer from a host of companies don’t exclusively go one way; selling an array of other brands also helps Stone. Steve says the company initially liked the idea of taking on their friends and other breweries as a way to help them out. But as the portfolio grew, Stone realized the inclusion of other brands helped to make all of them more attractive. "It also kind of positioned us as the craft beer experts out there, talking to bar owners and liquor stores. It enabled us to make suggestions in any style category and really helped our business overall."

As you may expect, Stone Brewing Co. is the top-selling brand in the SDC lineup. The other bestsellers include AleSmith, Bear Republic, Duvel Moortgat, Modern Times, Pizza Port, Port Brewing, Russian River, and Boochcraft.

Steve thinks there are some cool ways the distribution and brewing businesses cross-pollinate. "Number one, distribution allows us an outlet for new beer we’re excited about. It gives us a chance to trial it with our own distribution in Southern California and see what kind of a response it gets before we make a final decision on releasing it nationally. So that’s always nice." He also points out that using SoCal as a testing ground is especially gratifying for Stone’s local superfans; after all, they get to try stuff that others outside the region may never get to.

The nature of craft beer distribution has changed a great deal over the years, especially since the days when Stone began their own operation. On the simplest level, the explosion of breweries has made the logistics a whole lot more complicated. Add to that all the different styles and special releases produced by each brewery and you have a complicated universe of ever-changing data to manage. Then add all the demands of maintaining trucks, drivers, warehouse personnel, and administration. "It’s hard work," Steve says.

Looking forward, one of the biggest challenges to the distribution business will likely be an inevitable shrinking of the marketplace. "Unfortunately I think there’s going to be a pullback in the number of breweries," says Steve. "We’re already starting to see that with some of the recent closings."

For a company that has the vision and wherewithal to make it happen, self-distribution can offer many benefits. For one thing, when you distribute your own beer, you know the product is being transported and handled properly. (Believe it or not, there are distribution companies out there right now that don’t use refrigerated trucks!) All of Stone’s drivers are Cicerone Certified Beer Servers. "Originally we did it out of necessity," Steve explains,  "but as we were able to grow it and become more successful, it had some obvious advantages to us. It enabled us to avoid starting out as a small fish in a big pond; we were the biggest fish in our house. So we could guarantee that we would get the attention and the real push we felt we deserved. And the bottom line is, it’s really huge to control your own distribution in your own home territory. That’s really benefited us over the years."