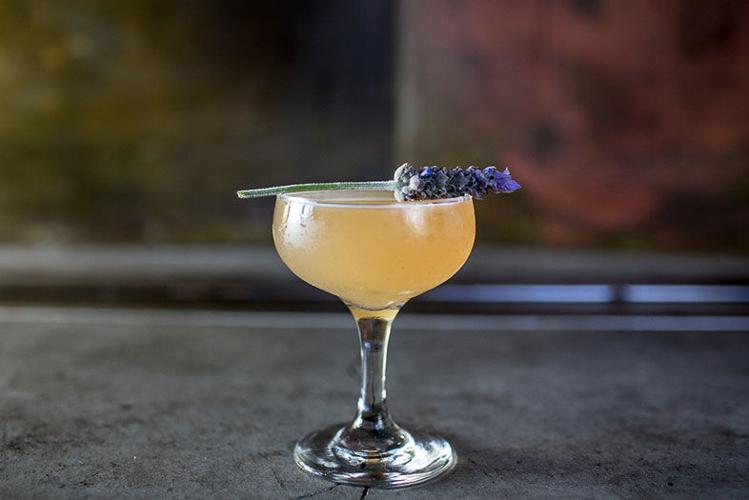 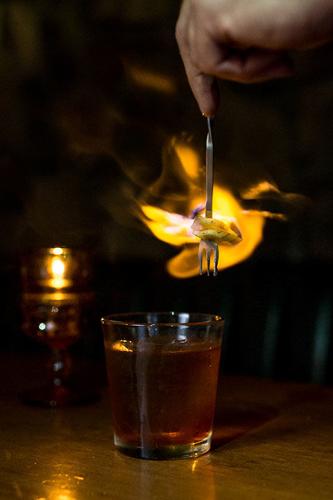 Normal Heights’ Sycamore Den, which just celebrated its fourth anniversary, is one of those cocktail spots that serves consistently impressive drinks. The latest menu doesn’t disappoint. It features eight new cocktails, plus a Sycamore Den classic (the Wolf Ticket) and the Crime of Passion, a favorite from the most recent menu. I talked to Jesse Ross, the Den’s assistant manager, about the new menu and then realized the highlights of our chat fit nearly into a theme….

ABV: With big front windows that open onto Adams Avenue, Sycamore Den’s a great spot for some day drinking. But getting totally sloshed early on ruins good dinner plans. The menu features a couple low-ABV cocktails, like the Stalk Market (see below) and the Hunter Gatherer, which includes Jäegermeister and a spiced-raspberry-infused Cocchi Americano syrup. Low ABV cocktails are starting to show up on more menus, Ross says. "Not every drink needs 4- or 5-ounce pours of rum. It’s starting to be a conversation among bartenders about getting more health conscious."

Aloe: The star of the menu is Aloe Can You Go. Made with tequila, Chareau Aloe liqueur, Liquid Alchemist’s tamarindo syrup, orange curaçao, and lemon, it’s a pretty damn perfect cocktail, and on my list of 2017 favorites. Ross said he’d set out to make something with tequila and tamarind, but couldn’t quite get it to work. Then he added the Chareau and everything came together. Garnished with a sprig of lavender and served in a coupe glass, it’s also mighty pretty to look at.

Averna: The Love Improved, a twist on a Manhattan, features Averna (a bittersweet amaro) that’s been infused with orange peels and cherries. Playing on the bittersweet theme, Ross added chocolate mole bitters and Punt e Mes, a sweet vermouth that leans bitter. The cocktail’s garnished with Averna-soaked cherries. It’s a boozy drink with lots of flavor, meant for sipping. If you dig spirit-forward cocktails, this is your jam.

Bananas: Speaking of spirit-forward riffs on classics, the Banana Bold Fashioned blends tropical with traditional. It’s made with Giffard Banane du Brasil liqueur, overproof rum, and bourbon. Velvet Falernum, a tiki staple, adds some sweetness. The cocktail’s garnished with rum-soaked banana chips that are set aflame before for fun and flavor. "You get this molasses, burnt sugar, rum, banana smoke with your first sip," Ross says.

Celery: Fans of savory cocktails will dig the Stalk Market. It’s made with House Spirits’ Krogstaad Aquavit, fresh celery juice, vodka, and lemon. Taking inspiration from a cocktail by George’s at the Cove’s Stephen Kurpinsky, Ross added some acid phosphate to brighten up the drink and balance everything out. The effect is kind of like a Bloody Mary without the tomato juice. It’s refreshing, vegetal, and slightly savory. It’s the kind of cocktail you might find yourself craving on a warm Sunday afternoon.

Got a suggestion for a future post? Email me.