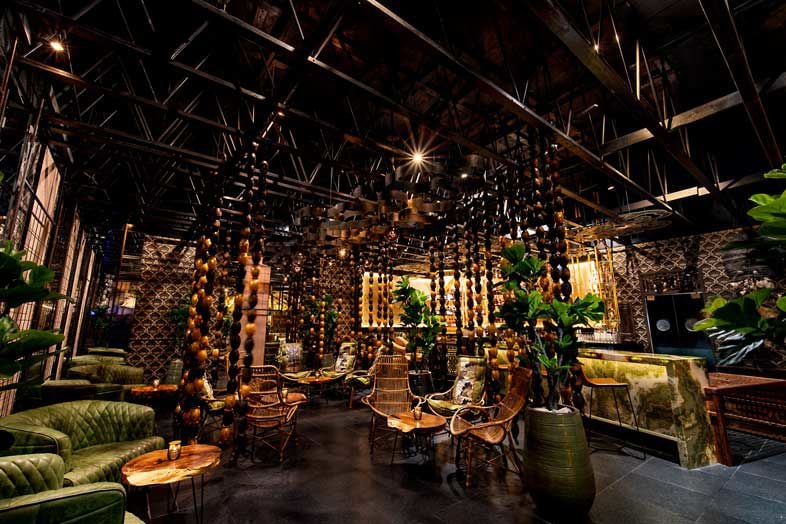 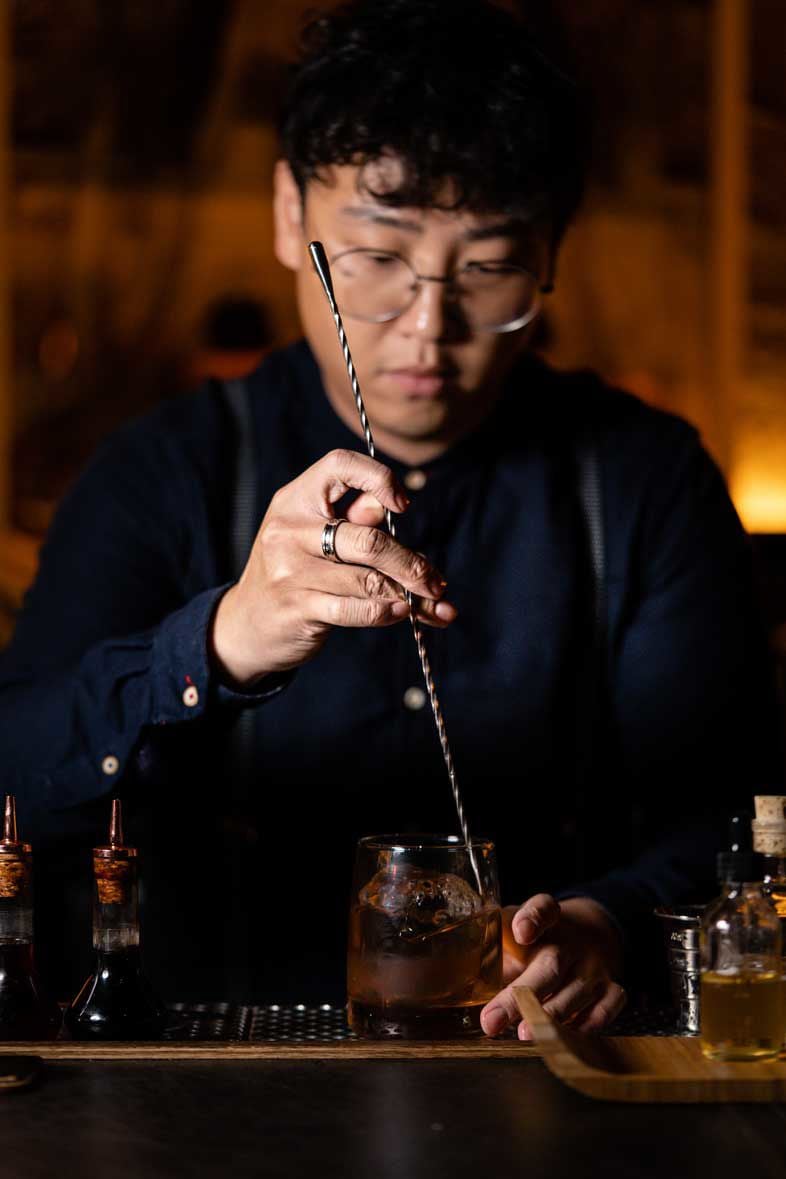 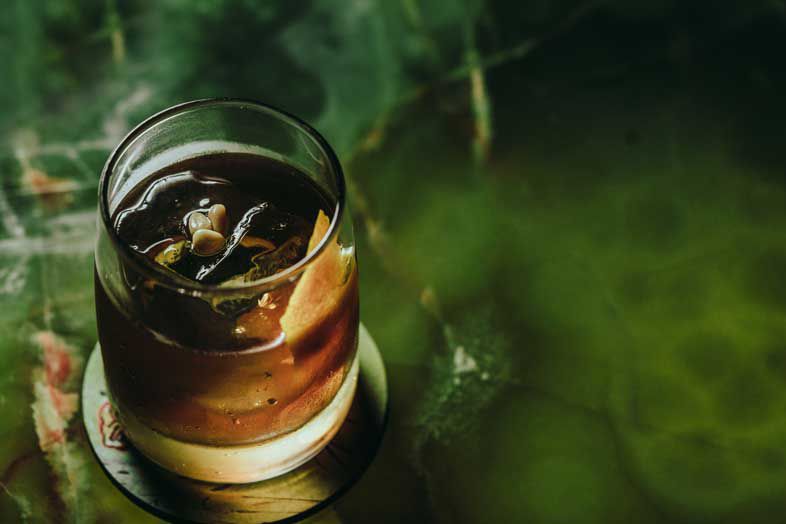 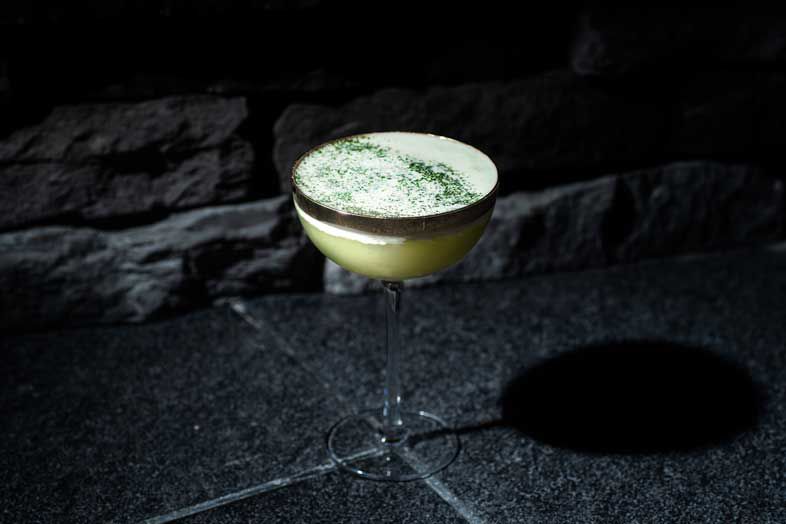 Common Theory co-owner Chris Liang walked me through the new space during its soft opening last week—it officially opens today, December 10. Liang said the time seemed right to expand Common Theory when the space next door, formerly a Thai restaurant, opened up, allowing them to build out their vision for a cocktail bar.

To enter Realm of the 52 Remedies, you step into a bright white space that’s decked out like a modern apothecary. The room’s glass shelves are stacked with bottles and jars filled with the fragrant herbs and spices found in Recipes for 52 Ailments, an ancient text that’s considered the foundation of modern Chinese medicine. The manuscript itself is imprinted on one of the apothecary’s frosted glass doors. Place your hand on a silver symbol on the door’s upper right corner and it opens, leading to a short hallway lined with traditional Chinese prints that have been given a modern makeover. The changing aesthetics—from clean, futuristic apothecary to pop-culture portal—makes entering the bar all the more dramatic. It’s tough to pin down all the influences. It’s part Polynesian, part old Hanoi. It’s something you might see in a classic Hollywood film set in some exotic locale. It’s rustic, with bamboo furniture and carved wood elements, but also elegant with lotus-shaped booths, an resin bar top lit from beneath, flickering lights, and flocked velvet wallpaper. It’s all very, very cool.

Liang says the goal was to give people the feeling of being transported to another place. He says it was fun to watch Soriano’s vision coming together, bit by bit. "Every day it was like, Oh, that’s what Michael meant."

Behind the bar you’ll find Chris Lee. Lee learned his craft at Seoul’s highly regarded Bar Old Fashioned, where there’s no menu. Instead, bartenders chat with customers to assess their mood and taste preferences. Lee says he considers Bar Old Fashioned’s owner his mentor, who taught him that cocktail-making is about precision and detail, and that even the smallest thing can change a drink, like when (and how much) ice is added. It’s a joy to watch Lee work. Each step is intentional and never rushed. If you have the chance, chat with him about the thought process that went into creating the cocktail—it’ll change the way you regard cocktail making. I can only hope 52 Remedies’ popularity will allow Lee the chance to talk to his customers—though I have a feeling he’ll find a way to make the time.

You can’t go wrong with Tears of the Dragon, the bar’s signature cocktail and a riff on an old-fashioned. Lee said he wanted to make use of a traditional Korean cinnamon punch served at holidays, something his grandmother would make. To replicate its flavor, he created a syrup from a sous vide of ginger, dry dates, and cinnamon bark. The base spirit is PX Sherry Cask Finish Bourbon, which Lee chose for its spices, raisins, and nuttiness. It’s garnished with an orange zest and three pine nuts—which usually top a glass of cinnamon punch. The cocktail has a surprising lightness to it and the subtle cinnamon flavor is perfect.

If you’re looking to try something unusual, go with the Jade Empress. Lee’s inspiration for the cocktail was the cheese foam that tops drinks at the wildly popular tea shop Happy Lemon (one opened on Convoy earlier this year). The Jade Empress is made with the classic Chinese spirit baijiu, a little vodka to mellow out the baijiu’s funkiness, green tea syrup, French vanilla, banana liqueur, and lemon, topped with a cream cheese foam. I didn’t get a chance to try one, but a friend who did loved it.

Lee says his goal was to focus on classics, but with interesting ingredients and preparations. Throughout the menu, you’ll find cocktails made with Korean rice syrup, wasabi, shikuwasa (a Japanese fruit, kind of like a tangerine). One cocktail includes "cranberry air"; another has a simple syrup made with dried shiitake mushrooms. Farewell My Concubine includes an Asian pear, oolong tea, and ginger shrub made specially for 52 Remedies by San Diego–based Nostrum.

Lee says he plans to rotate menus every six months, though his ultimate goal is, like Bar Old Fashioned, to have no menu at all. "Talk to us, tell us what you like to drink. That’s an experience I want to create."

Reservations for Realm of the 52 Remedies are highly recommended: 858-256-0441 or 52remedies@commontheorysd.com.