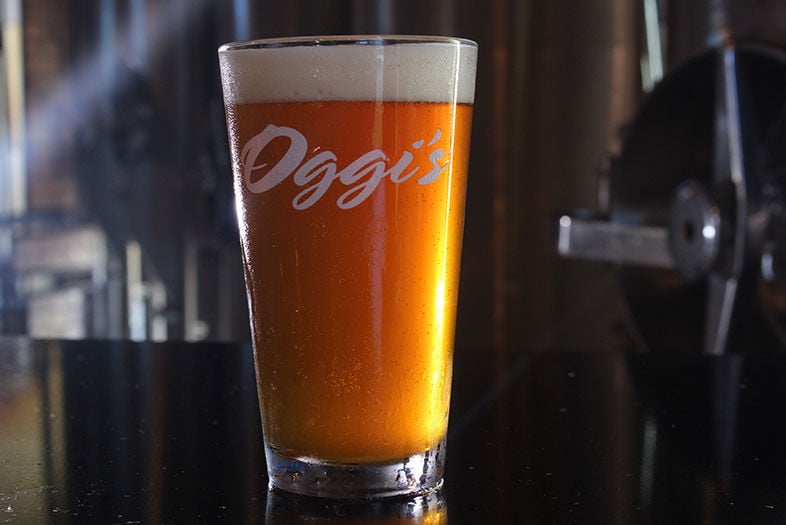 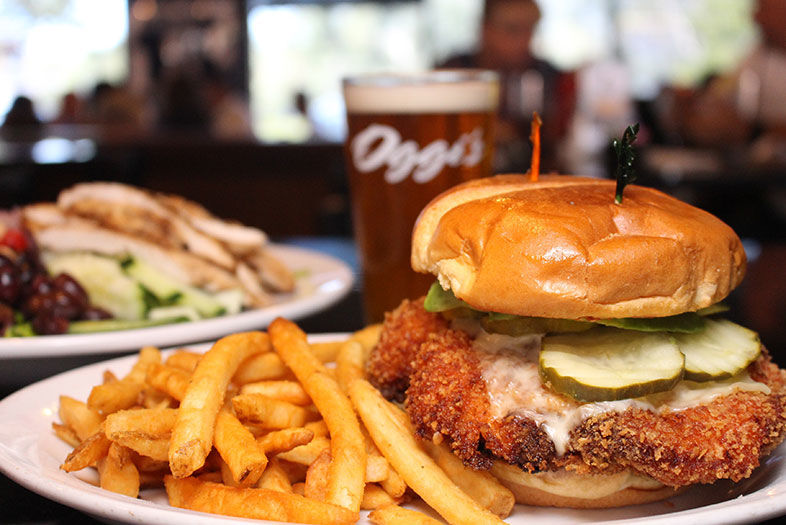 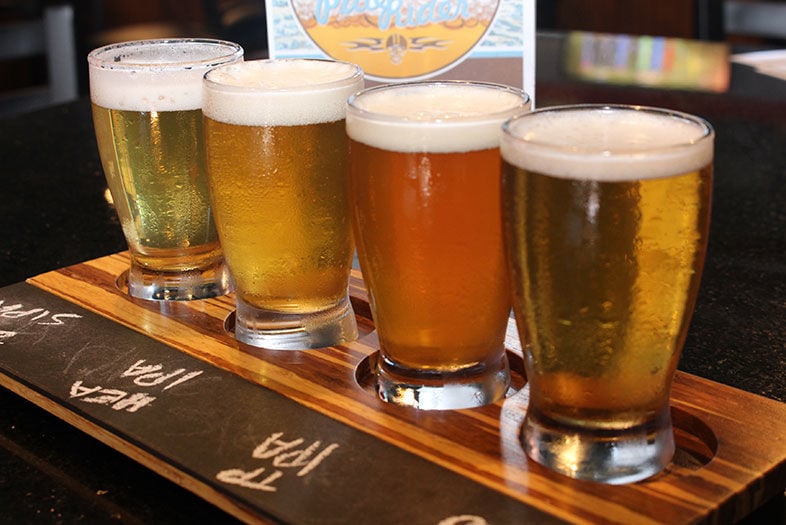 I’ll admit it: I kind of take Oggi’s for granted. They’ve been around so long, they have multiple (independently franchised) locations, and they’ve kind of become part of the landscape. Up until recently, when I considered Oggi’s, I thought about it mainly as a place to eat. But a trip to the Carmel Mountain location—the only Oggi’s that still brews on site—reminded me that this brewpub is as much about the beer as anything else.

With a cold pint of deliciously hopped-up Pale Rider Pale Ale in hand, I sat down with Franchise General Manager Tommy Hadjis and Carmel Mountain Brewmaster Eric Loper to talk about the role Oggi’s has played in the growth of the local beer industry, how they’ve evolved their beer program, and how they strive to innovate and stay relevant while they stay true to the tastes of their loyal and longtime customers.

Let’s talk first about Oggi’s history. Oggi’s has been around in San Diego for long time.

Tommy Hadjis: Yeah. We actually opened as Stuft Pizza in 1991 in Del Mar. My mom, my dad, and my uncle started that restaurant and franchise. And then 1995 was when the first brewhouse went into that Del Mar restaurant. The Oggi’s name came in about 2000. That was a franchise also started by my mom, dad, and uncle. I run Left Coast Brewing Company in San Clemente, which started in 2004 and brews beers for all the Oggi’s as well as under its own label. We love this Oggi’s in Carmel Mountain because it’s the only one that still brews its own beer. I think that adds a lot.

At its height, how many Oggi’s were there in San Diego?

TH: In San Diego I don’t think it ever got over eight. Overall, including outside San Diego, it got up to over twenty.

Each Oggi’s is independently owned, right?

TH: Yes. Each one is franchised.

And Left Coast brews beers for all the Oggi’s, but here in Carmel Mountain, you can also have a bunch of beers you brew on site.

Eric Loper: We have the liberty to brew whatever we want here. So we brew some house beers and some seasonals as well.

TH: And where most Oggi’s will have eight beers from Left Coast on tap, here they probably only have five and the others are brewed by Eric.

How big is this system?

EL: It’s a five-barrel system and I have three 10-barrel fermenters. It’s small.

So, from those early times when Stuft Pizza and Oggi’s were just getting started to now, how have you seen the beer culture change?

TH: It’s changed dramatically. I was young when it first started, and when we first started brewing in 1995, we basically had no idea what we were doing. They just started making beers and people liked them. We eventually hired people whose passion was making beer—guys like Tom Nickel and Jeff Bagby, who both worked for us.

You’ve had some San Diego craft beer luminaries come through the Oggi’s organization.

TH: Yeah. And those guys really helped to frame and define what we ended up becoming. We were experimenting in the late ’90s and brewing beers that people thought were never going to be popular, like double IPAs. People thought we were so crazy to do those. Our IPA, Torrey Pines IPA, has been around for so long, but back then people didn’t like hoppy beers. Many of our customers really thought it wasn’t good, but the brewers that we had really believed in them. They were convinced hoppy beers were eventually going to be big, and they ended up being right.

Was that particularly due to the Bagby/Nickel influence?

TH: Oh, yeah. They had a huge influence on all those beers, as did many other brewers who have been with us over the years. Tom Nickel also helped us open Left Coast in San Clemente. And while Tom was doing that, Bagby was brewing in Vista and that was the year—2004—when we won Champion Brewery of the Year at the World Beer Cup. As far as how beer has changed over the years, the biggest change that I’ve seen is the evolution of the IPA. When we first started making them, they were super malty—in my eyes they were actually better balanced—and now, in Southern California, they’ve shifted and are extremely light bodied, more hop forward, and less on the malty side. It’s all about hop aroma, hop flavor, and less bitterness up front. The whole hazy category has become big because of that.

Eric, have you done a hazy IPA here yet?

EL: No, not yet. I’m definitely not against it, but I haven’t done one yet. I generally don’t filter my IPAs anyway. I like to keep them as they are.

TH: I’m not going to lie: We definitely fought the hazy thing at Left Coast. I didn’t like them at first; I didn’t like the flavor. My head brewer was a real old-school guy who’d been in the industry for more than twenty years and he was just not into it. Finally I decided to stop fighting it and we went ahead and made one. We haven’t stopped making it since! And it flies out the door. Look, we want to evolve. We want to stay current. We’re always trying to come out with new things that the younger craft beer drinkers are looking for. We’ve introduced a new session IPA, for example, and a new-style, light-bodied, hop-forward IPA with lots of Mosaic in it. It’s called Hoppily Ever After and it’s done very well.

As a brewpub, you always have to consider the food on your menu as well. How do you balance being food friendly and catering to your longtime customers with appealing to the younger set and being trendy?

EL: I would say that, having eight of our own different beers, they’re all a little bit different and a few fall into that IPA category. We can still have some of the standard favorites, like the Blonde Ale and the Scottish Ale, which pair really well with just about anything on our menu, but at the same time we can also have some of the cooler hoppy beers on tap.

The McGarvey’s Scottish Ale is an outstanding beer! So, Eric, how do you complement the core beers that are part of the regular Oggi’s lineup with what you brew on your own?

EL: Well, really, I typically brew some of our best sellers, like California Gold and Torrey Pines IPA, but I’ll brew my own hefeweizen. Our customers like a particular German-style hef called Sweet Spot, so that’s what I brew for them here. We also have 17 taps, so we can have guest beers on that our customers ask for. Right now we have Fall Brewing and Pizza Port, as well as a bunch of other beers. That leaves me to brew other stuff that I think the customers might want, like the Pale Rider Pale Ale I just did. I’ll also do a Christmas beer, and other special brews and seasonals throughout the year.

Is there anything you haven’t brewed yet that you’re dying to brew?

EL: There’s all kinds of stuff I’d love to brew, but I’ve realized through the years that I don’t brew for me, I brew for our customers. So, I’ll experiment and have fun—I used to brew a trippel, for example, which is one of my favorite beers that I make—and it sold really well for a few years, but then it just started dying off. It didn’t make sense to continue brewing it just because I and a few other customers love it! I can’t drink it all by myself!

TH: We have to accept what our customers want. There’s no way around it. You can’t fight it. Despite that, though, our beers are always going to continue to evolve. We want to continue to introduce new styles and not get stuck doing the same things forever. So, we’ll innovate and introduce new things, but in the end, we’ll still always say, "Let’s brew them what they want!"