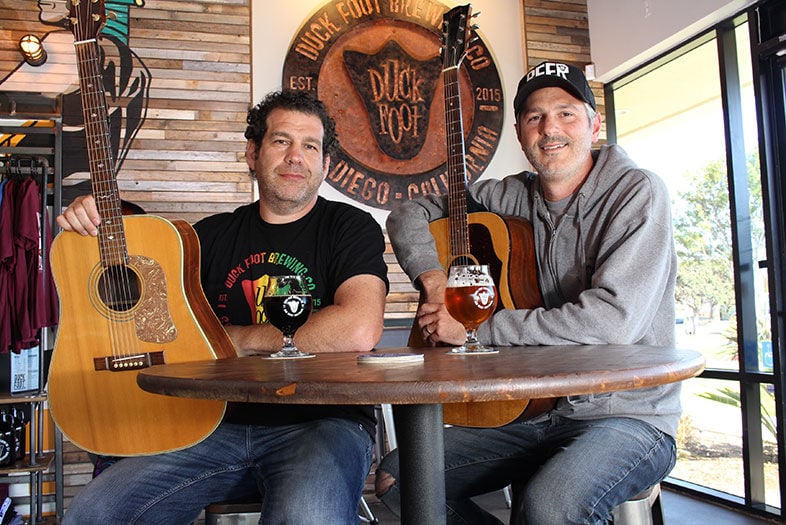 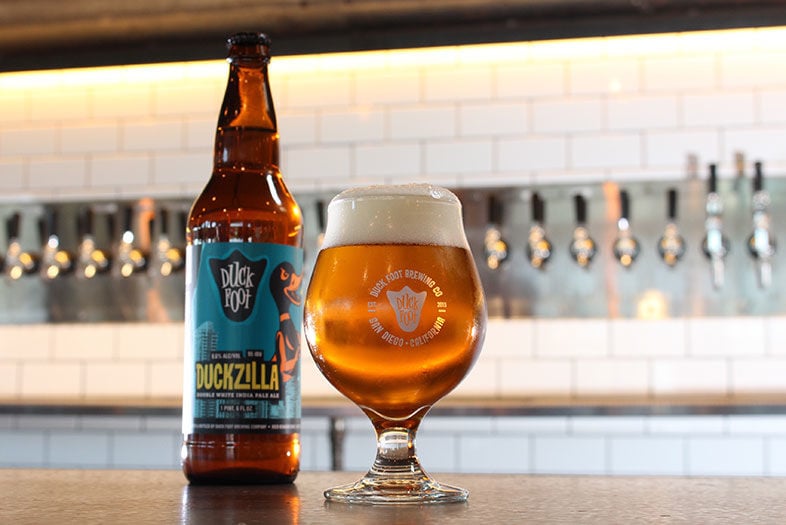 When they first opened nearly two years ago, the folks at Duck Foot knew that being San Diego’s first gluten-free brewery would likely get people’s attention, but they also knew that attention wouldn’t last forever. In order to have any real chance of success, Duck Foot also had to make straight-up good beer—gluten-free or not. Brew buddies Brett Goldstock and Matt Del Vecchio co-founded Duck Foot partially as a way to make beer that Matt (who has Celiac disease) could drink. Today, Matt and Brett are really proud of the fact that—on any given day in the tasting room—the vast majority of their patrons don’t have any particular dietary restrictions at all, they’re just there because they like the beer.

With a cold pint of Hopping the Wall—a delicious hoppy pale collab they did with Tijuana brewery Cerveceria Lúdica —I sat down with Brett (CFO; Chief Fermentation Officer) and Matt (Head Quack) to talk about the evolution of their business, what it’s like being in the center of "Beeramar," and why they love doing R&D.

So, a bunch of guys in town are doing some gluten-free beers now, but you’re still the only totally gluten-free brewery in town, right?

Matt: Well, a bunch of other breweries are doing gluten-free beers.

A bunch are using Clarity Ferm and say those beers are "gluten-reduced" but they’re not saying "gluten-free."

Matt: Well, that’s an interesting point. A bunch of other brewers are using the same process we do, and on our labels, we have to use the term "gluten-reduced," that’s the legal terminology. The term "gluten-free" gets used in conversation, and a lot of our customers who are Celiac refer to us as "gluten free" because they know we have safe levels of gluten. One thing I will say is that, of all the breweries out there who are doing it, we probably have the best quality standards for testing levels. I’ve had other breweries say to me, "Oh, yeah, we’re doing what you’re doing," and I’ll say, "Oh, really? What’s your quality control? How do you test?" And their answer will be, "You mean, you test?" We’ve actually been talking about that.

Brett: We’ve been talking about how to differentiate ourselves in that area. So far, we have not heard about anyone who is testing the way we are.

Matt: I’ve also always wanted people to judge us based upon the quality of our beer, and not because of the gluten-reduced or the gluten-free aspect. So I guess if more breweries actually do use Clarity Ferm, then we are back to competing on just a beer-to-beer level. But we are probably the one brewery in town that has the best understanding of what it takes to make these beers safe, and why it’s important to make it safe. Other breweries may do it because it’s a fad or they might pick up market share; we do it because I’m like the poster child for the beer-drinking Celiac community.

Unlike other folks in town who may use the gluten-reduced aspect to help market themselves, I feel like your identity from the beginning has been primarily as a gluten-free brewery.

Brett: But we don’t actually try very hard to market ourselves like that. Our marketing definitely leans more toward mainstream brewery.

Matt: Especially since we’ve started selling to restaurants and bars—we’ve had about 500 locations buy from us—and they go from San Diego county all the way up to Burbank. And our bottles are in BevMo! all the way up through Orange County. We’re also in Whole Foods, which is our demographic, and we just got into Von’s and Albertson’s. What’s cool about that was that getting in there was based on zero relationships; we just sent them a cover letter and our beer and they chose us. It’s not like we hired some silver-tongued salesperson to get us in!

You’re coming up on your two-year anniversary. What are the most important things you think you’ve learned in the last two years?

Brett: Well, time is precious and there’s not enough of it.

Does this whole running a brewery thing take a lot more time than you thought it would, or were you prepared for it?

Brett: I was not prepared for it. We dove right into it, we were fully committed, but it’s definitely been a bigger commitment than we thought. I think back two years—I was still working at Qualcomm while we were doing the build out—and my thought process was that I’ll keep working at Qualcomm and I’ll do this on the side. Now I think, "What was I thinking?! That’s crazy!"

Matt: Well, I’d say we’ve learned a couple of things. We don’t have this down yet, but one of the big things we’ve learned is about communication and dialogue between what happens in the back in our brewhouse, what happens with our sales people, and what happens in the tasting room. We’re continually trying to make sure that we’re all interacting as a team and not as isolated pockets. Up until now, I’ve always worked with just me and maybe one assistant, it was never such a big team to lead. But we’re up to eighteen employees now, so it’s a pretty big team. And we’re figuring out how to get everybody on the same page on a regular basis. I would say that’s one of the biggest things I’ve learned that I didn’t anticipate. Opening up a brewery, you focus on the recipes and the cost of the build out, but once you're open, you realize how important the other stuff is.

Two years ago, when you guys opened, there were certainly a bunch of other breweries in Miramar, but there weren’t nearly as many as there are today. How has it been seeing all that growth in your neighborhood?

Matt: Well, we actually had a little bit of a hand in it. H.G. Fenton started the Brewery Igniter project, and they’re our landlord. So, what was interesting about it is we spent a year and half looking for the right location—we looked all over the place; Brett and I and our real estate agent, we probably wanted to fire each other about twenty times because of how hard it was to find this place—and H.G. Fenton was super cool. They were like, "Oh, a brewery property? Let’s talk!" So they were acutely aware of the success of having a brewery in the portfolio. So, after we got open we get this phone call from our landlord and we start getting these weird questions about what kind of chemicals we were using and things like that. Finally they divulged that they were starting this Brewery Igniter program and they asked if it was alright if they opened up two small breweries on the other side of the business complex. Instead of being upset about it, we decided to take the high road with it, because they were so cool to us in allowing us to get open. So we offered to help—we realized they’re not brewers, they’re landlords—and we gave them the names of our architect, the construction manager and firm, and I gave them my contact list. That was the team that needed to do it.

Brett: And that’s exactly who they used!

Matt: And look at it now. There’s two awesome breweries next door, and they’re having great success, and so we feel a little bit part of that.

And that brings me around to the question of do you feel all the growth in Miramar has ultimately been a positive thing for you?

Brett: Yes. My longtime position on this is that we’re still much less densely breweried than a bunch of other cities, and we’ve also got kind of a built-in educated consumer base, so I don’t feel it’s time to panic. And the positive side is that it’s bringing people to us. We kind of joked when we opened that we were Ballast Point overflow parking, and it’s more true than you might think. We have a great relationship with them, we refer people to them and they refer people to us, and I love the collaboration. I see no sign of that letting up.

Matt: Ballast just kicked us a bunch of their barrels.

Brett: Yeah, we just love them. And we see Orange County and L.A. people in here all the time and they’re here because this is a beer destination.

Matt: They can visit, like, ten different breweries in one square mile!

Looking forward now, what’s left for Duck Foot to do in the coming years?

Brett: Also sour beers. That’s always been an area that’s been of interest. And barrel aging; with those barrels we got from Ballast Point.

Matt: We actually had a bunch of barrels before, but a bacteria infection damaged a lot of our beer this year. That was really a learning experience, and it sucked because it was like on month six.

Wow, how did that happen to do you think? You had obviously tasted it before month six…

Matt: Yup. Month one, month two, month three, month four…month five it was almost there, and then month six: boom. Every barrel.

So how does something like that take six months to show up?

Matt: I don’t think it was there the whole time. I think it was clean, clean, clean, and then got fruit flies or something. We had White Labs come in and work with us on our QC, and we talked to a bunch of other breweries that have barrel aging programs and they were like, "Yeah. That happens." We were really bummed because we were at the finish line. We had ordered the bottles and the labels—the whole thing. So, we’ll re-do it. People dig the sours. And we dig the sours. And that’s really why we opened in the first place. To do the fun creative stuff.

Brett: Yeah. Beer-wise, our small-batch program has really taken off. We’ve got some very creative brewers who are really putting their hearts into some of these cool small-batch beers we’ve been doing.

Matt: And that’s the way we run. The left hand side of our menu is our core beers and the right hand side is our seasonals and small-batch stuff. We consider a seasonal a 15-barrel batch, but then we have the 1-barrel fermenters that we used way back when we were in my garage in Leucadia. We still have them in operation. So, what we’ll do is we’ll take whatever beer we’re brewing and we’ll send beer into those fermenters and we’ll add spices and fruit ingredients...

Brett: And we’ll also do some blending with that, which has been fun.

Matt: So, that’s on the right side of the menu.

And a lot of that stuff is driven by your brewers?

Brett: Yeah. It was us to begin with, but we’ve unleashed them. It’s really cool because we find that, when you take a step back, people’s creative juices really get flowing. And, like Matt said, that’s what we’re all about.