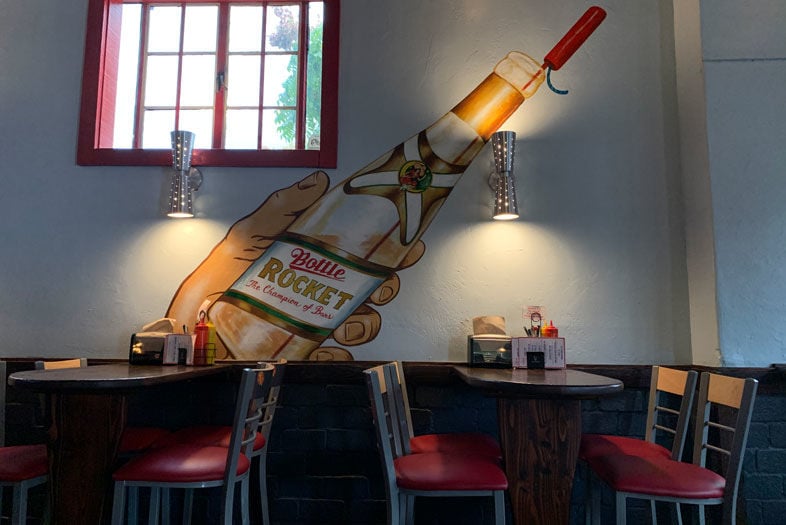 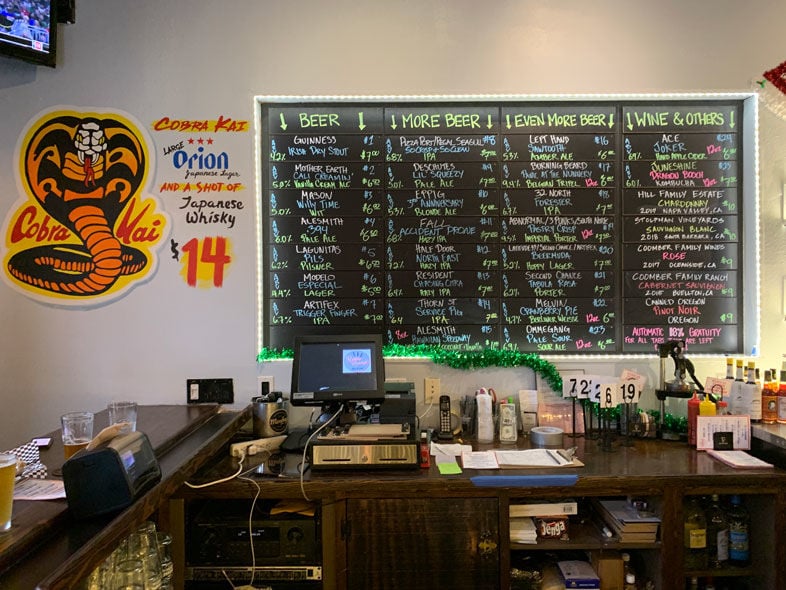 Beer writers in San Diego are a small, but relatively tight-knit fraternity. (This is true in both the communal sense as well as the beer-swigging inebriative sense.) When I need a drinking buddy to check out a new spot, I can usually count on one of them to both accompany and humor me while I take notes and demand sips of everything.

Today, the particular venue is Bottle Rocket Bar & Grill, a newly opened beer bar in the East Village at 805 16th Street. My comrade in craft: Ian Anderson, beer writer for the San Diego Reader. (Thanks for not writing about our visit before I did, bud!)

Despite finding out the hard way that Bottle Rocket is not dog-friendly, before long we were situated at the end of the long bar in front of the extensive beer list. It’s a familiar feeling for both of us; the space previously housed Monkey Paw Pub and Brewery, one of San Diego’s best brewpub dives that put down roots before the mass of luxury apartment buildings really took hold of the neighborhood. Monkey Paw’s demise didn’t lack drama: local brewery Coronado Brewing Company purchased a majority share of the brewpub in 2017 before shuttering it less than a year later after the original owner sued Coronado, citing breach of contract.

But the ghosts of brewpubs past don’t seem to haunt Bottle Rocket’s new ownership, who are also affiliated with local watering holes The Regal Beagle, The Regal Seagull, and Sidecar. The soft opening is still a bit rough around the edges—there isn’t a website and they didn’t post the official hours of operation until after my visit. The beertender was also unsure about the happy hour specials, recommending that I follow their Instagram for more information as they fine-tune operations.

All that is forgivable in the early stages of any business, and the draught list goes a long way in easing said growing pains. Twenty-five taps flow with serious craft cachet and plenty of local favorites, including offerings from Eppig Brewing, Burning Beard Brewing Company, Half Door Brewing Company, Resident Brewing Company, and even hard kombucha from JuneShine. Tap diversity is slightly less than stellar; hazy IPAs dominated the board by a long shot. Still, it’s hard to criticize that decision too harshly. Give the people what they want, and there’s no denying hazies are it.

Ian opted for the Impossible cheesesteak and Latitude 33/Second Chance/Artifex hoppy lager collaboration, while I went for the spicy chicken sandwich and Pizza Port/Regal Seagull collaboration IPA. Beer writers make the perfect drinking buddies because they love to share—going halfsies on everything was more reflex than request. My biggest gripe was a slight overabundance of mayonnaise on the sandwich and underwhelming spice level, but beer-wise, there’s nothing to gripe about. Bottle Rocket’s taps are plentiful, the draught lines are clean, and the service is knowledgeable and speedy.

Parking is a little hairy in this part of town, but it’s hardly a dealbreaker. This isn’t really a place for dogs or kids, and that’s totally cool too. Just make sure to bring a pal who’s down to go halfsies with you, and you’ll be all set for takeoff.