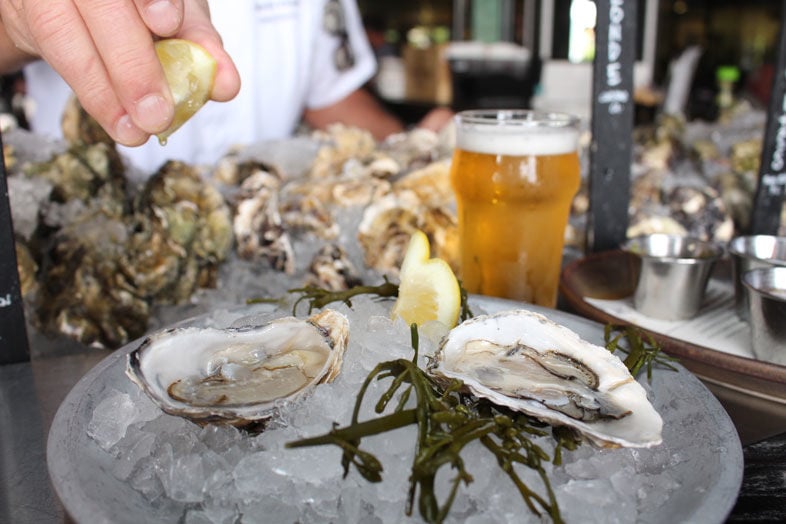 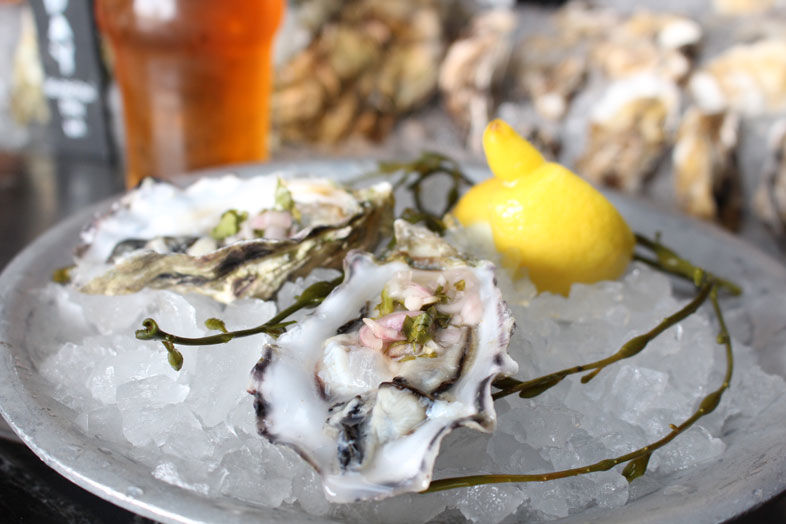 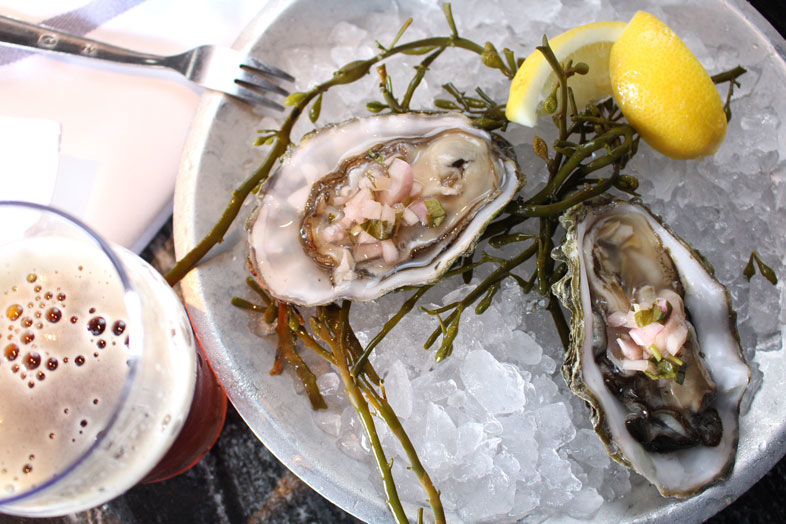 I showed up at King’s Fish House in Carlsbad fairly confident of what I was about to experience. I was there to do an oyster and beer pairing session with Executive Chef Fabrice Poigin, where I fully expected every oyster to pair easily with every beer. What I soon found out, however, was that oysters are much more varied and unique from one another than I had realized. And that meant not all beers pair perfectly with all oysters.

Now, I’m not saying that pairing oysters and beer is difficult. It’s not. I’m not even saying that you couldn’t blindly pair any beer with any oyster and be perfectly content. You could—probably. What I am saying is that creating the perfect pairing requires a little more thought and knowledge (about both the oyster and the beer) than you may have previously assumed.

The first thing I realized while sampling a wide variety of oysters was not only how different they were from each other in size, texture, brininess, and flavor, but also how subtle and delicate many of the flavors actually are. Depending on the variety, for example, you’ll often get subtle flavors of melon, cucumber, citrus, and freshly cut grass. Texture, too, will range from buttery and creamy to plump and meaty. Pairing some of these varieties with a beer that doesn’t allow the full array of flavors and textures to shine would, in effect, dampen your oyster experience.

The second major thing I learned sitting at the impressive fresh oyster bar at King’s was how many different oyster-farming techniques there are and how each technique creates specific characteristics in the oysters. There are, for example, beach-grown oysters, suspended tray oysters, floating cage oysters, suspended cage oysters, bottom cage oysters, rack & bag raised oysters, and, of course, wild oysters. Each of these farming methods greatly affects size, texture, and flavor, among other things. Water temperature and time of year (whether the oysters are spawning or not, for example) also significantly affect flavor and texture.

In general terms, the closer to wild conditions that an oyster experiences, the stronger and more contoured its shell will be, the larger it will grow, and the chewier and meatier it will be. Wave and tidal action causes more constant agitation, which in turn creates a larger and more contoured shell, as well as a larger oyster inside. For these same reasons, open water oysters tend to be larger and meatier than bay oysters. The "off-bottom" techniques, such as suspended cages or trays, protect the oysters more and keep them away from the turbulent action on the ocean floor. This environment, in turn, often creates a smoother (often more brittle) shell, a creamier meat, and an overall smaller oyster.

Chef Poigin treated me to a tantalizing variety of oysters during my visit. On the menu were Carlsbad Blondes (raised locally in suspended trays, they had creamy meat with subtle flavors of white wine and melon); Pacific Kiss (beach grown in British Columbia, they had sweet, delicate meat with a green lettuce finish); Moo Moo Island (wild raised in Mecox Bay, New York, these had a slightly sweet brine and a nutty flavor); Island Creek (ocean bottom cage started and finished on bay bottom, these medium-sized oysters were buttery, briny, and subtly sweet); Night Tides (beach grown on tide flats in Thorndyke Bay, Washington, these were minerally and a bit earthy); and Henderson Bay (beach grown in Henderson Bay, Washington, these large and highly contoured oysters were plump and chewy, with notes of asparagus and cucumber on the finish).

Now, there are too many oyster varieties—and too many different beers from different breweries—to provide the perfect beer pairing for each oyster, so here are some basic guidelines to follow:

Smaller oysters (often with smoother shells) will have more delicate and subtle flavors. These varieties will pair best with less intense beers, such as pilsners, blondes, Mexican lagers, and light Belgian styles. [Truth is, the lighter Belgians will work wonders with almost any oyster.] At King’s, the Pacific Kiss oysters were great with Respeto Mexican Lager from Mason Ale Works and the Carlsbad Blondes were awesome with Harlot Belgian-Style ale from Societe. Also perfect with Harlot: the Island Creeks, which were buttery and creamy and benefited greatly from the crisp, clean acidity in the beer.

The larger oysters, which tend to be meatier and more intensely briny, will stand up to beers with a little more body, such as IPAs or even reds and ambers. The Moo Moo Islands, which were wild grown, were meaty, minerally, and nutty, which stood up well to bright hops and silky mouthfeel of Orderville Hazy IPA from Modern Times. The Henderson Bays, big gnarly oysters raised on the beach, had an earthiness and vegetal quality that melded well with the caramel malt notes and light roastiness of Coronado’s Mermaid Red.

Topping your oysters with various condiments, such as mignonettes, relishes, cocktail sauce, and horseradish will alter the flavors you will be pairing. In most cases, I found that a simple squeeze of fresh lemon or a bit of horseradish is the most satisfying garnish, and the least intrusive. If you’re topping an oyster with a spicy relish, or a strongly flavored sauce, you might want to increase the weight and boldness of the beer you pair.

As a general rule, I would steer clear of pairing oysters with fruited beers, coffee beers, and other beers that feature adjuncts. I would also keep the hop levels of the beers you choose at the low to medium level; big aggressive double IPAs are simply going to overpower the seafood flavors you’re trying to taste. When in doubt, just remember that a clean, crisp, fresh, and straightforward beer will always be a great companion for an oyster.

Whatever you wind up drinking with your oysters, I hope you discover the beautiful subtlety, complexity, and variety of these creatures. A plate of fresh oysters and a cold, delicious beer are most definitely a culinary pleasure not to missed.