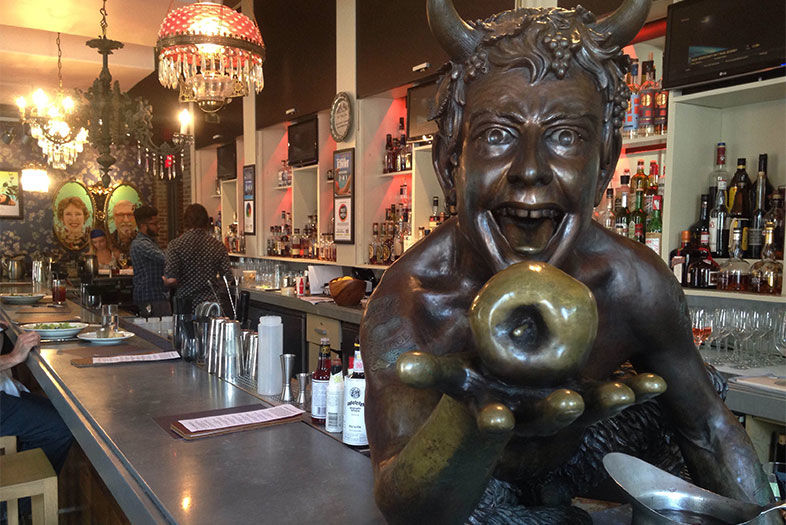 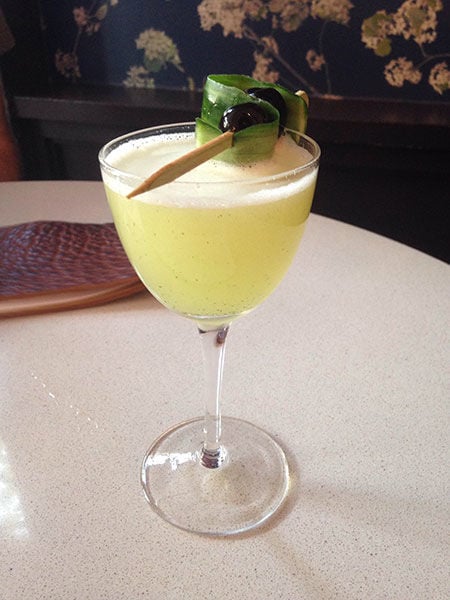 Though the title of this column is SD Sips, this week, we’re going to Louisville, Kentucky, y’all.

The point of my trip was to spend time with family, not drink booze, But, how can you go to the bourbon capital of the world* and not have a cocktail or two? Here’s a quick rundown of the cocktail portion of my visit:

There are a number of great cocktail bars in Louisville—and I was able to get to two (like I said, family before liquor). But, they were the two at the top of my list. The first was Proof on Main at the 21c Hotel. I would have gone to 21c regardless—it’s part hotel, part contemporary art museum and it’s stunning. They have five rooms of gallery space that’s open to the public and more art in unexpected places (lobby bathrooms, random basement hallways). At the Proof Bar, presided over by a bronze demon-faun, I ordered the Smoke Rings, made with Old Forester Signature bourbon, orange curaçao, Ramazotti (an orange-flavored amaro), lapsang souchong tea (which lends a subtle smokey flavor), and absinthe. It was a reminder that orange is bourbon’s perfect pairing and I liked how the smokey tea flavor lurked just below the surface.

Rebecca Votel, who bartends at Kindred in South Park, recommended the Silver Dollar, where she worked before moving to San Diego. Located in an old firehouse, it’s consistently on lists of best bourbon bars in the U.S. (It’s also just down the street from the excellent Guestroom Records, where the staff remembered Rebecca and told me to tell her hello.) I love bitter cocktails—I’ll take a nice Bitter Giuseppe any day—and the Bitter Betty (Buffalo Trace, Cynar, Cardamaro, and a housemade cocoa-nib tincture) was perfect. It’s one of those cocktails that starts out strong, but tastes just as great with a little ice-melt.

The proper way to taste bourbon:

With wine, you’re told to smell the wine before you drink it. Not so with bourbon, apparently. If you’re doing a bourbon tasting, first bring the glass upright to your mouth, put your lips to the edge and suck the air off the top to clear the glass of harsh alcohol vapors. At least that’s what Bill, the guy behind the bar at Taste Fine Wines and Bourbons, told us. It was a place we sort of stumbled into late one afternoon while walking around NuLu (Louisville’s warehouse district). We were the only ones at the bar and ended up chatting with Bill about Japanese whiskey, whether the decanter in Don Draper’s office was actually a bottle of I.W. Harper, and the mystery of Black Saddle, a bourbon that’s distilled in Kentucky but bottled in Fairfield, California. Tastings here are $6 each, regardless of the bourbon—there are more than 20 available to try. If you purchase a bottle of anything in the store—wine included—you get a free tasting. We came away with a bottle of the easy-drinking Blade and Bow. The bottle prices are a little higher than other shops, but being able to try before you buy makes it worth it.

What Louisville has that San Diego needs:

Independent liquor stores. San Diego has a few—Old Town Liquor and Keg N’ Bottle, plus the downtown location of Krisp has a good selection. But it would be nice to have some local spots that highlight local products rather than blend them in with everything else (or not carry them at all). When I’m in Louisville, I always hit up Old Town Wine & Spirits on Bardstown Road for their huge bourbon selection. Now I’m adding the Wine Rack on Frankfort Avenue to the list. Both have bourbons you won’t find elsewhere, plenty of other Kentucky-made spirits and, especially Old Town, a selection of spirits and liqueurs that rival BevMo.

* Actually, Bardstown, Kentucky, which is about a 40 minute drive from Louisville, and the home of a number of distilleries (Barton, Willett, Heaven Hill), has trademarked itself as the "Bourbon Capital of the World."

Got suggestions for a future post? Write to 2kellydavis@gmail.com.