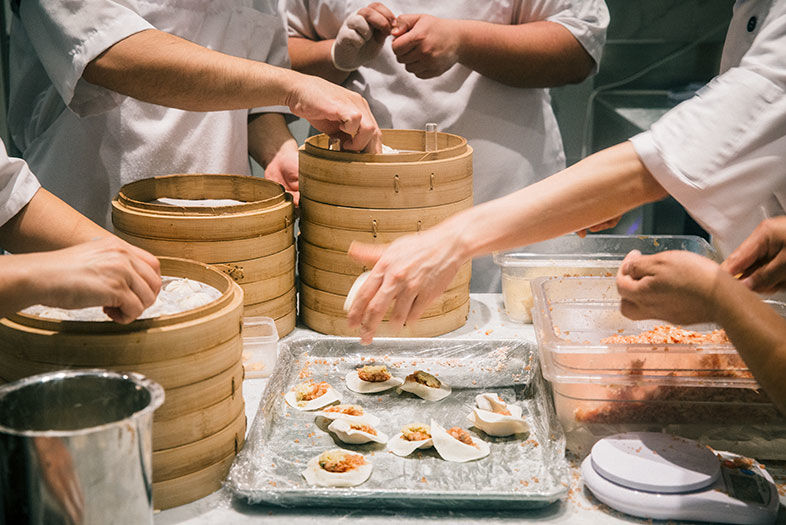 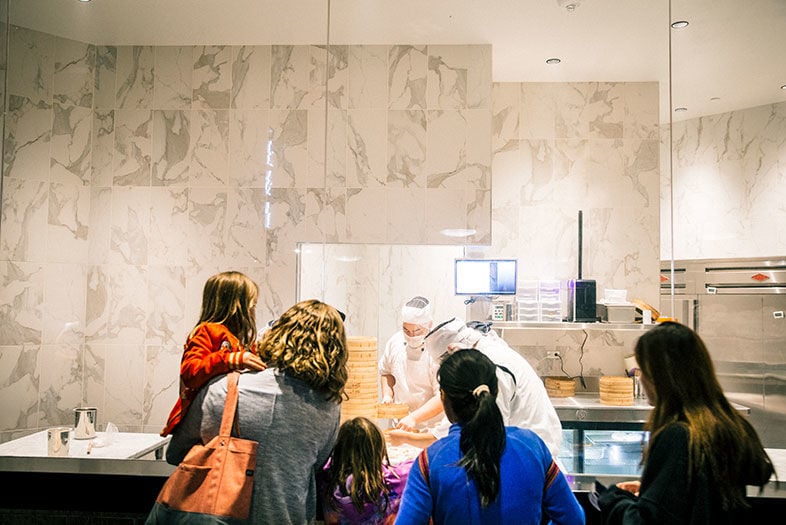 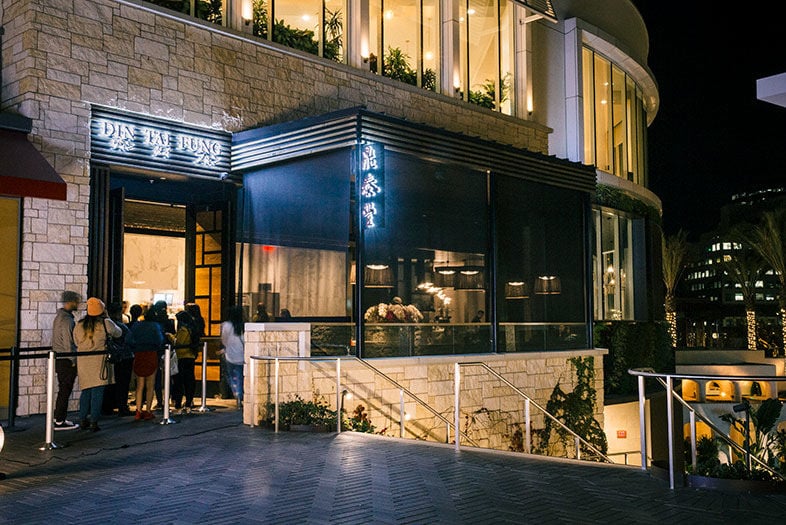 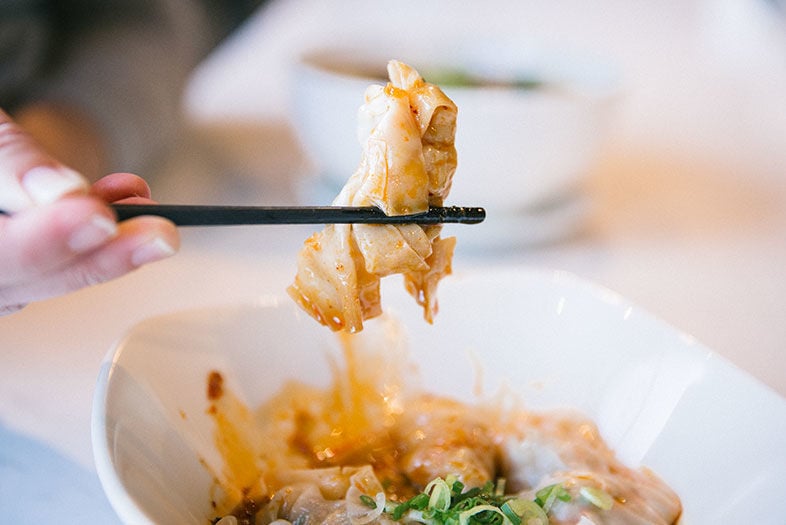 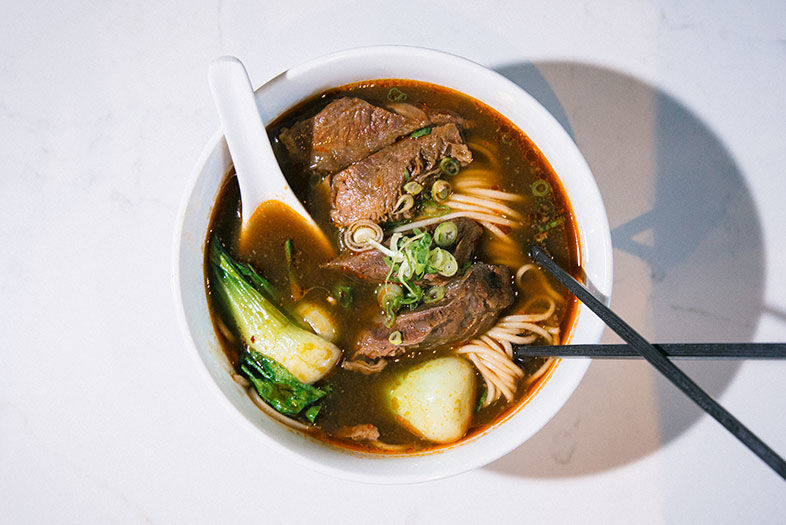 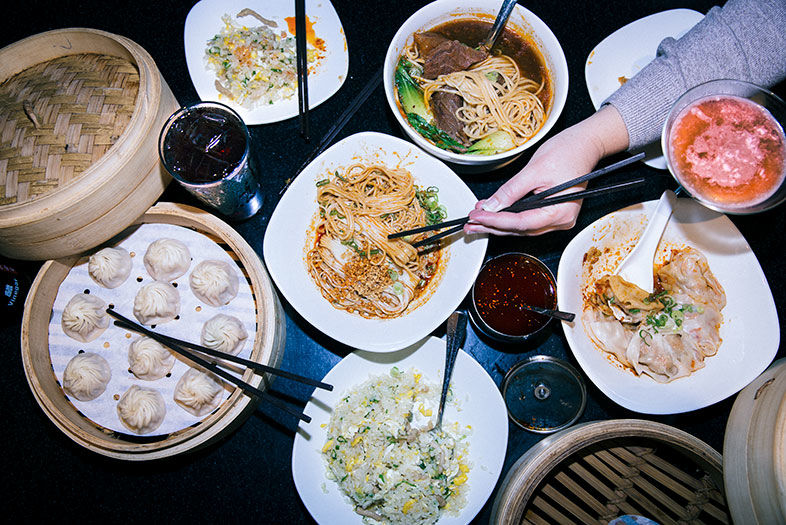 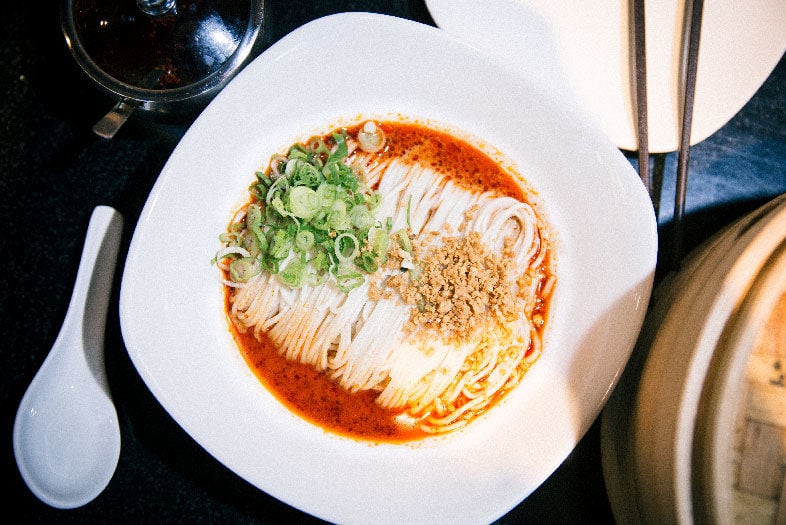 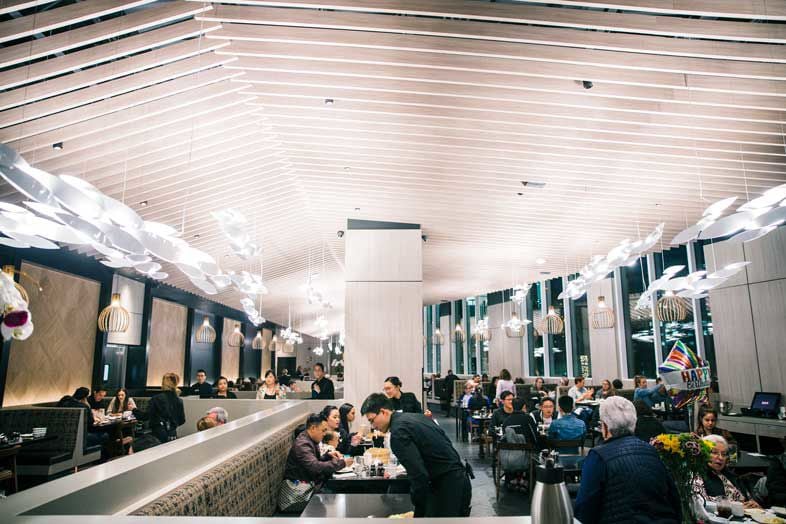 Not sure if what they’re meticulously fiddling with is a dumpling or a radioactive molecule. In the waiting lobby of Din Tai Fung, six of the cooks are on display behind pane glass, like expensive jewelry or zoo bears. Guests huddle around the enclosure, hungry and ogling and furiously snapping for the Insta. In white coats, white hairnets, white ball caps, and white surgical masks, the cooks pull, snip, measure, weigh, flatten, fill, and pleat their legendary little food. A man stretches a denture-white string of dough, snips off a section onto the digital scale. It looks like gnocchi and weighs exactly—well, something specific, a weight codified at Din Tai Fung (DTF) headquarters in Taipei as the perfect weight for a Shanghai-style soup dumpling, or xiao long bao (XLB).

A cook grabs each nub, flattens it with a thin wooden roller, then flips the doughy disc acrobatically, Harlem Globetrotters–style, to another cook at the immaculate dough table. That cook weighs out a mix of minced, seasoned pork and room-temp cubes of soup and places it in the center of the disc. Each XLB gets 21 grams of filling (within a 0.4 gram margin of error), as mandated by DTF HQ. Finally, a cook pulls the edges of the dumpling up in a series of 18 pleats—always 18, because perfection, and also because saying "one" and "eight" in Mandarin sounds like "to get rich."

The finished dumplings, looking like an ornate meringue or swirled dollop of vanilla soft-serve, are placed in a bamboo vessel, and steamed at an exact temperature for an exact amount of time. This is how you do XLB when you have over 130 locations worldwide, reportedly selling over 10 million dumplings a day. That number is downright McDonaldsian.

At your table, a server lifts the top of the bamboo vessel and steam rises to reveal six piping-hot XLB. Rock stars in the ’80s made similar entrances. You grab chopsticks, lift a dumpling from its basket, and gently place it in a soup spoon. Eat it right away, and the only condiment you’ll need is bacitracin to salve the scorched ruins of your mouth. Pierce the top with your chopsticks, or bite off the top, to release the steam and let it cool. The spoon will catch any of the sacred soup that might escape. Slurp a little, drizzle it with black vinegar (the classic XLB accompaniment, an aged vinegar made with charred rice, like a less-sweet balsamic), and pop it down.

The dumpling has a slippery-silk texture so sensual it’s nearly indecent. The soup is that warm broth that grandmas claim cures everything, from the common cold to prolonged unmarriedness. The pork is a loosely formed meatball, a porcine nugget of real sustenance.

That’s the XLB experience. And DTF has ridden these petite Shanghai specialties to global success. Founder Yang Bingyi was born in Shanghai, but during the Chinese Civil War fled to Taipei, Taiwan, opening a cooking oil shop in 1958. He served xiao long bao, but just as a sideshow. Fortuitously, his gourmet oil business took a nosedive when stores started selling it in cans. So in 1972, Yang ditched oils and made xiao long bao the sole focus of Din Tai Fung. He enjoyed good success until 1993, when the New York Times named it one of the top 10 restaurants in the world.

An NYT nod like that, especially in the ’90s, was rocket fuel. Yang capitalized on the exposure, expanding to Japan and China. In 2009, the DTF outpost in Hong Kong was awarded one Michelin star (the first Taiwanese restaurant to receive the honor). Michelin stars may not have the cosmic thrust they once did, but it’s rare for the tire company to constellate a chain restaurant. A case study of DTF’s business success is taught at Harvard.

So, obviously, there’s something special about DTF. And after two marathon meals at their new, 10,000-square-foot location at Westfield UTC, I can attest to something special. It’s just not the xiao long bao.

I’d spent the week prior scouring the city for the best XLB. DTF’s were my third, maybe fourth favorite. They’re fine, fine. Their dough was far superior, membrane thin but sturdy enough to contain the soup without breaking. It didn’t taste of flour, either, which happens to lesser XLB that are undercooked.

The problem with DTF’s soup dumplings is that tradition is both the buoy and the anchor. The trick is retaining the part that keeps you afloat (that dough), and ditching the part that holds you down (DTF’s broth). Traditionally, XLB have a pretty simple, light broth, with hints of pork, chives, and ginger. But we’re living in the golden age of broths, where chefs are roasting bones, blooming spices and seeds, reducing the liquid to its most intense, primal essence. What for centuries was a faint soup is now a deeply flavorful, soul-restorative meal. DTF’s broth is far too shy in this brave new modern broth world.

There’s also simply not enough of it. Each had a scant thimble. The name "soup dumplings" requires more soup.

It’s a shame, because DTF isn’t afraid to ghost tradition in the name of flavor. They sell an XLB with black truffle, which gives purists all sorts of fits. Problem is that truffles, for all their saintly food musk, are like ketchup—they overpower every other flavor. They bully nuance. Since DTF is already eschewing tradition… instead of truffles, I’d love to see DTF experiment with a more flavorful, remarkable broth.

What is remarkable about DTF is nearly everything else. Everything. The cleanliness. The knowledge and friendliness and intuition of the staff. The green beans. The fried rice. The spicy sesame noodles. The braised beef noodle soup. The red bean dessert bao buns. Everything.

Navigating a Din Tai Fung experience is dizzying. They don’t really do reservations, just a limited few a night, reserved far in advance. So it’s primarily walk-up. The restaurant opens at 5 p.m. The line starts at 4:45, and quickly colonizes the surrounding mall walkways. The usual wait time is 45 minutes to an hour for a table. Din Tai Fung is bigger than Bieber.

For a project of its size and repute, Din Tai Fung UTC has one of the most unassuming dining rooms I’ve ever seen. And by that I mean it’s not pretty. It’s a huge, immaculately clean mess hall, or college dorm cafeteria minus the hangover smell. This DTF was not designed for romance, it was designed to move some serious soup dumplings. Something about it reminds me of Ikea and it’s definitely the lights—set to a sort of weaponized fluorescence that turns every skin tone in the room the color of Anderson Cooper’s hair. It’s dinner as interrogation. But I think I know why they do this. Without searchlights, they couldn’t clean every table to within an inch of its life. DTF is the cleanest restaurant in the world. Bussers clear dishes with the monomaniacal efficiency of an Indy 500 pit crew. A busser sprays an even stream of cleaning solution from one corner to the next, forming a giant "X." He covers his stream with a towel so that no nearby diner suffers a misting. Then he just exfoliates the thing. Not sure how you could get the table cleaner except maybe set it on fire. Quality-control checkers roam the room, making sure you could safely perform surgery on their tables. Their meticulousness is shocking, and wildly reassuring.

There are spies who aren’t as well trained as these employees. DTF reportedly spends over 50 percent of its revenue on training, pay, and benefits, and they rank among the top in the industry. Before they open for business, I spot them performing a team chant. Like they’re the Lakers, and every night is the big game. It’s a little cultish and, in an American society that often shrugs and sighs at hard work, inspiring.

Our servers explain each dish in detail and tell you how to eat them. ("That’s got two kinds of crab, which is often a little too crabby for some diners. And we suggest eating these without sauce.") They seem to have cracked the space-time continuum, too, since dishes arrive seconds after you order them, yet don’t taste like they’ve been sitting under heat lamps, coagulating. A smart move may be to "slow order"—order, eat food, order more food, etc.—because otherwise it all lands on the table at once.

Order those magic green beans, which are dry-fried Sichuan style, wrinkling the exterior with fry flavor but leaving the interior popping with vine-fresh beans, then garnished with Taiwanese pickles, minced garlic, and sea salt. And the fried rice (we ordered brown because we enjoy nutrients), perfectly fluffed and not overly oiled, spackled with both white and yellow bits of egg, and green onions. The noodles with sesame sauce are nutty and spicy and life affirming. The broth in the braised beef noodle soup is so intensely flavorful you wonder why they don’t use it in the xiao long bao. The sauce on the shrimp and kurobuta pork wontons is spicy and deep (with a zing from, I believe, black vinegar), so good it could be the olive branch between wildly different cultures. Be sure to use their soy sauce with abandon—they brew their own, and it’s a revelation. There’s a blood orange martini with boba (large, black tapioca balls, famous from Taiwan-style tea), plus a lychee martini and mediocre wine by the glass.

Yes, I wish they would dim the lights. Restaurants often have lights blazed like this to encourage diners to eat and move on. And if asked where to find the best xiao long bao in San Diego, I would not send them to a mall to wait an hour for DTF’s. But because of the service, the cleanliness, the efficiency, the great sampling of Taiwanese and Chinese food, the spot-on flavors of almost every dish except the XLB—I understand why this is regarded as one of the most starkly impressive restaurants on the planet.