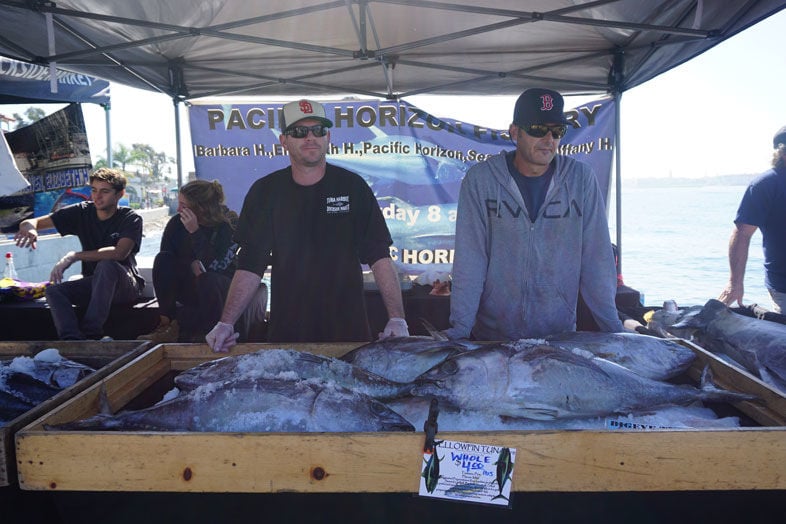 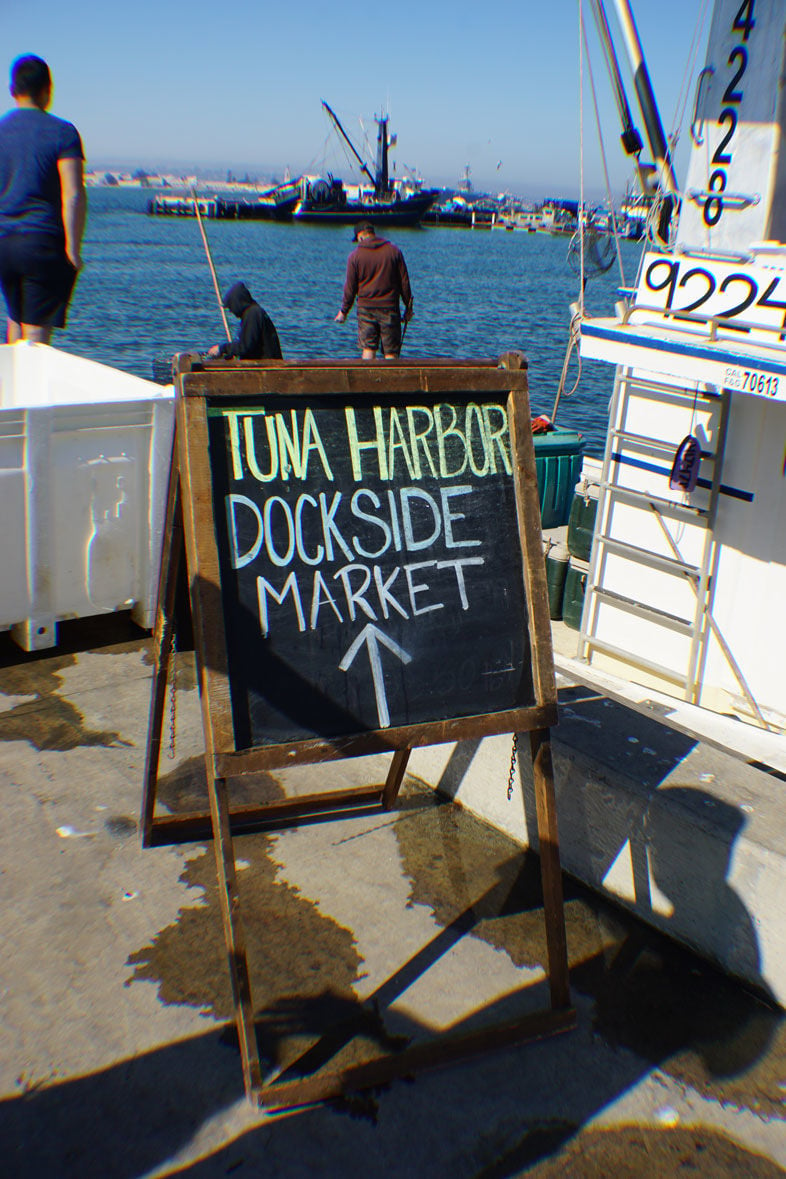 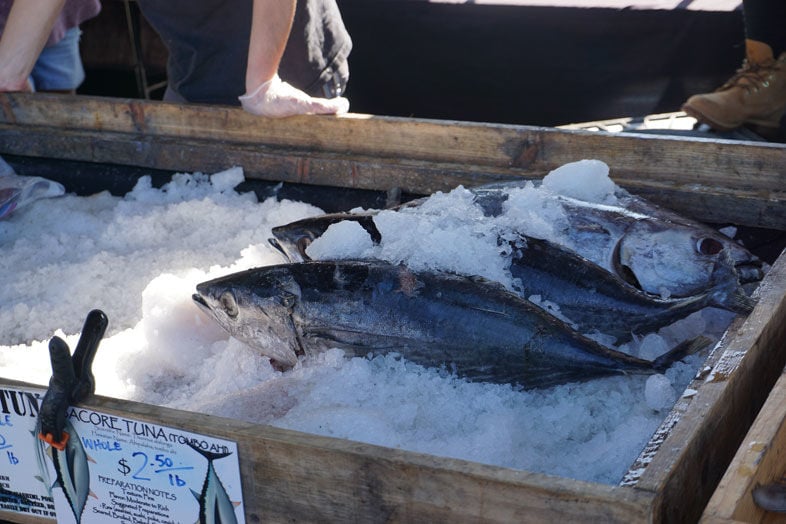 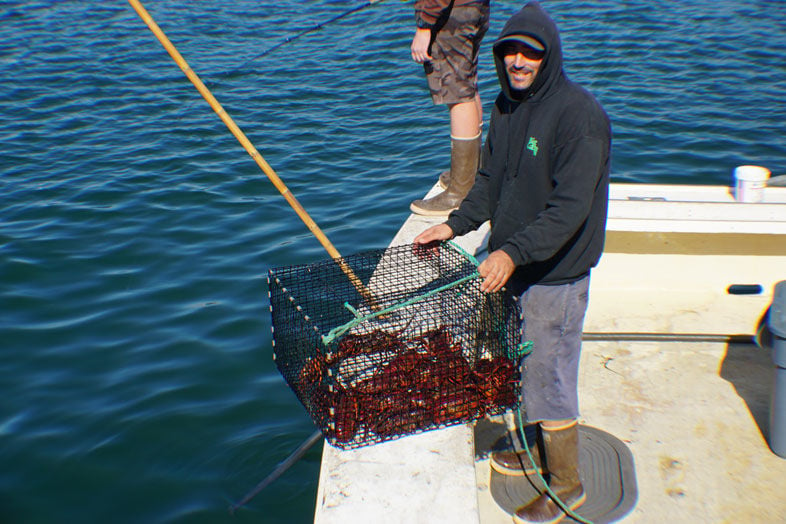 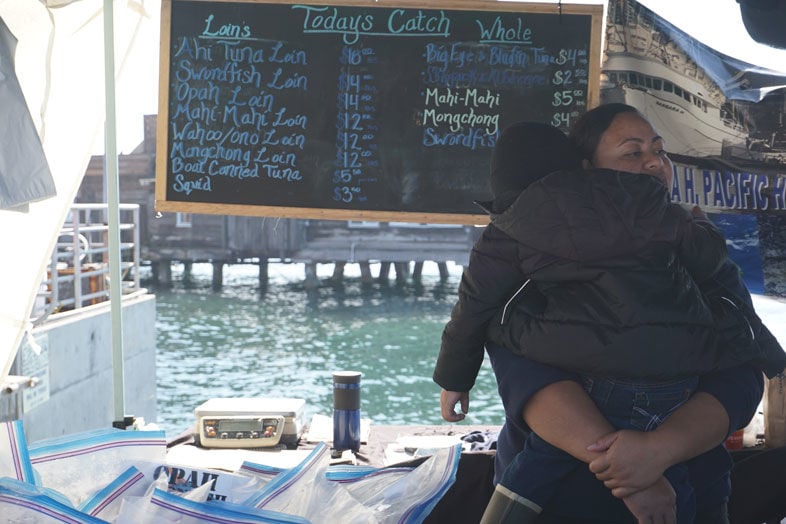 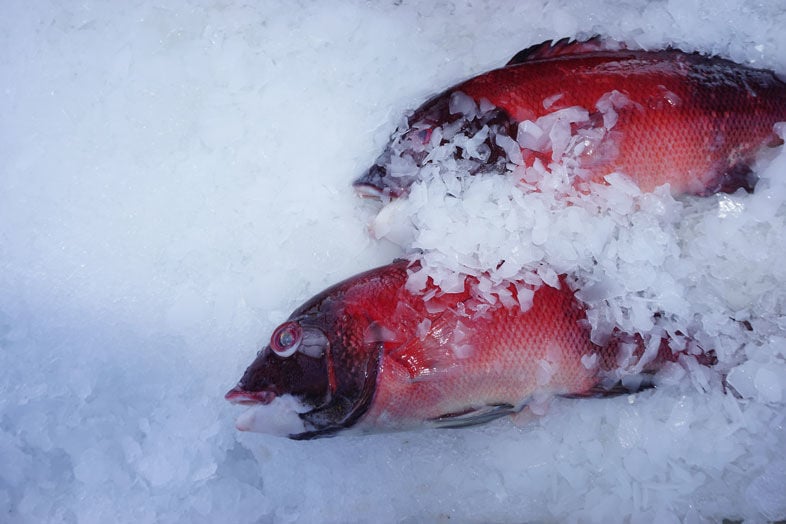 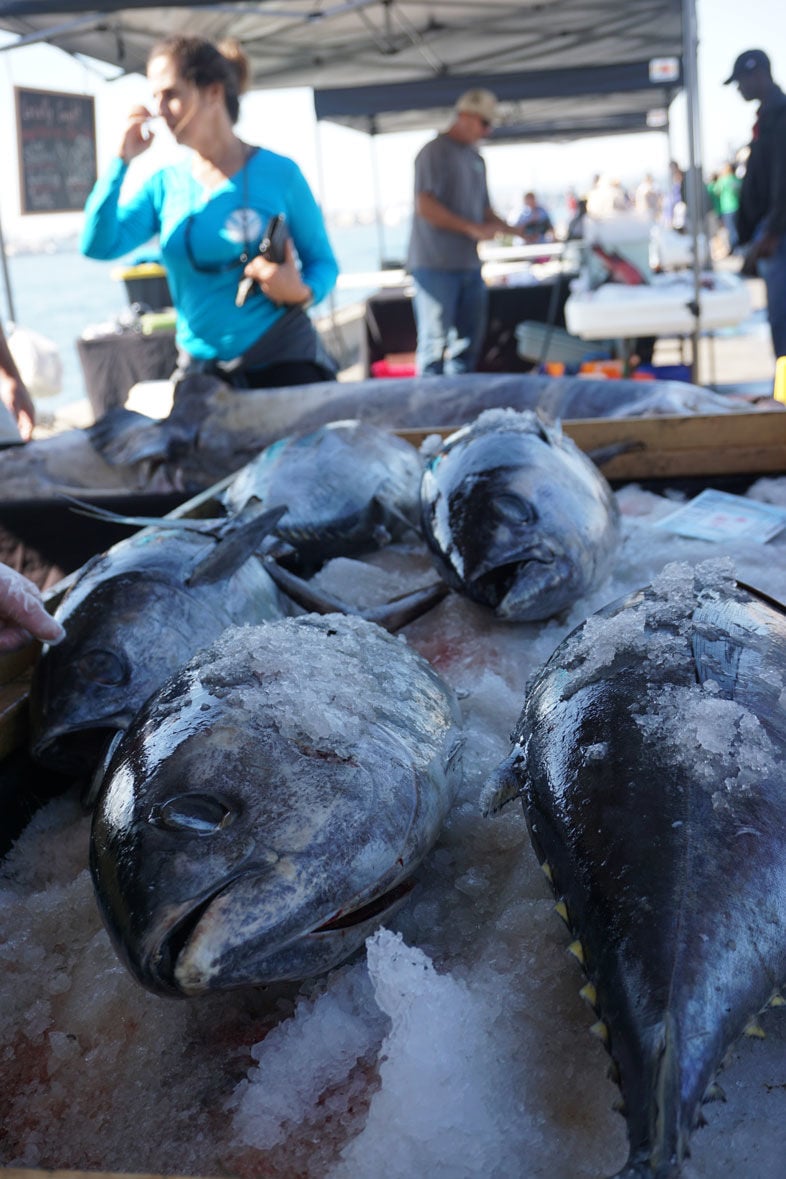 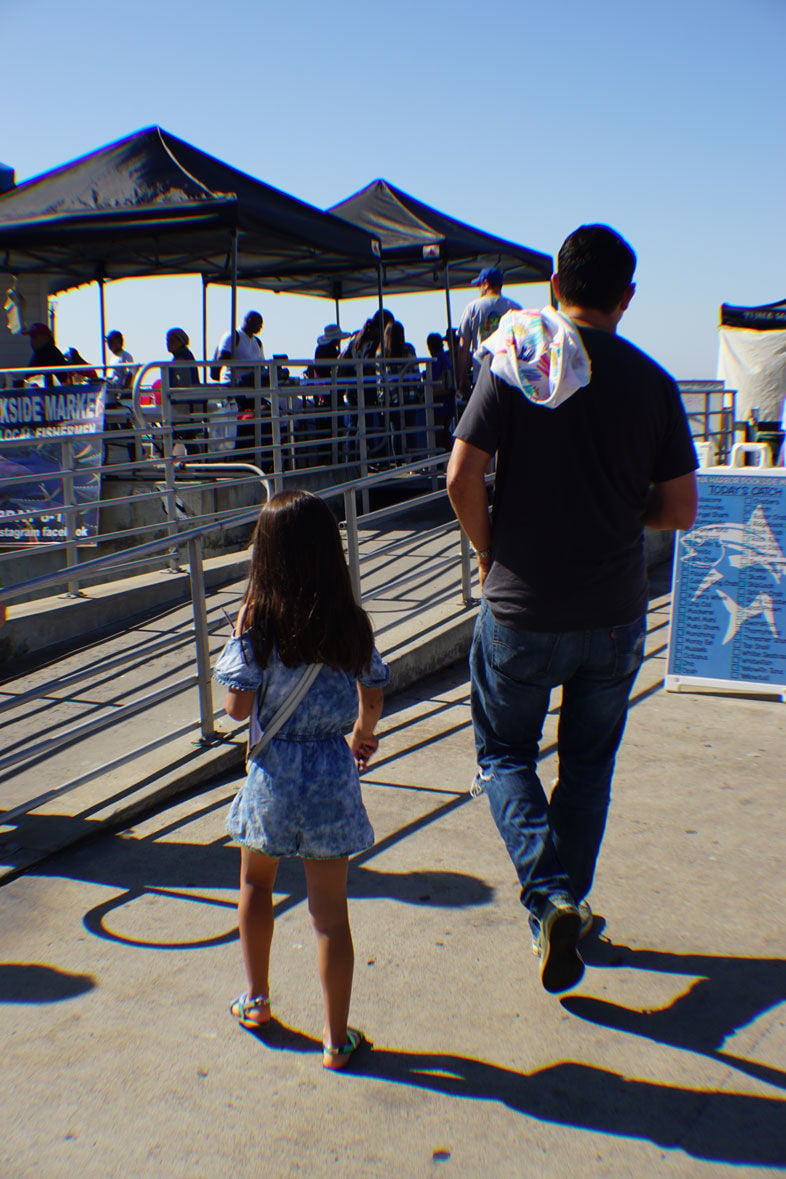 This is a first in a series documenting Tuna Harbor Dockside Market. It will include profiles, facts, and ideas from San Diego’s local fishing community. Check back in coming weeks for more.

Early texts are rarely good. No one texts at 7 a.m. on a Saturday to express dinner plans or love. Early texts are warnings or threats or panics or moms.

Oh, it’s Jordyn. This makes sense. She’s a fisherperson. Dawn is noon in fisherpeople world. In her early 20s, Jordyn Kastlunger has been waking in the dark her whole life, pulling up waterproof boots when most of us are pulling up the sheets and begging various gods for just a few more minutes of sleep.

Jordyn is the daughter of a lifelong fisherman, Martin Kastlunger. She works at Tuna Harbor Dockside Market, where her father and other San Diego fathers and mothers and brothers and cousins sell fish they caught on their family boats. During market hours, she cooks at Loaf and Fish, a shade-tent operation run by family friend and fellow fisherman, Kelly Fukushima, and his wife, Jolene. They take the day’s catch and cook ’em into sandwiches, or grill them simply, make tacos.

Jordyn is about to graduate college. I ask which one. A local community college, she says with a touch of humility. "I wanted to fish with my dad during high school instead of pay attention to my grades."

She also manages Tuna Harbor’s social media, @tunaharbordocksidemkt, and has her own: @fishin_chicks. Likes and shares and hashtags tend to baffle older fisherpeople. You can’t pull likes from the water and you can’t feed your family with a hashtag. But they know it’s necessary, in an abstract new way.

Jordyn’s text says she’s worried about the fog. And Tuna Harbor Dockside Market is located on a small pier, exposed to the wide-open sky, which, today, is a giant cataract. Fisherpeople don’t mind fog. Sky soup is their natural habitat. But San Diegans are a sun-spoiled people. With an average of 266 days of shine a year, clouds are our snow days, our self-decreed "severe weather warning." Give us a blanket and a Netflix.

Because fewer customers will show, so will fewer fishermen (four vendors today instead of the usual seven). Jordyn’s worried the market won’t be as ready for its close-up. There won’t be the usual obscene riot of halibut, bluefin tuna, yellowtail, mackerel, sardines, sheepshead, big-eye tuna—all the bounty pulled out of the waters by local boats. She wants this all to be perfect—the fish, the experience, the photos. Understandable. Fisherpeople have had a rough century.

Tuna Harbor Dockside Market is named in homage to what once was. San Diego was the tuna capital of the world. Bumblebee had their boat here. They all did. Fisherkids went to private schools with yellowfin money. Tuna paid for many of the proms at Point Loma High.

Then it all collapsed. Tuna fisheries moved overseas, where regulations were more lax and laws often chuckled at. You can still see small personal boats on trailers in the front yards up on Chatsworth Boulevard in the Point Loma hills overlooking the harbor. The airport had a tuna exhibit for a while. Not sure if it still does. This city was built on tuna, and then it was gutted by tuna.

Now Tuna Harbor is the living, breathing, thriving exhibit. Every Saturday morning from 8 a.m. to 1 p.m., the last remaining members of San Diego’s local fishing community unload their boats and sell it fresh. They are our sea yetis. The last remaining of our ancient species.

The United States has the world’s strictest regulations for fishing. That’s made us a global leader in sustainability, which is a good thing. Since the Magnuson-Stevens Fishery Conservation and Management Act was signed 42 years ago, American fishermen have largely eradicated overfishing and helped 39 species recover to sustainable levels. But the regulations have also made it hard on those same fisherpeople. Other countries don’t have the regulations, or ignore them. So they catch more, can sell it for cheaper, and squeeze the lifeblood out of a fishing family playing by the rules.

Plus, we’ve got a salmon problem in America. My daughter loves salmon. It’s her parents’ fault. She was once such a picky eater. Mac ’n’ cheese followed by pizza. So when she tasted salmon at a sushi restaurant and liked it, her mom and I jumped at the chance to feed her a healthy, clean, nutritious protein.

I’ve brought her here today to see that salmon isn’t the only fish in the water. Told her to take pictures. Write her own story. This is history, kid. "But I’m not touching any fish," she demands. Fair. She’s not nearly as grossed out as she thought she’d be.

San Diego fisherpeople haul in over 130 species. Yet in 2015, only 10 species made up 90 percent of American seafood sales. Salmon, tuna, and shrimp alone made up 55 percent. To meet that tunnel-vision demand, the US imported over 90 percent of the seafood it sold in 2017.

A local explains that the chefs show up at 8 a.m. on the dot. Then the Asian restaurant owners from Convoy. "No one knows their fish like Asians do," says one fisherman. Then the regulars like me come down after our lattes and our lack of urgency.

A sign at the front of the market is basically a roll call of what’s been caught this week, and is swimming in tanks or on ice at each stand. Even with half the usual number vendors, we’ve got albacore, angel shark, bigeye tuna, bluefin tuna, bonito, halibut, mahi mahi, mako shark, monchong, ono, opah, rock crab, rock fish, sand dabs, sheepshead, skipjack, spiny lobster, squid, swordfish, whitefish, yellowfin tuna, and yellowtail. All fresh. Some caught and immediately frozen during weeklong boating trips. Some caught this morning.

It makes a grocery store’s seafood selection look like a haiku. Plus, most of the grocery store fish is shipped from overseas. It also smells different. Grocery store seafood sections tend to smell like a cross between seawater and rotten death. Tuna Harbor smells of a cleaner, inoffensive sea.

Two younger guys on a boat tied to the dock are reeling in one mackerel after another. Not even rolling out their line. Just tossing it into the water and waiting three to five seconds before the mackerel are jumping on the hook. Like the fish can’t wait to become food. Fishing is easy. For them.

Fisherpeople have skin like belts. They’ve been cured by the sun. They are people prosciutto.

It’s lobster season, and there are cages crawling with spiny lobsters. San Diego’s lobsters are sweeter than their Maine relatives. China has similar lobsters. For years, Chinese buyers would show up at the docks and pay cash. Local chefs were priced out of the local delicacy.

There is sushi-grade bluefin tuna. That sounds criminal. For years we were taught bluefin were the spotted owl of the sea—endangered and nearly gone. But Chef Ruiz recently set me straight on that. "In order for the US to keep a seat on the international council that governs bluefin tuna fishing, we have to fish for bluefin," he explained. "So if it’s caught locally, it’s okay."

"Our local bluefin is amazing," says one fishmonger. "They’re usually not big enough to be featured at the major markets. But they’re really fatty and delicous."

Each station is simple—a shade tent like those used for tailgating before football games. Tables set up with wooden box displays, filled with ice and fresh fish. There is no designer lounge seating, no cappuccino machine.

At one station a fisherman sells sheepshead fish. Red and black like an Italian sports car, sheepshead have those lamby buckteeth. The teeth are long and dangerous, like prison shanks. I will have bad dreams about those teeth. Sure lobsters will, too. Sheepshead use ’em to feed on lobsters and break through sea urchin shells. Since they are what they eat, fisherpeople call them the "poor man’s lobster."

"They’ll actually spend 30 to 40 minutes plucking off the spines of urchin one by one," the fisherman tells me. "Once they get them all off, they’ll take one big bite of the shell and eat it." It’s lobster season, so they’re everywhere right now. Lobster traps are like their Vegas buffet.

The fisherman’s wife (his boat’s named after her) asks me if I want a live one, or one dead on ice. I ask her the difference. "There’s no difference—the ones on ice were swimming this morning," she says. "But some people won’t buy ’em unless they’re swimming."

I buy two dead on ice, of which I will make ceviche later on that afternoon.

"You got a sheepshead!" exclaims the man at the cutting station. The cutting station is essential. At Tuna Harbor you can buy precut seafood—like the glistening maroon cuts of sushi-grade bluefin—or you can buy the fish whole. You can gut it yourself, or take it to the cut man. He will gut and clean it for you, putting the fillets (and parts, if you like) in a bag. He never charges over $5 for the service.

"This fish put me through college!" says the cut man, then, half joking: "I’m the only fisherman who went to college."

Sheepshead are hermaphroditic. They start out female and then, at a certain age, morph into males. "When we first found that species, we were catching the small ones, which were all females," says the cut man. "So there were all these males left with no one to mate with. We collapsed the stock within a couple years. Now we’ve brought them back."

It’s an ad hoc lesson in sustainability—a subject every fisherman at this dock knows very well.

"You’ll notice I’ve got a system," says the cut man as he dismantles my sheepshead into four pristine fillets. "I cut the clean parts toward this part of the cutting board, and the messy parts over toward the other side."

A young boy, most likely a relative of some fisherperson, handles the money. I pay him $3.

Later that day, I juice obscene amounts of lime, dice the cilantro, shallots, lemongrass, tomatoes, and bell peppers. I cut the sheepshead into cubes, let it marinate for four hours. The ceviche is startlingly fresh, phenomenal.

I may never buy seafood from a grocery store again. That’s a lie. I’ll be in a pinch and have a dinner party and can’t wait till Saturday. But I vow to come back as often as possible, starting next week.