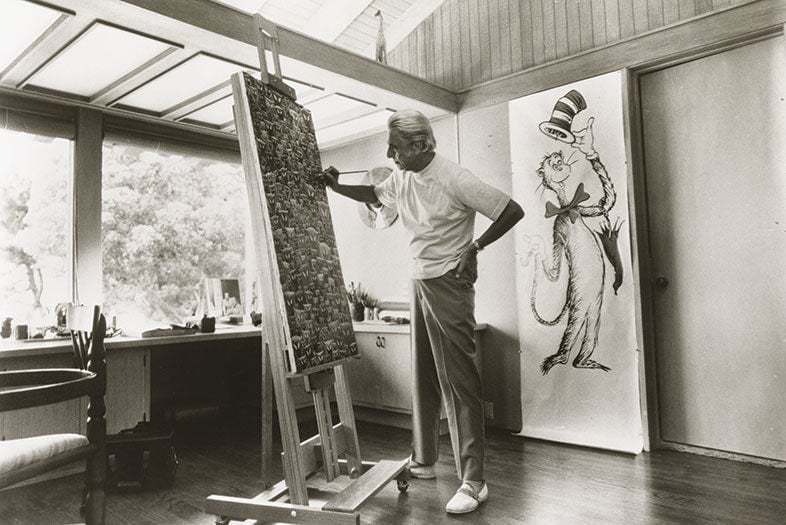 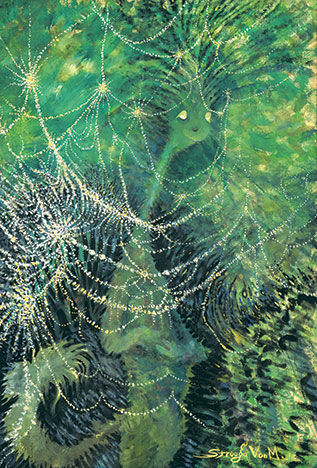 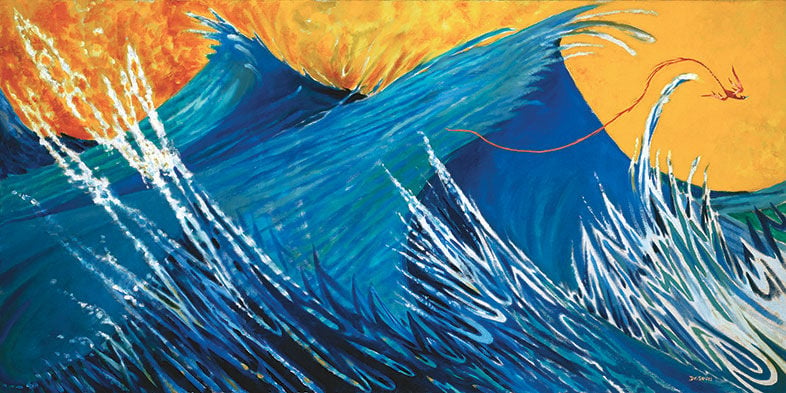 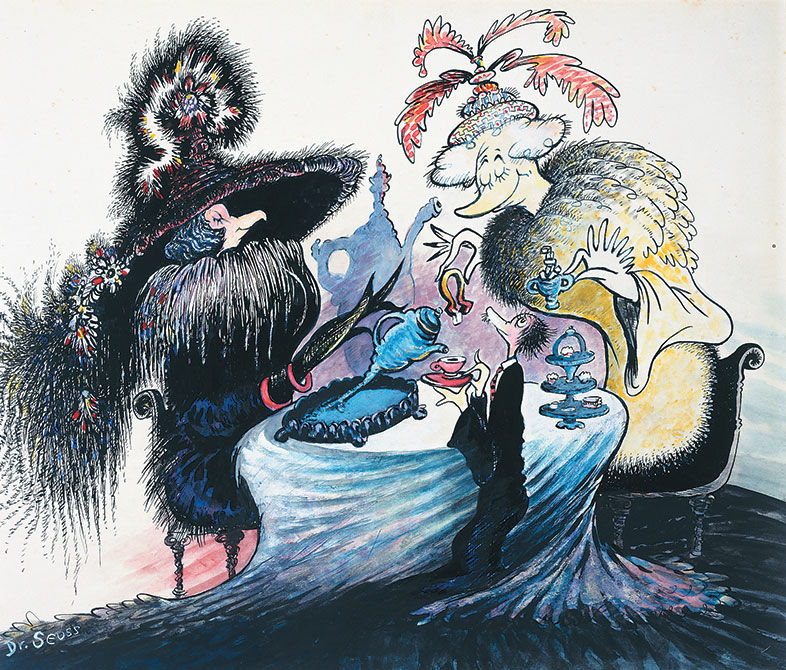 Dick and Jane were a pleasant pair of prototypical American children. They had a nice dog named Spot, too. Millions of kids read about their everyday activities, in primary school storybooks widely used to get youngsters to read. That is, until a clever cat with a flamboyant hat showed up at the door of Sally and her brother in 1957.

This signal event was the publication of The Cat in the Hat. The time was ripe for something new, inspiring, and pleasurable for children to read. Dr. Seuss more than fit the bill, and now it’s impossible to imagine our literary landscape without him. And in one fell swoop, the pseudonym Dr. Seuss became as famous as that of another American great, Mark Twain. In the 50-plus years that followed, the books of Theodor Seuss Geisel and their characters became iconic.

In the same way that Hannibal, Missouri, and Hartford, Connecticut, lay claim to Twain, La Jolla (and more broadly, San Diego) are Seuss’ places. He made his home here for nearly a half-century, from about 1953 (full-time) until his death in 1991. The main library on the UC San Diego campus carries his last name, and a large number of his priceless manuscripts and papers are in the university’s special collections. Since 1998, when the Old Globe Theatre premiered the musical version of Dr. Seuss’ How the Grinch Stole Christmas!, the show has endured here as an annual holiday draw.

The San Diego History Center plans to make much of Seuss’ connection to this city in an ambitious exhibition about him assembled to mark the 2015 centennial of Balboa Park. The elaborate show, entitled INGENIOUS! The World of Dr. Seuss, opened on November 21 and continues through the end of 2015. Like any Seuss-related project, it required the blessing of his widow, Audrey Geisel, and her staff at Seuss Enterprises in La Jolla.

It’s been nearly three decades since the last major museum show in San Diego was dedicated to this transformative culture figure. Dr. Seuss From Then to Now premiered at the San Diego Museum of Art in 1986, five years before Geisel’s death. It also toured to six American museums through 1988.

This new show strives to be different, asserts Charlotte Cagan, director of the History Center.

"Placing Geisel in his context as a San Diego artist just hasn’t been done before," Cagan says. "This is the perfect place to see him in this light. I think he wanted to be seen as an artist."

William Dreyer, curator of the Art of Dr. Seuss project for the Chicago-based publishing company Chase Art, takes a similar view: "This show will go well beyond the illustration art. We hope it gives people a broader view of him as a visual artist.

I hope people will walk away with a big ‘wow.’ It won’t be quite what they expect."

"On any library shelf you’re sure to find illustrators attempting Beatrix Potter or Maurice Sendak or Chris Van Allsburg, but never Seuss. It can’t be done." —Illustrator Lane Smith

He should know. Dreyer has overseen scores of Seuss shows and is intimately involved in the selection of images for editions issued by Chase Art, which is the publisher of authorized estate editions of Seuss paintings and illustrations. Dreyer is collaborating with the History Center on this exhibition.

Just what dimensions of Seuss remain unknown to legions of readers? Dreyer points to his surreal paintings of cats, painted in the 1960s, which will be represented in the show. There is Cat Detective in the Wrong Part of Town, with its madcap, fractured mosaic of buildings, or Green Cats with Lights, its feline so ghostly he looks as if he might disappear into the misty green that surrounds him. They are among what Seuss called his "midnight paintings"; he didn’t exhibit them during his lifetime, except for a single canvas he donated for an arts fundraiser.

Another main focus of the show will be his connection to San Diego. None of his books were set here, at least literally. But there are vivid traces of its hilly terrain and Mediterranean-inflected architecture in a good number of his illustrations.

The sense of place is quite direct in his seascapes, which use the view from the studio in his longtime La Jolla home. Two examples originally done in oil on canvas will be on view: Firebird and Freebird, featuring his sense of exaggerated form and keen sense of color. Dreyer calls them "gems of the collection." One depicts calm seas; the other, choppy waters. The birds are typically untrue to nature, mere flourishes of stylish line; the skies have intense patterning and hues.

Birds also figure into the portrait of Seuss as a local, in gently satirical paintings he dubbed his Birdwomen images. These "birds," with a strongly human resemblance, are a touch vain and a bit flashy. One of these works—which also date from the 1960s—was the only painting Geisel offered for sale during his lifetime; the occasion was a fundraiser for the then-La Jolla Museum of Art. It pictured an aristocratic pair of birdwomen in Mrs. Norilee Schneelock Poured, Miss Nesselroda Sugared. Or Raising Money for the Arts in La Jolla. Another surreal take on the local landscape, with a bit of Seussian narrative built in: I Dreamed I Was a Doorman at the Hotel Del Coronado (1970). The doorman is little more than a human speck in this sprawling seaside scene, thick with whimsical architectural detail.

Geisel’s paintings made their public debut in a 1995 book called The Secret Art of Dr. Seuss. Visitors will be able to see them in their original size in one gallery of the exhibition. But there is a proviso: They won’t be viewing the originals.

The versions on exhibit are exacting reproductions—posthumous editions from Chase Art. Geisel’s widow, Audrey, doesn’t allow the originals to go on public display.

Seuss’ sculptures, his fantastical takeoffs on wall-mounted hunting trophies, are also shown in reproductions. Their collective title is Unorthodox Taxidermy and they feature creatures like the Flaming Herring and the Blue Green Abelard. (Of course, nothing was stuffed; the originals were made of plasters and painted by Seuss in the 1930s.)

Should it matter to visitors that the works they will see are copies? Not really, unless the show was being billed as Seuss: Painter and Sculptor. While it would be preferable to see the originals, of course, his real genius isn’t as a painter or a sculptor. It lies in the power of his imagery, the remarkable singularity of his creatures, whether a cat, an elephant, or a Grinch. The accomplished illustrator Lane Smith, who did the images for a posthumously published Seuss book, Hooray for Diffendoofer Day!, said it well: "On any library shelf you’re sure to find illustrators attempting Beatrix Potter or Maurice Sendak or Chris Van Allsburg, but never Seuss. It can’t be done."

Seuss’ characters will also appear as large bronzes originally created by Leo Rijn in the 1990s. These work well for the reason that Lane pinpoints: Seuss’ characters retain their iconic identity on any scale. The exhibition will include the Cat, the Grinch, Horton, Sam-I-Am, and the Lorax. Each gets a substantial niche in a large section of the show. And each is accompanied by a wall-scale quotation from the book that speaks to an essential theme of that enduring character and his story: generosity for the Grinch, community for Horton, and so forth. There will be an activity associated with the characters, too. At the Grinch’s niche, for example, there will be a letter-writing station where visitors can pen a message to a patient at Rady Children’s Hospital.

"I am hoping we will inspire everyone, adults as well as children, and that we will stimulate their own creativity," Cagan says.

While the show wants to accent Seuss’ identity as a visual artist, the bronzes suggest that such a description could be limiting. His visual versions of his characters are inseparable from their stories.

No doubt those who love Seuss’ books will take delight in the images from his paintings. They will likely embrace the bronzes, literally and figuratively, since none will have a "Do Not Touch" sign. But Seuss’ ingenuity as a visual artist alone isn’t what made him a cultural icon and isn’t what will draw people to this show. In his books, the visual and the literary are inseparable in a way that very few classic children’s authors have matched. His genius is utterly hybrid. His greatness as a storyteller requires both word and picture. After all, what would Cat in the Hat be without Sally and her brother and that awful rainy day when they had nothing to do?