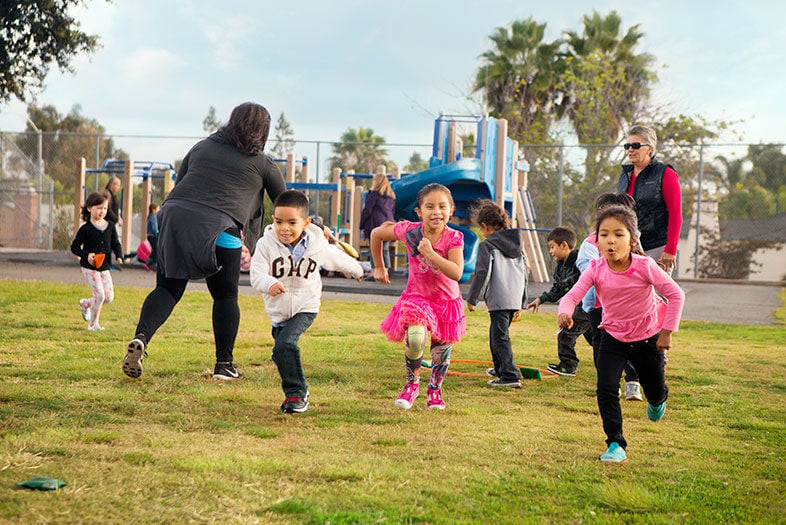 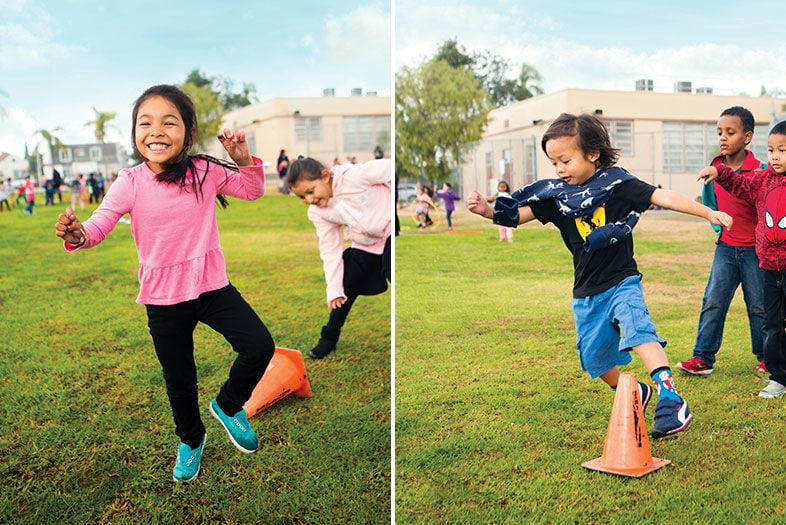 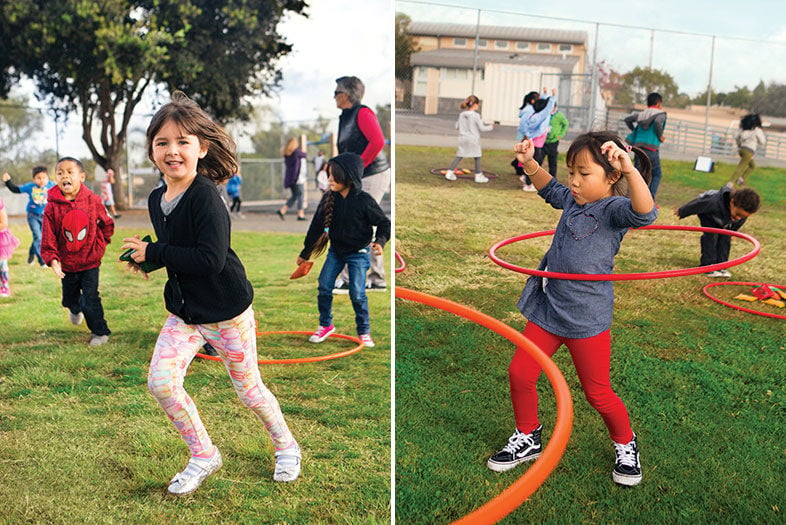 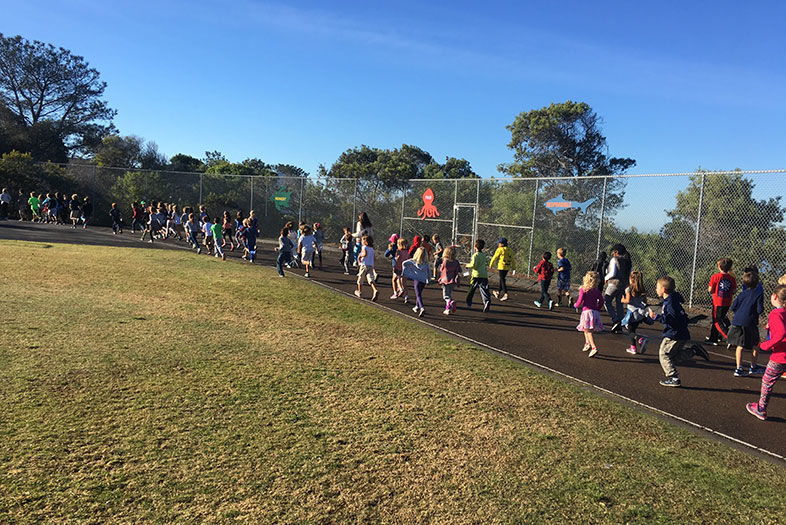 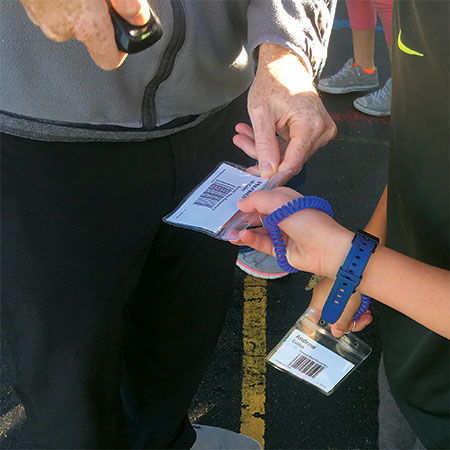 Mae Pearson’s 28 kindergarten students bound into class full of noise and energy. They tell her about upcoming birthdays, flap their arms pretending to be birds, squirm, and clap as they find their seats on the colorful classroom rug.

Pearson smiles, chats, and walks over to the interactive whiteboard. With a click, she’s started an educational video. The kindergartners jump up and into position.

"I can follow the rules, and we’ll have a good day," they sing and dance along to the video. "I can keep my hands to myself."

"Clap your hands to the days of the week," the video instructs. "Now let’s do it double time!"

A song about the months of the year encourages the kids to gesture along, including a thumbs-up when they get to their birthday month.

Pearson asks: "Did you get all your wiggles out? Deep breath."

The students do their best yoga-like deep breathing.

There’s a noticeable calm in the classroom.

"Okay, my friends. Let’s get ready to learn."

Here at Ericson Elementary School in Mira Mesa, Pearson is applying a concept that educators have long suspected and mounting research supports: Physical activity helps kids stay focused and well-behaved in the classroom.

At a time when nearly one in three American children are classified as overweight or obese—triple what the obesity rate was 30 years ago—it’s another reason teachers are working to put more movement in kids’ school days.

Students with greater access to physical education, recess, sports, and even quick breaks in classroom instruction show improved mental health, more memory and concentration skills, and better grades in math, reading, and spelling, according to data from the Centers for Disease Control and Prevention.

"At first it seems like getting them up and dancing is counterintuitive to getting their work done," Pearson says, "but surprisingly, it gives them that burst of energy to get their brains moving and focused."

The federal government’s recommendation for kids ages 6 to 17 is at least one hour of physical activity every day, with comprehensive school-based programs as an essential factor in the equation.

In California, State Board of Education policy says elementary-school-aged children should get at minimum 200 minutes of physical education per 10 days. The guideline for middle school and high school students is twice as much.

Yet with all that’s known about how busy bodies help busy minds, physical activity during the school day isn’t a given for San Diego students. School districts under pressure to improve standardized test scores and offer a range of enrichment programs must find time in a jam-packed school day for structured and unstructured play, along with money for luxuries like P.E. teacher salaries and specialized equipment.

Lynn Barnes-Wallace is San Diego Unified School District’s physical education coordinator. After two decades as the P.E. teacher at Hage Elementary in Mira Mesa, she now works from the district office to oversee P.E. programs and resources for more than 200 pre-K through 12th grade schools, and believes school-based physical activity should be a greater priority for school districts, parents, and the community.

"P.E. needs to be as important as the marching band," she says. "Somehow we’ve lost that correlation between a healthy child and a healthy mind. Healthy kids are better learners."

Compelled by studies of the relationship between academic achievement and body mass index, Barnes-Wallace created a "P.E. class in a box" for the district’s underserved elementary schools. Called IMPACT—short for Increasing Movement and Physical Activity in Class Time—the program guides students through five fitness stations for a 20-minute, full-body workout.

The equipment for IMPACT is minimal, and it’s adaptable for different ages and skill levels. For instance, younger students might walk on all fours like an animal, while older students could do planks.

"It’s a little more fun and developmentally appropriate," she explains. "We have to build up those muscles to get to the push-up."

IMPACT has so far been implemented at elementary schools where P.E. resources are limited, including Rowan in Fairmount Park, Florence in Hillcrest, John Adams in Normal Heights, and Edison, Central, and Franklin in City Heights.

"It’s not the perfect solution, but it’s a step in the right direction," Barnes-Wallace says.

She struggles to find the funding and faculty to accomplish everything she’d like to do for San Diego students. So she fills in the cracks with volunteers from local universities and grant funding from major donors like Target and Kaiser Permanente.

Even at schools with traditional P.E. programs, it can be hard for students to sit still through hours of classroom lessons. Teachers who want to offer students "brain breaks" during regular class time have to be enterprising. While local school districts and parent-teacher organizations can cover basic school supplies like pencils, paper, and books, classroom teachers are either paying out of their own pockets or fundraising for extras like flexible seating, fitness mats, and even high-tech activity tracking tools.

At Ericson, Pearson recently set up a crowdfunding campaign for just under $500 through DonorsChoose.org for classroom materials, including bean bags, balance discs, and an Apple TV media console to access dance, yoga, and exercise videos.

"As a teacher, you want to be creative. You try to make things fun but educational," she says, giving the example of a simple game like tossing bean bags printed with vocabulary words, which serves multiple purposes: The repetitive movements can aid memory, teach basic coordination, and engage young students’ super-short attention spans.

"Kids today are lacking gross motor skills," Pearson says. "They get a lot of screen time but they’re not getting outside to play or walk to school."

Jaclyn Alvillar, a sixth-grade teacher at Loma Verde Elementary School in Chula Vista, called her DonorsChoose campaign "Support for Squirmy Scholars!". She hopes to raise enough money this school year to buy four Hokki stools, at $110 each. The ergonomic rubber stools allow students to rock, twist, and turn while sitting in one place.

P.E. needs to be as important as the marching band. Somehow we’ve lost that correlation between a healthy child and a healthy mind. Healthy kids are better learners.

"Flexible seating works not just for my students with special needs, but for everybody," Alvillar says. "Think about it. If adults sit for extended periods of time, we start to check out, too."

Alvillar first saw the wobble stools in action during a field trip to the Chula Vista Public Library’s new Innovation Station, a Qualcomm-sponsored student lab focused on science and technology.

"I noticed how engaged my students were," she says. "I thought, ‘I would like a whole classroom of these!’"

Loma Verde is in a low-income neighborhood where many families struggle to put food on the table, according to Alvillar. By fundraising online, she can reach outside her community to find potential donors for her classroom initiatives.

Until she’s able to buy the Hokki stools, Alvillar allows her students to sit in rolling office chairs, beanbag chairs, and on a futon. The ability to move around the classroom gives her students some latitude for group brainstorming and individual reading time, she says.

She also uses music to add more physical activity to her classroom curriculum; for instance, by teaching the kids how to line dance, then how to mathematically determine their target heart rate.

"Our bodies need oxygen; that oxygen flows to the brain," she says. "The physical aspect of learning is often overlooked. Classrooms today are different, but I think if our teachers growing up were able to have the autonomy to do what we’re doing, they would have tried it, too."

Sunset View Elementary School P.E. teacher Corey Brucker is getting more physical activity into his students’ schedule by targeting the 15 minutes before their school day even begins. The Point Loma school is one of several in the region that offers a running club to kids willing to show up before the first bell rings: Students in transitional kindergarten through fourth grade can walk, skip, or run laps on a track to earn prizes. Students who accumulate 10 miles—the equivalent of 70 laps—get a small plastic token shaped like a foot. Every 25 miles earns a ribbon, and every 100 miles or more earns a trophy. "We play music and it’s a fun track to run," Brucker says.

So far the incentives are working. Sunset View kids had already logged more than 10,000 miles by the third month of this school year, according to Brucker. Last school year, the student body ran some 42,000 miles. Of the school’s almost 500 students, 180 achieved the 100-mile goal.

Though Brucker has taught running programs for 25 years, new lap-tracker technology has made counting miles more efficient. Each student carries a card with a barcode on it, which gets scanned after each lap. The laps are electronically tabulated and the results are posted weekly.

Brucker says Sunset View is in a relatively affluent neighborhood, where even if he weren’t able to offer the full regimen of P.E. activities, the children would still have access to after-school sports like soccer and swimming.

He knows this isn’t true of all San Diego neighborhoods. He says he worries for a generation of kids receiving inadequate physical education from K through 12.

"If we’re not careful, we can get kids who aren’t physically active for the rest of their lives," he cautions. "It’s more than how to kick, how to catch, how to throw. We’re teaching the enjoyment of the activity, but also healthy living."