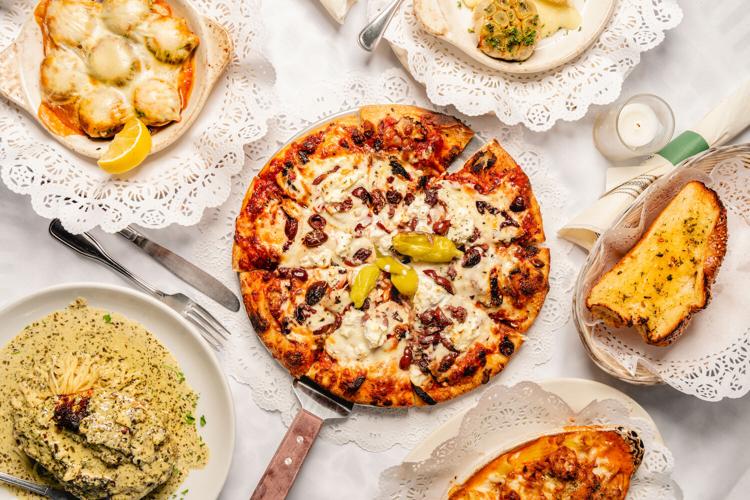 Old Venice is the kind of place that keeps the doilies industry in business, and that should never change. 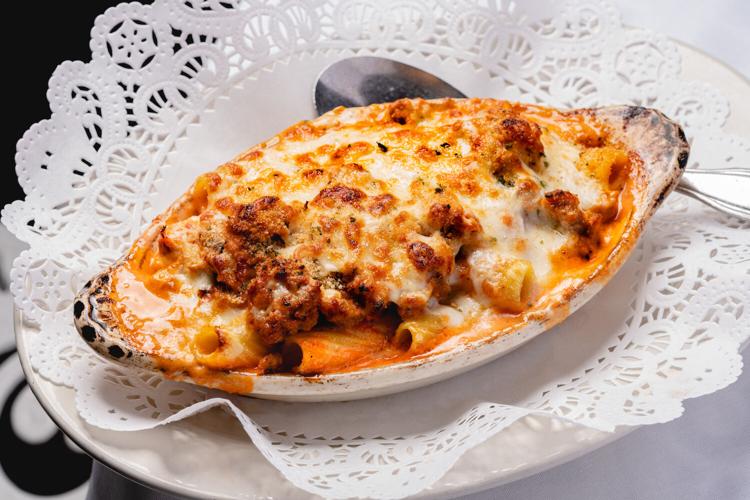 The baked rigatoni can be used as a medical test. If you dislike it, you may be dead inside. 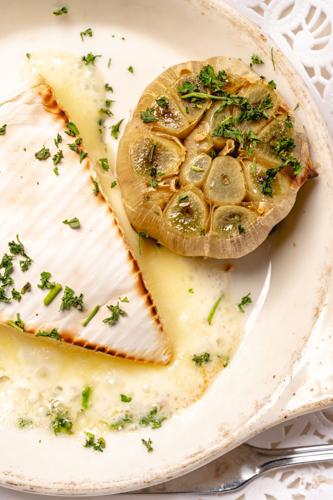 A simple, delicious classic—baked brie with roasted garlic. Order it. 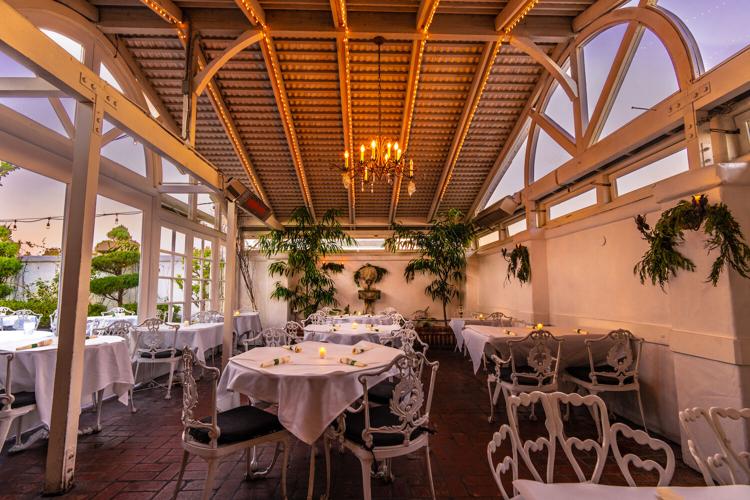 The back patio is everything; whether outside or in this gazebo/human greenhouse of dining. 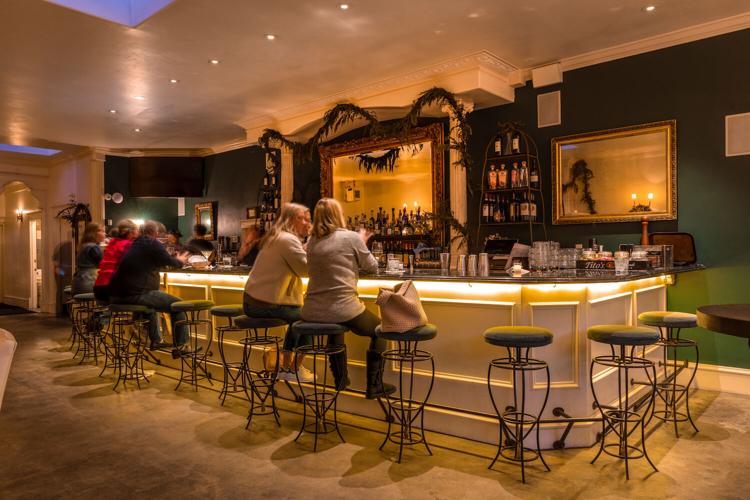 The bar is where locals come for unfussy dinners and to catch up on gossip. 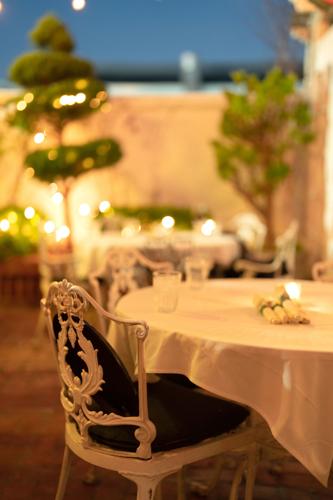 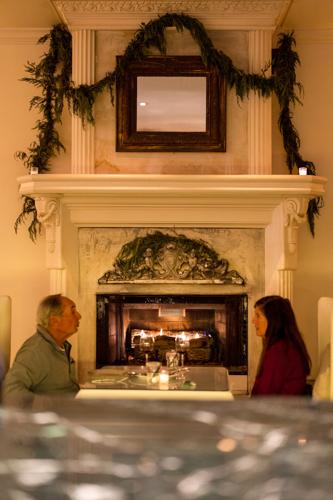 The most interesting seat in the world—roaring fireplace for two in the middle of the bar scene.

A neighborhood has grown old and then young again in this room. Four decades is a staggering amount of garlic bread and magic mushrooms, but it’s more than that.

The dining room in Point Loma’s Old Venice is the warm, candle-lit center of one of San Diego’s most historic neighborhoods, where generations made lives and ghosts, shared their joys, crimes, heirlooms, memories, and baked rigatonis. This month starts the 75th year San Diego Magazine has been covering this city, and specifically Point Loma—in the ‘50s, it  was called San Diego and Point Magazine—so I’ve come here to sit in a timeless place where it began.

A couple at the bar—in their 60s, spry and fiery thanks to their road-bike habit, they say—have been coming here for 25 years. They can walk home, they say, with an air of pride and unspoken ownership. When a restaurant gets to the long-tooth of Old Venice (opened in 1980 by Karl Walter, still in the family), ownership is almost a philosophical debate that involves Karl Marx.

The tree on the back patio says everything you need to know about not only Old Venice but also Point Loma and Ocean Beach. The patio is their special thing, charming to a rare degree. The George Clooney of patios.

It’s got ornate iron chairs painted white on a wooden deck, bushes carved into topiaries, wild-growth and vines flirting over the fence, a glass-and-white trimmed greenhouse for winter dining, twinkly lights on every branch, in every nook, light libido music on the speakers.

The amount of candles here makes Catholicism look under-flamed. It’s dinner as a vigil. Before the advent of Netflix, chill, and miracle pills, sex lives in Point Loma depended on this patio. It still plays a vital role.

Anyway, this tree is the centerpiece, a real peacock with branches. And if you look closely, in its middle, you can see a bird’s nest of extension cords. It’s almost an art piece depicting the telephone poles of O.B. and Point Loma—famous for having 20, 30 wires chaotically and randomly extending into various homes. The charm here wasn’t purchased; it was electrical-corded over decades.

The improv magic of “Old V” also includes the most fascinating two-top in San Diego. The front of the restaurant is split into two halves—the right side a formal white dining room, and the left a bar for louder flirts. On a Friday night, the bar is jammed with Point Lomans—titans of commerce in their weekend wine shirts, exquisitely painted middle-aged women in leather alternatives, sun-stained sea people in flannels and trucker hats.

And right there in the middle of it is a plush table for two seated in front of a roaring fireplace. It’s such a grand, romantic table, just plopped in the good-natured chaos. I watch a couple butts briefly hover over the appetizers on that table, and the couple seated could give a damn because they seem to know what they signed up for. It’s like a dating reality show with a live studio audience. Riveting.

For locals, this place is their own Gaslamp and Little Italy. And they don’t get cheated on the wine. Industry standard says there are 4-5 glasses in the average wine bottle. Old V clearly believes each bottle contains two glasses. Such pours feel neighborly.

You know the food here without eating here. Every neighborhood has this sort of comfort Italian, neither the best thing you’ve ever eaten nor upsetting. There are good, even addictive, bites. Other bites will have you grateful for the invention of salt shakers but wondering about their whereabouts. If you dislike the baked rigatoni bolognese, there is something bad in your blood. It gives you the same premium comfort emotions that wearing your Sunday sweatpants does—spicy Italian sausage, onions, and mushrooms, slathered in creamy garlic marinara, and baked for a Parmesan crust up top.

The “magic mushrooms” is the most storied appetizer—the one the bartender, who’s worked here on and off for 20 years, says is like their “Freebird.” A small dish of button mushrooms are stuffed with shrimp and snow crab, layered under a tarp of provolone cheese, baked.

Instead, order the baked brie. The little black dress of “fancy” apps, page one in the playbook. And theirs is simple-delicious, tastes like a great ’80’s ballad—a full bulb of garlic paired with oil and baked until soft and spreadable on sesame-crusted, airy bread, then topped with the hot, melted brie. Some songs never grow old, don’t need more cowbell or trending ingredients.

Another Old V classic is the chicken florentine—melted cheeses, spinach, mushrooms, sun-dried tomatoes, pine nuts, and a pesto cream sauce. The sauce is poured much like the wine, with a Vegas amount of restraint. I’m all for it if the sauce is moaning good, and it’s merely pretty good, the cream diluting the flavor (cream swallows salt, and this needs more).

Part of me wants to send one of the city’s top chefs into Old Venice to make a few small but necessary tweaks, crank up the flavor, catch up with the modern palate (for instance, the Brussels sprouts in their lamb lollipop dish are either boiled or steamed, and wet sprouts are hard to love). Another part of me knows if it did, reservations would be booked until the apocalypse. Because I’d pay to sit on that patio, stare into the twinkle, and take whatever hits and misses may come.