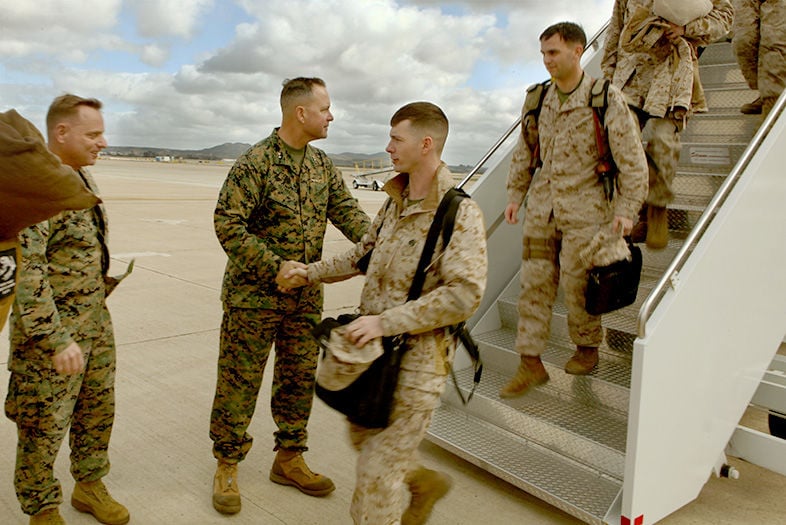 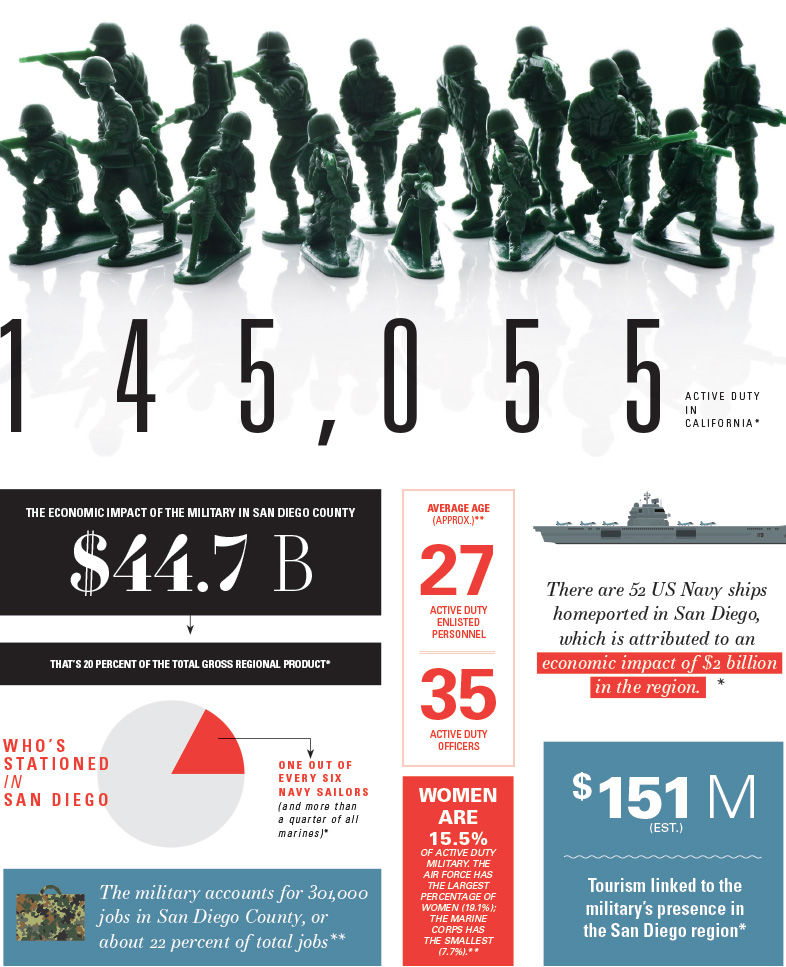 Even in San Diego County, which boasts a population of more than 230,000 veterans, making the transition from soldier to civilian can be tough. James Seddon is an example.

After his last deployment in Afghanistan, Seddon struggled emotionally. Thanks to the urging of his family, he sought help at the VA San Diego Healthcare System in La Jolla, where he was diagnosed with posttraumatic stress disorder and received treatment. "It changed my life," says Seddon, who now works in IT at UC San Diego. "I wasn’t on a good trajectory. Things are a lot better now."

He volunteers with Iraq and Afghanistan Veterans of America (IAVA), the first and largest service organization for veterans of the post-9/11 wars. He says the people he met and the experiences he had overseas "drove me to try to give back to the veteran community in some way. I feel like I owe them something."

It’s estimated that as many as one in three veterans of the wars in Afghanistan and Iraq have PTSD.

Veterans have struggled to transition to the civilian world, complicated by the fact that the military mind is trained not to ask for help.

That reluctance is one of the primary reasons why Army veteran Paul Rieckhoff founded IAVA 13 years ago. The nonprofit now has more than 7,000 members here.

"It started with my own infantry platoon. They were an incredible group of young leaders, and just needed help transitioning home to reach their potential," Rieckhoff says. "The challenges veterans face when they return home are complex and often difficult to address alone. Our platoon stuck together and helped each other at home like we did in combat."

Rieckhoff says veterans are "strong, independent people who want to be self-sufficient. Veterans don’t ask for much, but the least we can do is make sure their transition home is full of opportunity. It’s not charity, it’s a smart investment in their future—and in America’s."

The county is estimated to have America’s third-highest population of veteran residents, and it’s the number-one destination for newly returning veterans.

Every day, IAVA volunteers help veterans make the frequently difficult transition back to civilian life, enroll in school, find jobs, and stay on the right path.

"San Diego is a hotbed of veteran innovation, unity, and impact," explains Rieckhoff.

IAVA members in San Diego, such as James Seddon, Steve Padilla, and Linda Stanley, host local events to connect, unite, and empower veterans, and they have traveled to advocate for San Diego in Washington, DC.

Rieckhoff says San Diego opens its arms to veterans of the post-9/11 wars because it’s a community that "knows and understands where veterans are coming from."

Still, he emphasizes, San Diego’s veterans aren’t exempt from the challenges they face nationwide, including long VA hospital wait times, a lack of recognition and services for female veterans, and the crisis of veteran suicide.

"Success in any community has got to be driven by political, business, and social leadership that listens to veterans," Rieckhoff says, "and combines an air game, which is national support, with a ground game, which is local support."

Now more than ever, support is critical. "The thing with Afghanistan is the absolute imprinting of trauma on the veteran because of the multiple deployments. It has been a devastating war," says Bill Rider, a retired marine who fought in some of the bloodiest battles of the Vietnam War, including the Battle of Khe Sanh. Rider founded American Combat Veterans of War, a volunteer group with offices in La Jolla, Oceanside, and Camp Pendleton that counsels and advocates for combat vets who’ve been diagnosed with psychological injuries and helps them make the transition to civilian life. He has helped bring countless Afghanistan veterans living in San Diego "back to the world," aka civilian life—including those who were incarcerated and those on the brink of homelessness or suicide.

SDMAC aims to show just how important the military and veteran communities are to this city and county. Another aim is to demonstrate that they need the help of the entire community to make the successful transition once their service to their country comes to an end.

"Our goal is to educate the public in a friendly way, to show people that our military and veterans not only serve here—they live here, they work here, they coach Little League here. They are a part of the fabric of the San Diego community."

More in Tribute to the Military