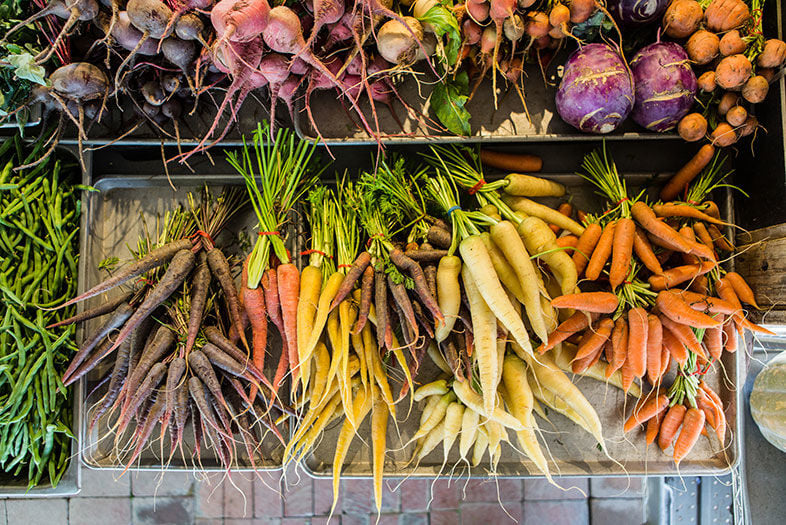 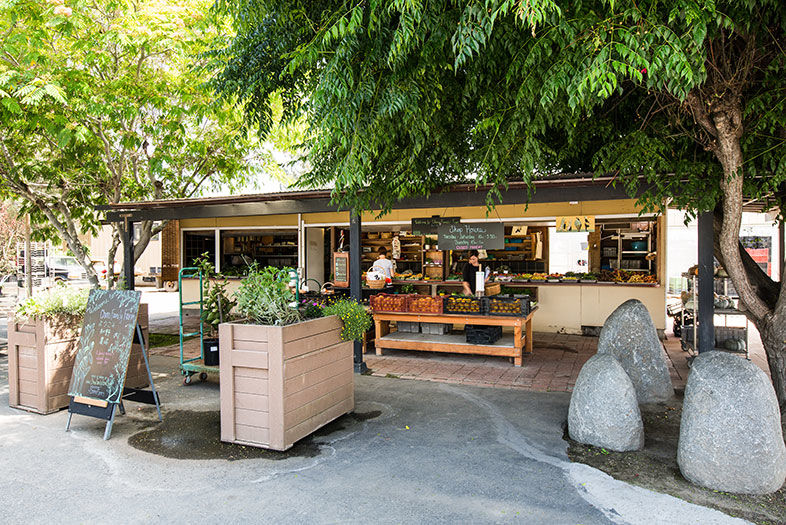 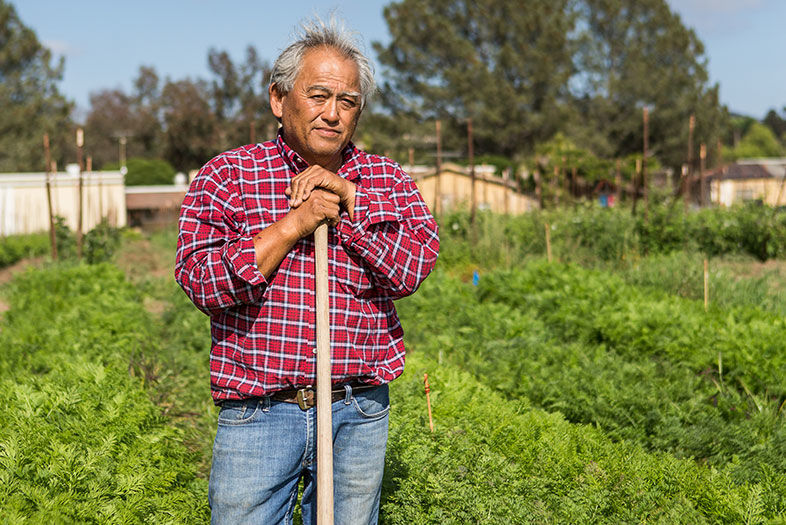 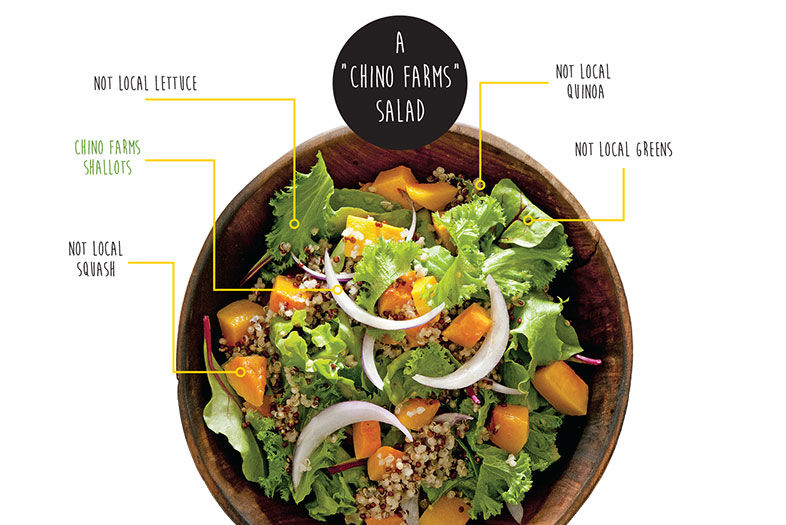 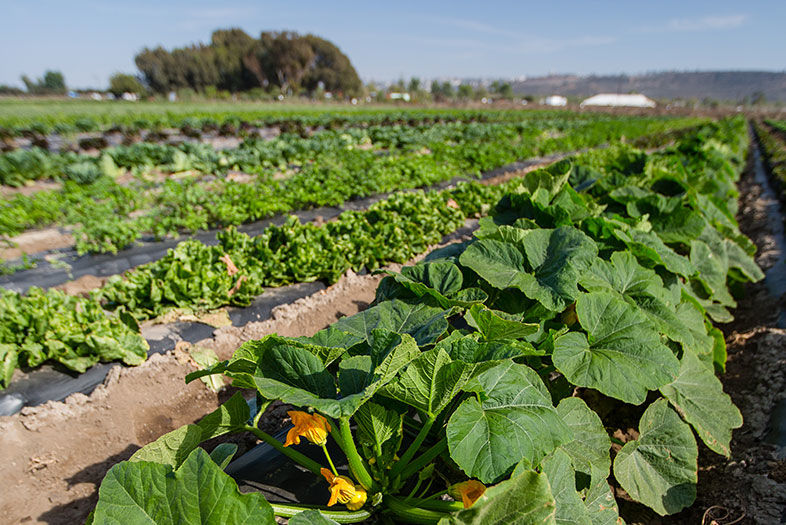 "A new restaurant opened in La Jolla," says San Diego farmer Tim Connelly, renown for his tomatoes. "I went in to try to sell them my food. They didn’t buy any. Eight years later, a friend called to say ‘Hey, I just had your salad at that restaurant!’ The restaurant had been claiming to sell a ‘Connelly Farms Salad’ for eight years. They never bought a thing from me."

The farm-to-table movement is (or was) a very good thing. Restaurants buy from local farmers, supporting the area economy and serving their customers the freshest possible produce grown in season. Knowing your farmer also lets you ensure you’re buying from people whose methods match your restaurant’s and customers’ values, whether that means organic, sustainable, non-GMO, fair trade, etc.

Like any good movement, farm-to-table has now been severely co-opted. The stories of restaurants deceiving their customers—or flat-out lying to them—have increased. Multiple San Diego restaurants claim to serve Respected Local, Organic, Sustainable Farm X when in fact they’re serving nameless commodity produce that could be from Chile, for all they know.

Restaurants have learned that aligning themselves with local, organic, sustainable farms makes them seem to be all those things by association. It’s the old practice of greenwashing—co-opting an eco-friendly brand in order to "wash" your own not-so-friendly brand.

Recently, a San Diego restaurant sold tickets to a dinner advertised as using Suzie’s Farms produce. Suzie’s owner, Robin Taylor, was surprised to learn about the dinner—especially since he wasn’t growing the produce listed on the menu. When he relayed word to the restaurant, the chef called to yell at him and swore to never use their produce again.

When farm-to-table was at its height a few years ago, David Barnes of Crows Pass Farms was famous for calling out dishonest restaurants. For instance, the time George’s at the Cove chef Trey Foshee—one of the city’s honest farm-to-table chefs—asked why he wasn’t offered Crows Pass cauliflower.

"Trey showed me a menu from another restaurant, and it had ‘Crows Pass cauliflower soup’ on it," says Barnes. "I went straight to the restaurant. A sous chef saw me walk in and he went out the other door. The chef was a little embarrassed. He got caught red-handed. I told him, ‘I’d love to sell you produce, but don’t use my name.’"

Another restaurant in North County—"a big, old fancy place," says Barnes—hired a new sous chef who was a friend of Barnes. The friend called to say, "I had no idea you sold here—Crows Pass is all over the menu!"

"They hadn’t bought a thing from us," Barnes explains. "I walked into the place with an invoice for $1,400. If you’re going to use my name, here’s an invoice for that."

Barnes raises a bigger issue: "Then I went down the menu and saw Kobe beef. I wondered, ‘How many other lies are on this menu?’"

Multiple industry insiders tell the same story of a famous San Diego restaurant claiming to serve an equally famous farm’s corn. (It could be legend, but the specifics—including the chef and the farm—are known to many sources.) One particular customer thought it seemed odd, since it wasn’t corn season. He asked the chef to come out. The chef became indignant and defended himself: "Yes, that’s from Famous Farm X." The customer replied, "I’m from Famous Farm X, and we’re not growing corn right now." He banned the chef from the farm.

"Chefs will come, write down notes, leave without buying anything, and then say they’re serving our food at their restaurants." - Tom Chino

Chino Farms is one of America’s most iconic operations. Alice Waters helped kick off the whole farm-to-table movement in the 1970s using bounty from Chino. They are the Apple, Inc. of produce—one of the most iconic brand names, with a cult following. Tom Chino’s family has earned that reputation over 70 years, and their produce naturally costs more. Makes sense, then, that Chino is the farm most often fibbed about.

Insiders say a common farm-to-fable practice involving Chino goes like this: A restaurant will claim to sell a "Chino Farms Salad." The price is significantly higher. In reality, it’s a bowl of commodity lettuce and vegetables, lightly garnished with Chino peppers or edible flowers.

At his roadside farm stand in Rancho Santa Fe, the soft-spoken, wry Tom Chino reluctantly agrees to talk about the issue. He’s obviously experienced it many times. "But I’m hesitant to say anything because, well," he says, pausing for a long while, "I don’t want to be a horse’s ass."

He laughs, though, at some of the more egregious examples. "Sometimes it can be very blatant," he says. "Chefs will come look [at what we’re selling that day], write down notes, leave without buying anything, and then say they’re serving our food at their restaurants."

Is fibbing about a farm really such a crime? It’s just a salad, after all.

"I’ve busted my ass for 23 years to get a reputation," Barnes of Crows Pass told me over a year ago. "I’m not making a ton of money. No one’s forcing me to live this life; I choose it. But if someone’s going to use my name, charge their customers extra money because of my name, and then pocket the money?"

Seafood fraud is rife in the restaurant industry; a 2012 study by watchdog group Oceana found that 39 percent of seafood in New York City restaurants was mislabeled.

Farm-to-fable defrauds a few different people. First, it defrauds the customers, who pay more for local, sustainable, organic produce. Restaurants that cheat are preying on food lovers’ good intentions. It also defrauds the local farm, by using its hard-earned "brand name" without paying it, or its workers, a penny. Finally, it defrauds other honest restaurants in the market.

"The restaurateurs that really do make the effort to buy direct from farmers, it’s tough for them," says Catt White, farmers market manager at Little Italy Mercato. "You often have to get the stuff to the restaurant because smaller farmers aren’t equipped to do deliveries. It’s definitely more costly. Smaller farmers aren’t subsidized like big farms. So the real cost comes into play. It’s expensive and admirable. For people to say they’re doing it but they’re not really—that’s really frustrating for the folks who are doing right."

Just ask Trish Watlington, owner of the Red Door and Wellington Steak House. She and chef Karrie Hills grow about half of their restaurants’ produce on Watlington’s small farm. They’ve spent hundreds of hours developing relationships with local purveyors for most of the rest.

"Farm-to-table is hip," Watlington says. "People want to think they’re eating locally sourced food. Restaurants are definitely leveraging that as a marketing technique. You have people claiming farm-to-table who have no idea where their product comes from. I could spend a lot more time being resentful, but it’s not really worth it. I just don’t like people who lie. Sell yourself for what you are. If you have a great interior and swank place, that’s okay."

"A lot of people still seem to be using our name. We’ve [joked] about a licensing fee."
- Robin Taylor, Suzie's Farm

The worst kind of farm-to-fable is the pure, intentional deception. There are less obvious ways of using the farm’s name. "What you see on menus and grocery stores is ‘We buy Suzie’s Farms,’" says White. "When in reality a couple of heads of lettuce do come from Suzie’s, but the rest doesn’t. By implication, customers assume the rest is coming from the farmer."

Or a restaurant will throw a "Famous Farm X Dinner." They’ll buy all the produce from that farm for the special event, reap all of the positive brand association with postings all over Facebook and social media. Afterward, they’ll never buy anything else from the farm.

In restaurants’ defense, sometimes it’s an understandable oversight. Maybe the restaurant did buy produce from X Farms and simply hasn’t updated its menu since it stopped. And let’s not overstate the controversy. Let’s assume a majority of restaurants and chefs are honest. But it’s apparent that this sort of thing happens enough to affect the livelihood of farmers and the people they employ.

A few years ago, Suzie’s Farms was selling $7,000 to $10,000 a week to local restaurants. Now they’re down to about 30 percent of that. "But a lot of people still seem to be using our name," Taylor says. Suzie’s will soon have to cut back their operations. As for Barnes, who started selling Crows Pass out of his van directly to San Diego restaurants 20 years ago (at the height, he was doing a half-million dollars a year in revenue)—he now sells direct to only two restaurants.

"We’re so done with that shit, farm-to-table," says Barnes, who now works as a general manager at Mountain Meadow Mushrooms.

As Connelly told me, "When you’re talking true farm-to-table, only a handful of people are doing it, but a lot of people talk about it."

There’s no solution in sight for farm-to-fable. New restaurants are just slapping "farm-to-table" on their signage, without any clear indication of what that means. Media is also to blame, often blindly using "farm-to-table" as an adjective for food that looks fresh.

A program by the SD Farm Bureau pushed by the County Health and Human Services—called San Diego Grown 365—seeks to verify the origin of food. Restaurants can sign a contract and guarantee that any dish they label with San Diego Grown 365 brand contains at least 80 percent to 85 percent food produced locally. But it’s been around since 2004, and only 87 individuals have signed up for the labeling, says Farm Bureau Membership & Project Manager Casey Anderson.

Tom Chino takes a grin-and-bear-it approach. "The old joke is someone will say, ‘Oh, I had some of your asparagus at this really great restaurant!’ Then I’ll tell them we don’t grow asparagus. So I’ll ask, ‘Well, was it good?’ They’ll say, ‘Oh yes, everything was great.’ ‘Well, then I guess it’s okay!’"

But on the flip side, if Restaurant X serves a really mediocre, out-of-season tomato and claims it’s from Chino Farms, customers aren’t going to have the highest impression of Chino Farms. That’s doing damage to a farm’s name.

Taylor has kind of thrown up his hands. "We’ve been thinking about maybe a licensing fee," he jokes. "If you want to just use our name and not our produce, you pay a fee."

Most restaurant professionals say it’s up to public education. If diners see tomatoes in the winter, they’re probably not from San Diego. If a restaurant is selling asparagus in summer, it’s probably not local, either.

Because of the fraud, many restaurants have stopped mentioning local farms at all. Which is a shame, since that should be something to celebrate and brag about. But whether it’s farm-to-table or farm-to-fable, White looks on the bright side.

"The good news is that people are getting more into greenwashing because there’s a perception that people care that they’re eating things that haven’t been loaded with pesticides," she says. "So that’s very motivational, that people are jumping on the bandwagon."

This is a general guide to when fruit and vegetables are in season in San Diego. There are exceptions. San Diego has long growing seasons, and greenhouses. But this is "peak" season eating: