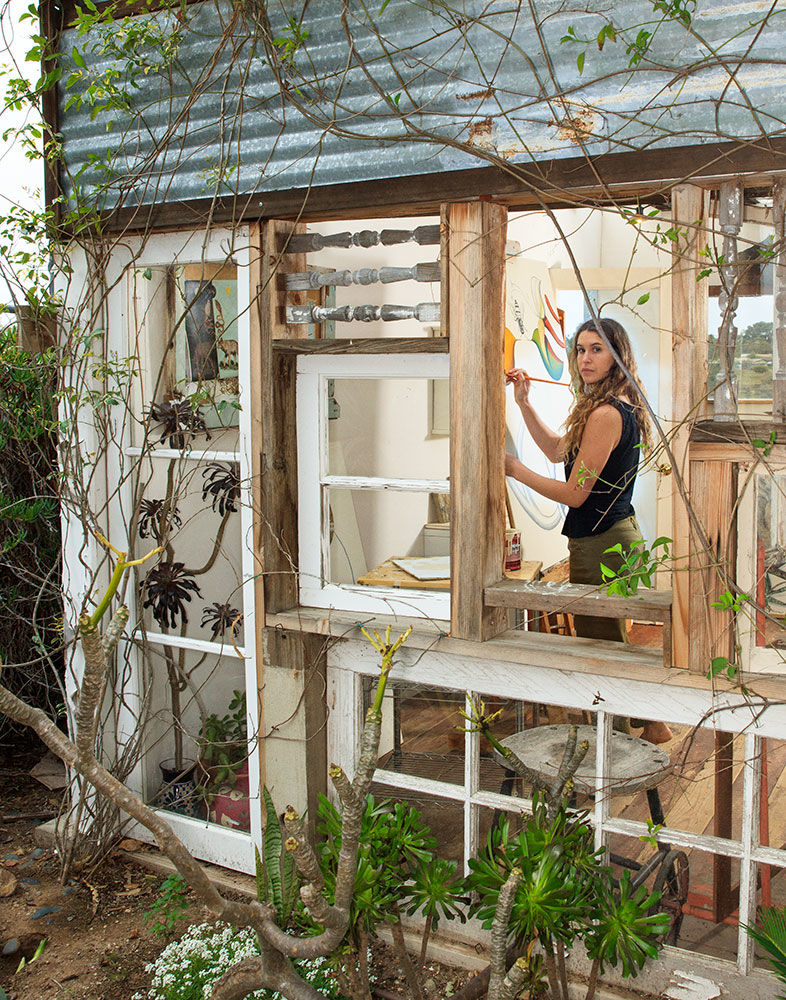 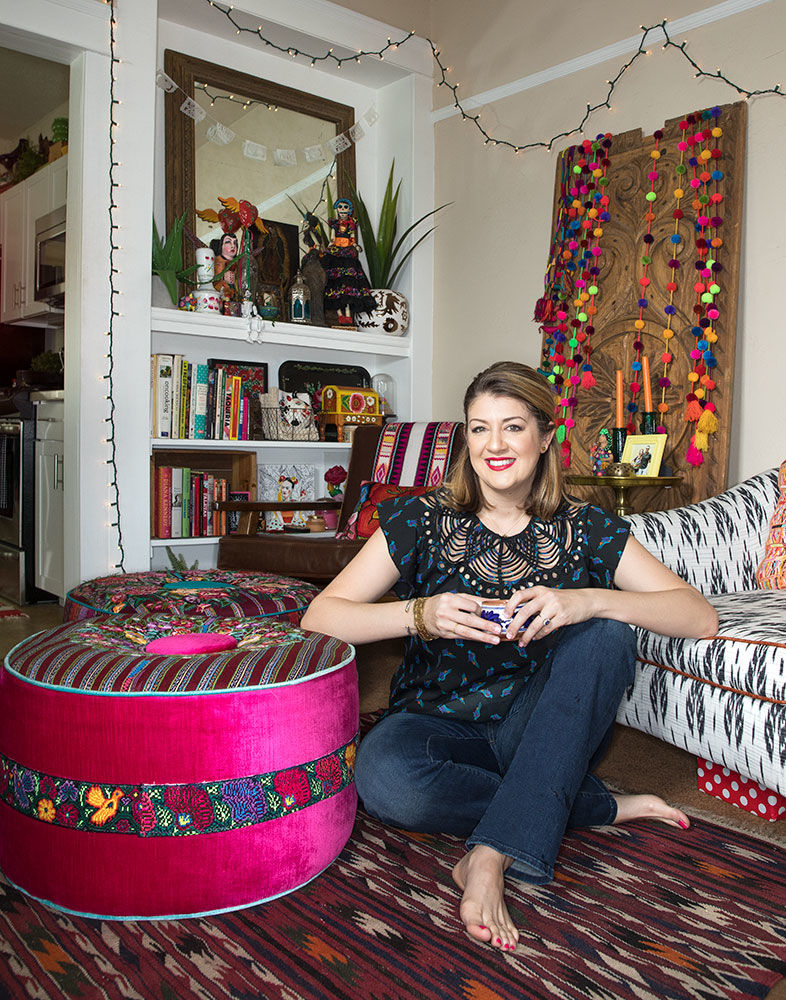 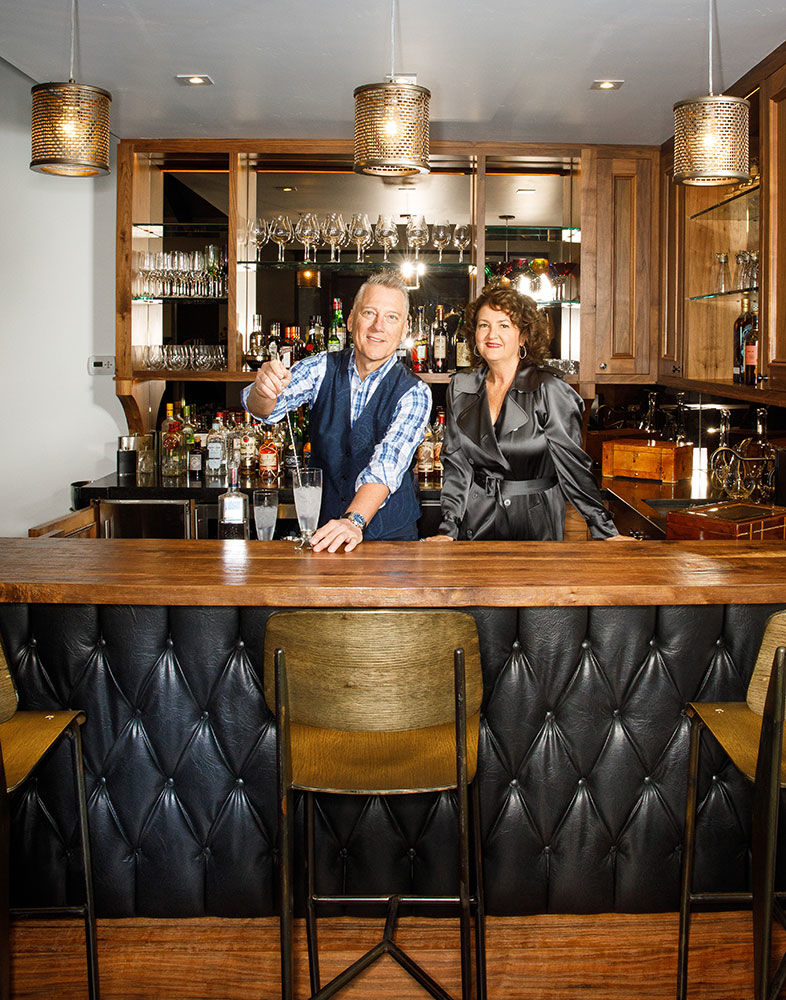 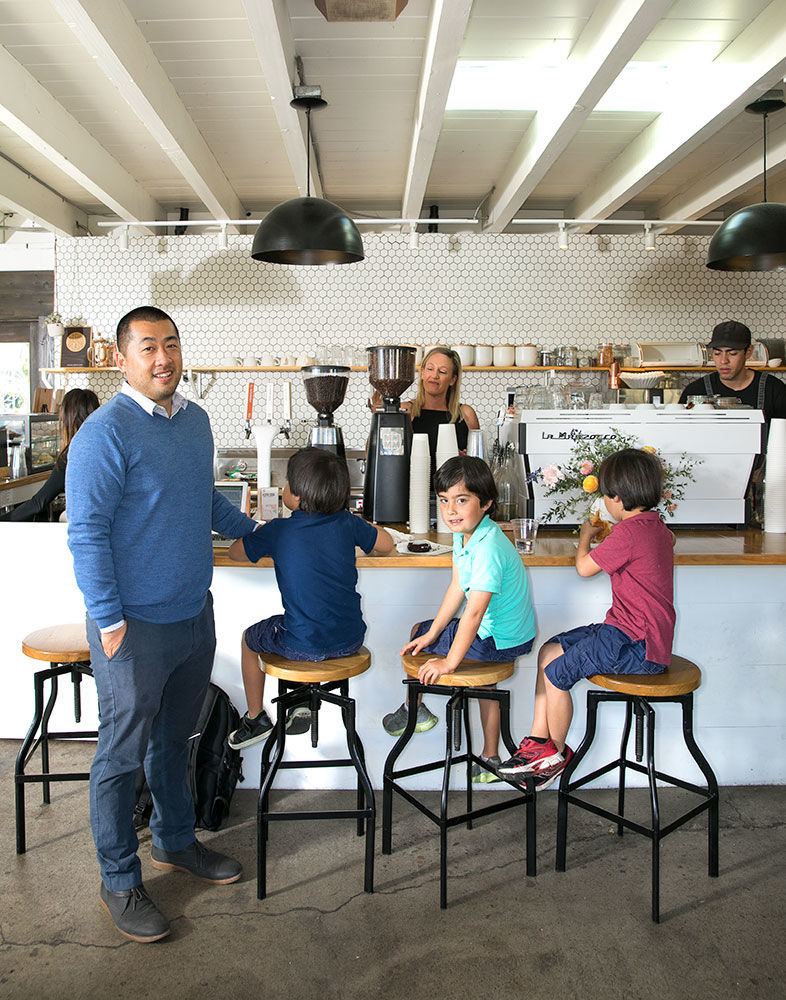 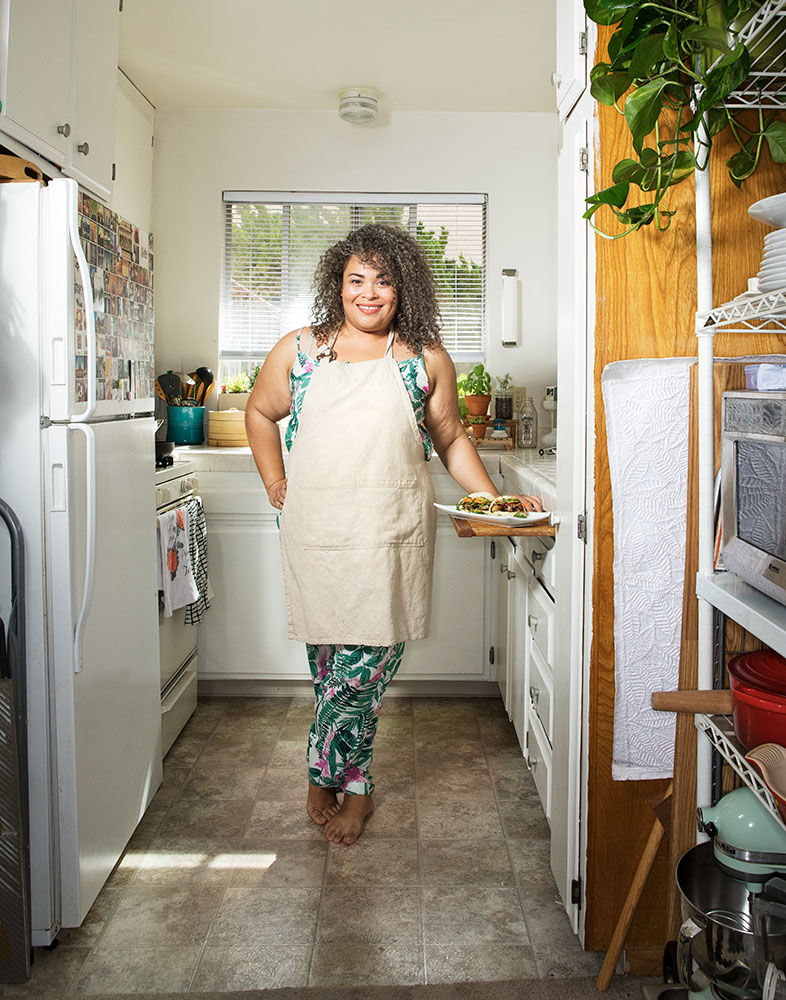 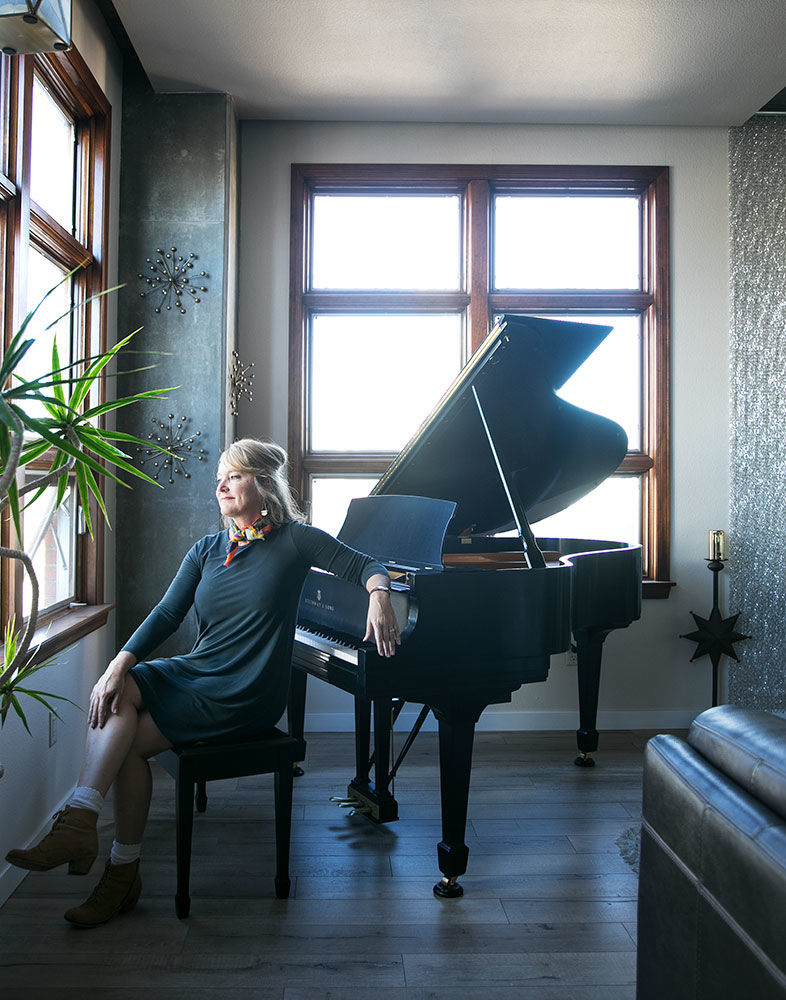 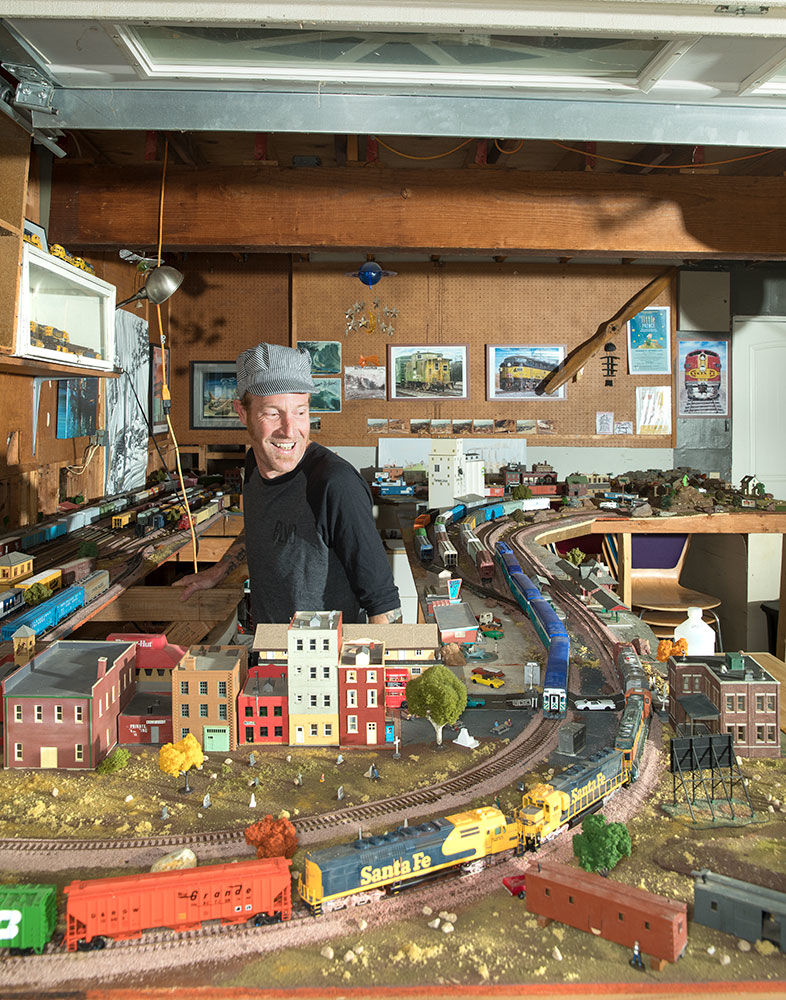 Natalie Bessell is not a night owl. She paints only in the natural light that pours into her "sanctuary," a studio overlooking Tecolote Canyon Natural Park.

Five years ago, Bessell’s boyfriend and her dad—world-renowned surfboard shaper Tim Bessell—built the space off of a freestanding window wall in her backyard, bordering a vegetable garden dilapidated by squirrels, rats, coyotes, and raccoons.

Constructed almost entirely from reclaimed materials, the studio is grounded by fence posts Bessell found discarded in an alley. The ceiling is reclaimed corrugated roofing material, strung with the same lights that run through her backyard.

But she doesn’t use them much, because her creativity flourishes most in the middle of the day, when the sun is shining and the wildlife that inspires her work is awake, when she can hear hummingbirds chirping and see falcons clutching doves in their talons. (The food chain is a common theme in her work.)

Like the antique frames, paint tubes, and easels that line the studio walls, at the end of the day Bessell says her space is merely a tool for her craft.

"The most important thing is the paintings that come out of it … and the inspiration that surrounds it."

Walk into Elexia de la Parra’s apartment and you might think you stepped into Artelexia, the kaleidoscopic boutique she launched nine years ago in Little Italy and moved to her own North Park neighborhood in 2017.

Both spaces are bathed in florals and folk art dedicated to her Mexican heritage. But as much as she lives her brand, it’s in this nook that she can let her hair down.

"My husband and I sit and have what we call our ‘coffee talk’ over cappuccinos with Oaxacan chocolate," she says. "Then after dinner, we’ll come here, turn on the candles. Miguel has mezcal, I have wine. We just chat."

The nook is anchored by his and hers chairs: an ikat print chair and two ottomans by San Diego–based Folk Art Project—a brand she sells in her shop—plus a leather chair from World Market. De la Parra has a knack for collecting, whether it’s the antique door draped in pom-poms from San Miguel Allende or Day of the Dead figurines alongside milagro charms. Shelves are filled with books on Mexican folk art and cooking, evidence of her culinary arts degree.

"Color just makes me happy," she says. "I sit here all the time and I tell my husband, ‘I love our space.’ It makes me extremely happy."

David & Rebecca Vigil, Board Member & President at Pinarello US and Retired Court Reporter

It’s spokeeasy, not speakeasy. That’s what the Vigils call this tricked-out entertaining space in their six-bedroom Rancho Santa Fe abode. The name’s not past tense—it nods to David’s love of cycling.

"I have a vision of opening a bike shop that turns into a speakeasy by night," says David, who worked at Qualcomm for 20 years before joining the high-end bike brand Pinarello. "I even have the domain name."

To enter, they press a button in their library. Inside is a wooden bar with Monkey 47 gin, Pappy Van Winkle’s, and Suntory Whisky, to name a few. "We were into mixology before the craze started."

On the other side of the 1,100-square-foot room are quirky paintings, two TVs, a golf course view, a pool table, and a Louisville Slugger signed by Tony Gwynn. The Oscars, Super Bowl, Christmas—they’re all celebrated in the spokeeasy.

"We can have a lot of people here. We have all we need for entertaining, and we can go outside for sunsets," Rebecca says. "It’s a party room for friends and family—and we come in by ourselves, too!"

A few times a week you can find Tom Wong with his "back to the world," totally engaged in his laptop at North Park’s Communal Coffee. He’ll have his headphones in and his go-to, espresso and black tea.

Wong has triplets at home and research assistants in his office at UCSD, so Communal provides the perfect low-stakes hum of distraction—the bustle of baristas, Wu-Tang Clan playing over the speakers—to most productively analyze his data.

"When I need to unplug, I’ll literally unplug my headphones and swivel my chair around," he says. "This data, it has to be perfect."

That’s because this data is personal. It’s validating DACA, which Wong could have been a recipient of, "if I hadn’t gotten married," he says.

Wong didn’t know he was undocumented until he tried to get his driver’s license at age 16. He married his high school sweetheart and dedicated his career to immigration and citizenship studies. In his last year of graduate school, his triplet sons were born: Soul, Pace, and Ever.

Seven years and a stint as an advisor in the Obama White House later, Wong occasionally brings his boys to his favorite space to show them how he lives out his American dream—from a swivel stool at Communal Coffee.

Holly Haines’s microwave, mixer, skillets, and cooking utensils are in her living room. Her dinner and drinkware, too, have received the kitchen-cabinet boot.

That’s because her "impossibly tiny kitchen," as she puts it, is reserved solely for her ingredients—spices, flours, "so many salts," four different types of butter, a basket of soy sauces, year-old unopened anchovy paste. "I need it all," she says of her University Heights space. "I could make anything out of this kitchen."

A full-time web designer and, for fun, a private chef and food blogger at From My Impossibly Tiny Kitchen, Haines learned the art of comfort food from her mother. Her love for cooking went viral when she competed on NBC’s Food Fighters in 2015. She’s releasing a cookbook, How to Eat Your Feelings, this spring.

She moved into her "so ’80s" one-bedroom apartment nine years ago. At the time, the gas stove was the only thing that turned her on to the 64-square-foot kitchen. Still, Haines made do, lining the windowsill with living herbs and "organizing in a way that’s quick for me."

Obviously, it’s a love/hate relationship with her favorite space.

"The kitchen is where I’m comfortable," she says. "I love it for what it is."

"My whole life, the thing I’ve loved other than cheese is music," says Gina Freize. After 14 years of educating San Diegans about triple creams and blues at gourmet cheese shop Venissimo, she and her husband finally made good on their dream of moving downtown. It’s just the two of them, but they’ve got an inanimate roommate in the beautiful black Steinway that first left the factory floor on December 1, 1936.

Situated between two corner windows that look out over city life below, that bench is where she holds court with friends, playing pop songs and some basic Mozart ("I don’t venture off the key of C when it comes to Mozart," she says). "I’ve always wanted to live downtown. Having this loft space has been a dream forever. I can see the planes fly by my window every 30 seconds. I’m always dreaming if they’re just visiting or living here, and if they’ll love it like I do."

Also nearby in the loft is a 35-pound stone hippo that she and her husband bought while on a safari in South Africa. "They said it would take six weeks to get here. It took six months. So we named it Hope the Hippo, because we weren’t sure if it’d ever make it."

When Davin Waite first got sober, he needed something else to mess around with. "I couldn’t just surf all day," he says. The North County native hit rock bottom with drugs and alcohol years ago, but after becoming sober, he built a reputation as one of the city’s top sushi chefs at Wrench & Rodent. The life of a chef, husband, dad, and small-business owner isn’t an easy or sane one. Waite has a live-wire, high-energy personality, but he’s learned to focus it on better things—like the train world in the garage of his Oceanside home, which helps calm any lingering stress reactions.

"I was born into trains," he says. "My dad’s a train nut. We grew up watching trains by the tracks in Carlsbad." At a train swap meet when he was a kid, he noticed a custom model of Carlsbad’s historic south Twin Inns building, which is now home to his friend Rob Ruiz’s restaurant, The Land & Water Co. "I had a few hundred bucks in my pocket," he recalls. "The guy said, ‘Oh, give me $5.’"

Other pieces, selected over 30 years, also evoke events from his life, like a locomotive he had custom built to mirror the tattoo on his arm, or the London bus from his family’s time across the pond. It may never be finished. "The fact that it’s half finished is important. I’m terrified of finishing it."