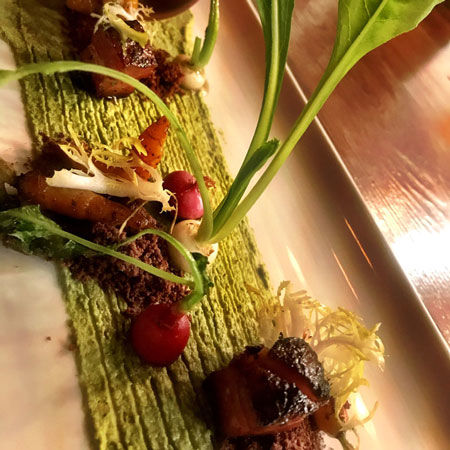 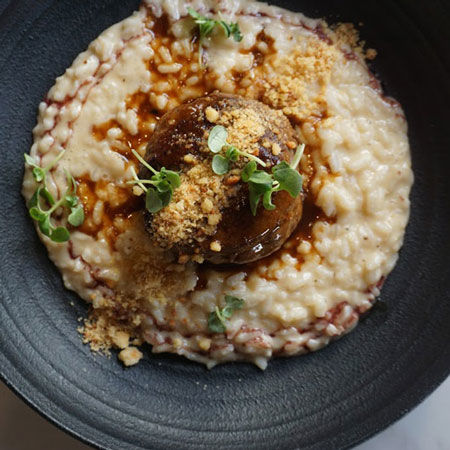 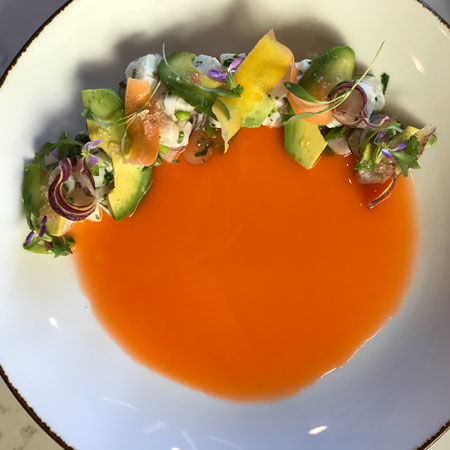 Rancho Bernardo is best known for its golf courses and planned communities, not its modern cuisine. But I’d heard good things about Scott Cannon, the young executive chef of The Cork & Craft inside Abnormal Beer Co. Friends beleaguered me until I finally listened to them and paid him a visit for his 12-course tasting menu called "The Abnormal Experience." And my friends, chatty and insistent though they may be, were right. Cannon is really cooking. Like this dish. Presentation matters. You eat with your eyes before your mouth. It’s designed as a garden mishap, vegetables spilling out of a fallen pot. Art’s cool. But it also needs to be delicious, and this may be his best dish of the night. Root vegetables are roasted and then toasted in a maple balsamic and laid over a swipe of carrot-top pesto. The "soil" is cocoa nibs two ways, first with burnt pumpernickel, brown sugar, salt and pepper, and cocoa powder. Second, he takes that same mixture and melds it with goat cheese and brown butter. Take a gander at the photos and dish descriptions of the best we ate during the visit.

Roman chef Marco Maestoso is spearheading a new "chef-to-table" idea over at this airy, modern spot in Hillcrest. Sit on the shaded patio. Chefs roll carts around featuring specials of the day, each with a price displayed. Definitely try the pinsa, which is a rice flour, soy, and wheat riff on pizza that eats so much lighter (and with less wheat/gluten) than a regular pizza crust. But then splurge on the risotto, because eating light forever is being sad forever. On a base of 40-month old "vacche rosse" Parmesan cheese risotto (made from red and white Italian cows), an American Wagyu is set in the middle of dish, covered with house demi-glace. The meat is cooked sous vide at 129.2 degrees on the verge between rare and medium rare, and the plate is finished with a red wine reduction and crispy vacche rosse Parmesan cheese. The meat just falls apart. See this story for a full rundown of the best dishes we ate during the visit.

No one will ever confuse Viejas with the Cosmopolitan in Vegas. It’s a smaller market. But by recently finishing up their seven-year, $170 million renovation, it’s now a very nice, elegant resort on par with most of the City of Sin. I recently stayed at their adults-only Willows Hotel & Spa. The art is not cheap. Modern, even cutting-edge and inspiring. The rooms are built of sturdy, elegant materials (woods, marble, heavy earth stuff). The bathrooms are the size of my cottage. As part of the new Viejas, they’ve brought in some culinary talent, too—namely at Locale. This is something even Vegas couldn’t do: a restaurant featuring local food (Vegas would be forced to serve sous-vide coyotes on nopales). The chef is Antonio Votta, who served as chef de cuisine for MB Post in LA under chef David LeFevre before serving as exec chef of Michael Mina’s restaurant R&D concept, Mina Test Kitchen. It’s an inspired project. Try his local halibut ceviche with heirloom carrot aguachile (a lime-based marinade created in Sinaloa, Mexico), cilantro, and radish. The carrot-lime marinade is a delicate balance between earthy root veg and bright citrus, and looks like a small pool of Tang, the 1980s astronaut beverage.