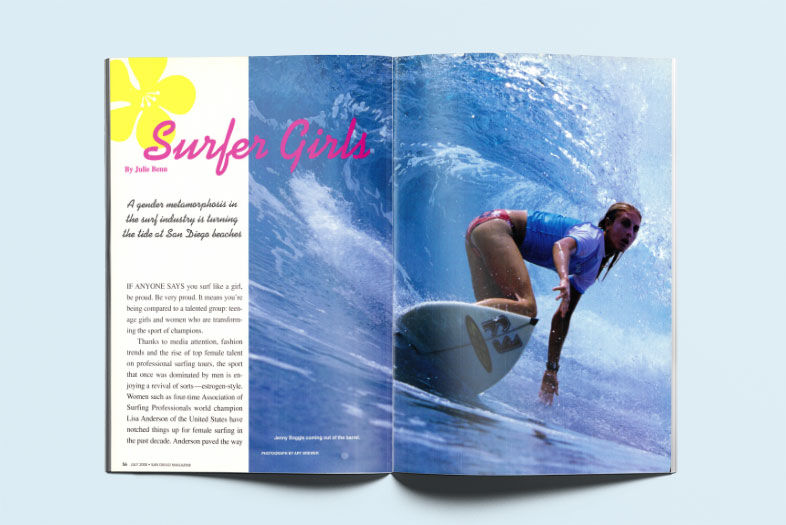 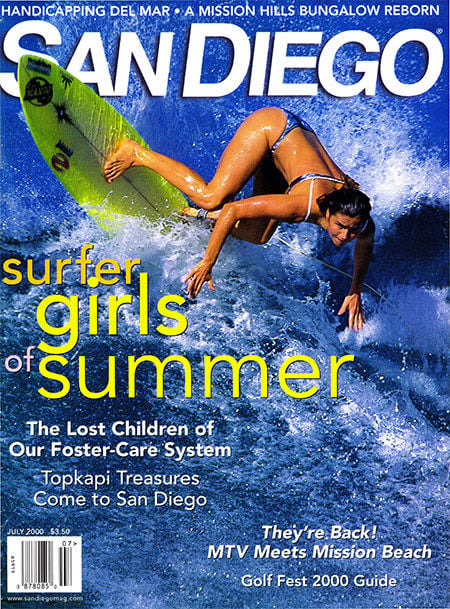 Surf culture is practically synonymous with Southern California. But in the ’90s, it was uncommon to see women paddling out. You couldn’t buy a pair of board shorts for women (Roxy wouldn’t develop them until 1993), and good luck trying to find a rash guard made for women in a surf shop.

Something shifted around the same time the Y2K panic fizzled out—there was a sea change in women’s surfing.

In this magazine’s July 2000 issue, writer Julie Benn looked into this turning tide in "Surfer Girls of Summer." For the cover story, she spoke to instructors at Surf Diva, a woman-owned surfing school in La Jolla that still operates today. "When I moved out here from Hawai‘i in 1997, I paddled out to Scripps Pier, and I was the only girl out there. Now every third surfer is a woman," instructor Aimee Antipala told the magazine.

Benn’s article noted that if a woman didn’t have a brother, father, or boyfriend willing to teach her how to hang ten, she would have no chance to learn. Surf Diva cofounder Isabelle Tihanyi said her school was created to close that gap and to make women feel welcome in the water. When she launched the business in 1996, she had only a handful of female students. Three years later, that number increased to 3,000.

Surfer Jerry Sanfilippo told the magazine that he supported the new wave: "I’d like to see more women paddling out—and with the upswing of womens’ pro surfing, that’s probably what will happen." His prediction was right, because the wave kept rolling, in San Diego and on other shores. In 2000, professional female surfers like Layne Beachley and Megan Abubo were making headlines in the Association of Surfing Professionals World Tour (now the World Surf League). Women’s Sports and Fitness magazine declared that surfing was the "it girl" sport of the year. 2002 saw the release of Blue Crush, a movie based on journalist Susan Orlean’s story about surfer girls on Maui, and the surfer girl look—complete with puka shell necklaces and board shorts—became a fashion staple even in landlocked cities.

Women have come a long way since. In 2018, the World Surf League, which runs professional surfing tournaments around the world, announced it would enforce equal prize money for both men’s and women’s competitions. The largest women’s surfing competition in WSL history, the Nissan Supergirl, happened right here in Oceanside in July. And next summer, 20 female surfers from around the world are going to compete in the Olympic Games. There’s never been a better time to surf like a girl.