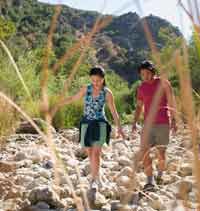 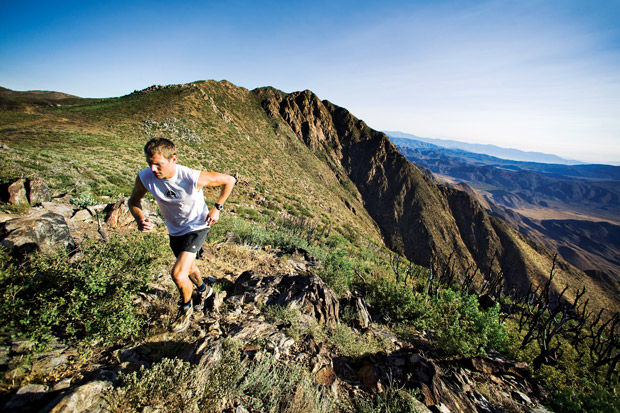 running a trail in San Diego

Mount Woodson in Poway is not for the faint of heart. Beginning at the shores of Lake Poway, the trail greets hikers with a gently sloping, unpaved path, but it soon steepens and rarely shows mercy for the rest of the trek. However, from the top the views have been known to allow hikers to look over downtown, the Pacific Ocean and Mexico. Mount Woodson may not be for all, but it certainly rewards those who make the effort.

The Palomar Mountain Observatory Trail is known for its well-maintained look, spectacular beauty and awesome views. As it is in the mountains east of San Diego, hikers should be aware of rattlesnakes and mountain lions around them. At the end of the hike, the Palomar Observatory is easily reached and visitors are welcome from 9 a.m. to 3 p.m. (or 4 p.m. under Daylight Savings Time) year-round except Christmas Eve and Christmas.

Located north of picturesque La Jolla, the Razor Point and Yucca Point trails are easy, relatively short and can be enjoyed by anyone. The two paths share the same trailhead, and both offer views overlooking the Pacific Ocean. The beach is accessible from the Yucca Point trail, which has an elevation change of about 200 feet. Razor Point’s change in elevation is comparable, making both hikes nearly identical in difficulty. It could even be said there is lack of much difficulty at all.

The Cuyamaca Peak Loop hike is a great experience for those who want a long, challenging hike with different routes to the top. Located near Julian, climbers have their pick of the Conejos Trail, Azalea Glen Loop Trail, Azalea Springs Trail, West Side Trail and the Azalea Springs Fire Road. Once at the top of the second-highest peak in San Diego County (6,512 feet), accomplished hikers should enjoy the view of the surrounding Cleveland National Forest and Cuyamaca Rancho State Park after their 1,700-foot elevation gain.

This extremely popular hike may be the most traveled in the county, and according to the "Afoot & Afield" hiking guide, it is more popular than Mount Fuji. The Cowles Mountain hike, located just west of El Cajon, is a quick trail that offers just the right level of difficulty for anyone. Low lying plants and a lack of trees add to the trail’s clean, well-groomed look, and from the summit hikers can see Lake Murray below, the ocean, downtown and Mexico.

The hike to the Devil’s Punchbowl might be one of the most dangerous in the county. The San Diego Union-Tribune reported in 2005 that about one person dies here each year. The allure lies at the trail’s destination. Surrounded by 75-foot high cliffs, a magnificent waterfall splashes into a pool known as the Devil’s Punch Bowl. Hikers have been known to dive from the cliffs into the pool, but because of shallow waters and slippery rocks, it is highly dangerous. Additionally, hikers (or swimmers, depending on what you’re more excited for) should bring plenty of water, as this hike is not for those out of shape.

For adventurers in need of a leisurely stroll overlooking the beach, the trail beginning at the north end of the park leads hikers on a long, relaxed hike through the hills and shores. Dogs are not allowed and according to the website, free tours are given by rangers every Saturday and Sunday at 10 a.m. and 2 p.m. Because of its lack of difficulty, long distance and ocean-oriented views, this trail is great to spend time with that certain someone.

The Iron Mountain Trail, like the Mount Woodson Trail, is located in Poway and is a good, standard hike. It starts off straight and slightly uphill, but soon curves upward into the eastern mountains. The trail is well maintained and the surrounding area is pockmarked with large boulders that are great for climbing. Hikers will feel like they are miles from civilization, so if you need to get out of the city or suburbs for a few hours, look no further than here. More info: http://www.sandiegohikers.com/Hiking-Trails/Iron-Mountain-Trail.html

The variety of trails in William Heise County Park should leave any hiker satisfied. At more than 4,000 feet above sea level, the 929-acre park truly has a mountainous, forested feel. This park is so satisfying, some people don’t even leave at the end of the hike. Campgrounds are available for those who want to stick around for longer than just the day, as well as showers, restrooms and cabins. For an overnight or weekend trip east, William Heise has you covered.

Hikers on the Los Peñasquitos Canyon trail are treated to waterfalls, river views and great scenery, all without heart-failure-inducing elevation changes. Perfect for a nice, smooth stroll, Los Penasquitos makes for an awesome family hike. The kids will love the river and waterfalls, while parents will comfort in the safe area and wide paths. One reviewer on the website calls it, "basically a walk in the park."